My mother is Italian-American, and grew up singing opera in churches and loving opera. My father is a Nuevo Mexicano who migrated here as a child from Guadalajara. So me, I’m a mestizo, mixtupo,” says John Jota Leaños, laughing. The recipient of the 2012 Guggenheim Fellowship in Creative Arts, also recognized as one of the country’s 50 greatest living artist by his 2011 United States Artist Fellowship, describes the influences that have informed his identity and his art from its very beginnings.

Expanding borders and dissolving conventions in a most 21st century way is at the heart of Leaños’ art form. His new media opera, Imperial Silence: Una Opera Muerta, is a primer in the mixing, remixing and repurposing of art forms and cultural artifacts, which he says starts with “taking dead stories without meaning, without a soul, in an attempt to  ‘indio-fy’ them and bring our Xicano and Native perspective.” 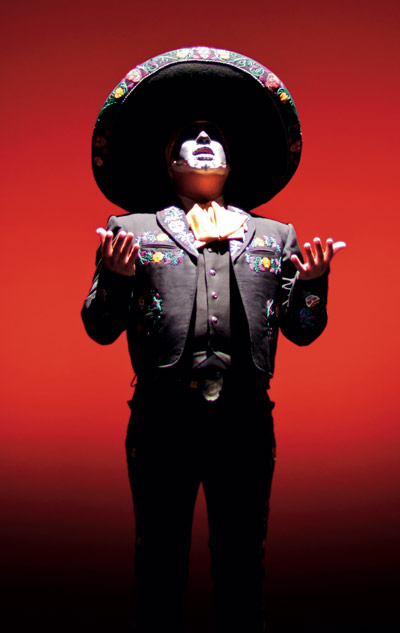 To create and perform Una Opera Muerta, Leaños assembled a team of virtuoso Xicanos. Each facet of the piece has them applying their diverse talents to cross a multitude of conceptual and artistic borders. It’s even difficult to find terms that describe all that the piece really encompasses, which includes live performance of music blending mariachi, rap and blues; dance meshing folklórico with other styles, and all of this interacting with projected animations to dissect concepts such as war, empires, dissent and censure.

The music includes both original compositions as well as versions of traditional pieces, performed live by Los Cuatro Vientos, a renowned Arizona-based mariachi ensemble (mariachi in the very earliest and traditional sense – arpa, jarana and two violins), led by J. Javier Enriquez. It’s a north of the border mariachi, that sings in Spanish, but as Enriquez says: “We’re a little bit pochos, but mexicanos de corazón.”

Additionally, electronic music for several portions was composed by Cristobal Martínez, DJ/Producer, composer and tech/visual artist (who also did the programming for the delivery system of the animation). It is intended to celebrate what Martínez calls the “Xicano-Rascuache-Native American appropriation and re-use of new media.” He speaks passionately of co-opting the centuries-old tradition of opera, by “tricking it out” with images, colors, vibrant dance and music, comparing it to the artful resourcefulness exemplified in low-rider culture. 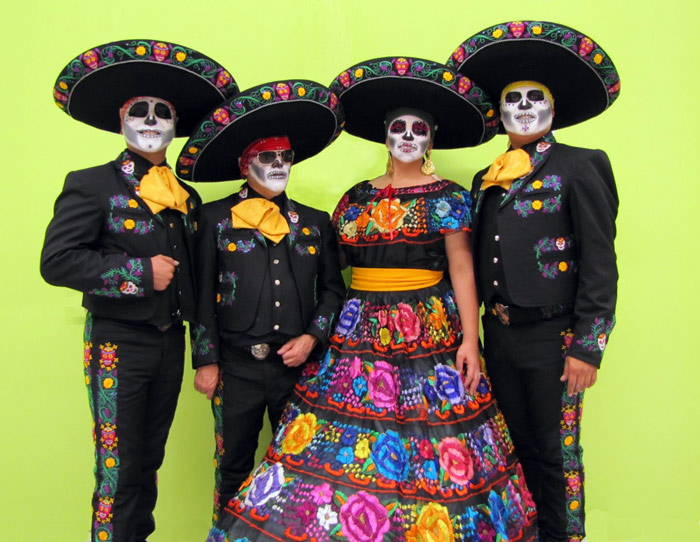 The live performances of the new media opera also include dance, choroegraphed by Joel Valentín-Martinez, a senior lecturer in Dance at Northwestern University in the Theater Department. Valentin-Martínez hails from a small town near Guadalajara, and he applies his background in modern dance, as well as West African dance and Flamenco to mesh all of these with Mexican Folkloric dance styles. In Una Opera Muerta, he also incorporated movements to reflect current events related to immigration and the border, and he gives examples of such in how he added arm movements outside the tradition of Mexican folkloric dance to reflect bodies crossing the desert to get to the U.S. side.

Even generational borders are crossed, says DJ/Tech Artist Martínez: “We maintain the spirit and values that have been bestowed upon us by our ancestors. But we use new media  – the literacy that the younger generation speaks in addition to the live mariachi that is the language that our elders speak.” It is also important to incorporate traditional Mexican arts forms says playwright Leaños, to rescue the cultural tenets of the borderlands, such as mariachi and corridos, which are sometimes not respected by either culture, and place them on a performing arts stage, where their art can be valued.

Conversing with the principal creators of Una Opera Muerta left me with reeling at the visions of an emergent Xicano culture and its social art, giving witness to what Leaños affirmed: “Those of us that are north of the border are on the cusp of a new expression.” Or as Martinez puts it: “We are adept at adapting. We can appropriate white man’s art to breathe new life into it.”

Imperial Silence: Una Opera Muerta will be performed at the MCA on Sept. 14, 15 and 16. Los Cuatro Vientos will also jam on September 15 at the MCA.

Check Catalina’s radio show Beat Latino  (On FB and iTunes too!) as well as recent NPR features to explore the past, present and future of Latin music.