Someone once said “everyone in the United States [although many countries wrestle with similar paradoxes] has to think about Christianity whether they are Christians or not.”

I took that to mean we are all steeped in the fallacy of the separation of church and state. And because that line of separation really doesn’t exist, we are either resisting the very notion of Christ or defending our beliefs, even if they are displaced.

“Raskols: The Gangs of Papua New Guinea” guides its readers through many difficult journeys. Visual and textual narratives about hardships due to the forceful policing that thrust its way through Papua New Guinea taking away from its people, rarely giving back without sacrifice. The famed photographer, Stephen Dupont, as described in his bio, captures “hauntingly beautiful photographs of fragile cultures and marginalized peoples.”

If fragile—in this sphere—means reckless, misogynistic and anarchist-laden then this book is indeed the worst kind of fragile. In fact brittle, and hollow enough to birth such ideas that say:

“…I’m bored; I have nothing to do today; I think I will go and murder Joe down the road before lunch. Then have a bowl of rice and tin fish and go rape the first thing I see with breasts (animals included).” -unidentified Raskol gang member.

Dupont’s documentary-style presentation of people’s lives (ethnographically-speaking) holds a lot of weight and responsibility as it is waxes and wanes in its biasedness. From the get-go we are ushered into this foreign world that seems distant and already too uncivilized to not be documented in a primordial-like stagnation of a downward spiraling nation. It would of course be too irresponsible (and too pre-21st century) to not find humility in an already, seemingly, de-contextualized glorification of an amoral place. We must understand, though, that New Guinea has had a tumultuous post-colonial relationship with Australia and like any country that fell out of the rule of another country, resources, bodies of government, and an entire way of independent living takes time. The light in these stories is in the hope of the people who—like stated above—use the tools of Christ or a better past to get through the torturous reality of today. 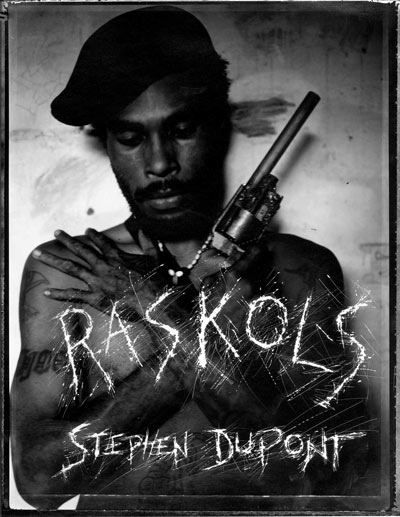 I found myself saying, there has to be more than this. Where we realize, while looking at the images critically, the book has gaping holes, the stories of struggles and the impact of neo-colonialism is only alluded to; an the opportunity to delve into the epistemology of gangs—or at least a real narrative from the subject-matter—and enigmatic-nature of a rarely depicted place, is largely missed—similar to a Disney-style idyllic picture.

In this photographic essay, distributed by Powerhouse Publishing, we hear evocative stories. Visual ones, layered with textual exposition by photographer Ben Bohane, Dupont and gang members, from their own words.  The actual writing, sometimes written in type-font or scratchy, stylized hand writing, elucidates some of the societal shifts that, in many ways, provide a breading grounds for gang culture which can be about sustainability for the poor or self-indulgent camaraderie.

Visually, we are forced to confront the guns and the wounds the people carry on them so nonchalantly. We are forced to evaluate the head-on shots (gun barrels and all) of the many men—often juxtaposed by dilapidated buildings or grimy backdrops—and to be in the midst of conflict and empathize with their illumination realized by the end of the book, or witness a slip deeper into darkness.

Religion—Christianity in this context—is clearly a tool for spiritual guidance that invokes a sense of self-awakening because of how personal and enlightening spirituality can be. It’s also about neo-colonial subversion, power and manipulation. In many places, like Papua New Guinea, war exists because certain religious doctrines, as well as socio-political struggles, pushes citizens into corners when the ability to just be threatens those in power.

Separation is often propelled by many deities and whole countries are sometimes torn apart by ancient scripts that cannot be proven outside of the miracle of life. Raskols has a surmounting viewpoint, roping together the once comfortably polarizing concept of good and evil into a hazy ritual, dancing around pistols and crucifixes near the knees of dark forces.

Steven DuPont explores the depths of the level of society that is on-foot–post Australian colonial reign—where the outlaws rule and corruption has a red-blotted dial on the region’s moral compass.

As explained towards the latter part of the book—where we see negatives of multiple gang members threatening us with weapons (in hand and on their faces) if we dare to look away.

Inspiration for the book took him on a seven year journey with the photographs, he originally took in 2004, then returning only to discover, to DuPont’s wonderment, several were dead, some changed their life around while others declined further contact, and obviously some, though not many, continued their life as Raskols.

Dupont’s own ethos clearly informs the book. He is Australian and white whereas the subjects are Black and Brown free to live in the aftermath of the former Australian rule. No easy feat for any country living in the shadow of their former territorial status. The trajectory of his previous work is that of a privileged, yet an honest ethnographic vantage point where he constructs a point-of-view from a small piece of a larger picture.

The possibility of nuance is there, with infinite themes from the significance of its particular geographical landscape to the ills of masculinity and gender conformity right down to the religious dimensions. The images themselves are quite fascinating and worth the purchase because of the vulnerability and rawness of the subjects. Problems aside, Dupont skillfully captures the beauty and an essence that takes dexterity and a hell of a lot of photographic experience.