Alphabet Soup, the latest group show put together by Logan Square’s Galerie F, represents what Chicago graffiti has become. Whereas certain media associates it with violence against humanity, this show chooses to break that line by exhibiting thirteen artists with solid graff based backgrounds.

“The whole thing is based around letter form and design. All these artists have radically different styles. Stylistically each one is an individual that we felt the best name we can come up with was Alphabet Soup, which is a soup full of a bunch of letterforms. That’s exactly what we sort of intended the show to be…Grab a bowl!” says Fonzo, co-creator of Alphabet Soup and a participating artist.

Originally a concept derived from Melon, who with the help of Fonzo, was able to realize his concept fully. This show incorporates local writers from all over the city with exception to one participant who has become part of the local scene. Participating artists include Amuse, Asend, Cove, Fonzo, Jash, Kane, Like, Melon, Mime, Omens, Sege, Shipwreck and Three. The theory behind the show is to showcase not necessarily the graffiti writer, but what they have become.

“There are categories of graffiti, just having graffiti, definitely brought us to a different level in our lives; reflective of what we do and the type of people we are,” says Melon, co-creator of Alphabet soup and participating artist.

Not many will share the same appreciation for graffiti being inside the gallery than they would a street sign, dumpster, or train panel. Despite the mixed emotions behind it some, including participating artists, beg to differ.

“I don’t have a problem with it personally,” explains Kane, participating artist and representative of Chicago graffiti. It’s this thing that takes on so many interpretations. Graffiti as an aesthetic, I can recognize it as some visual parameter that people want to work in.”

“A lot of people that admire it don’t really get to see it in their face. I think it’s a great way for them appreciate our work,” says Asend. 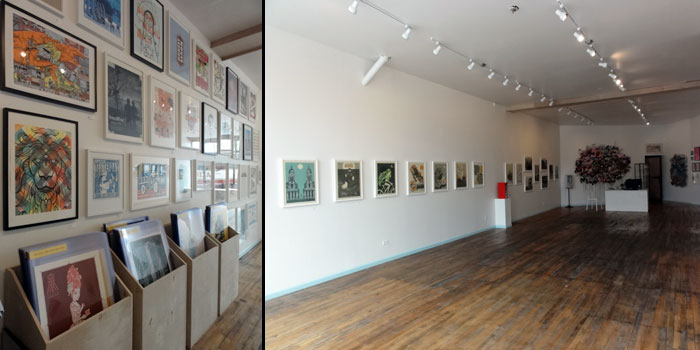 Due to the amount of participants in the exhibition, canvases were given a maximum height requirement of 48×48 and must include some sort of letterform. The application of graffiti to canvas can open channels to the younger generation of graffiti writer and also to the general public who share an appreciation for it.

“I think graffiti artists are some of the best artists in the world because we have an understanding of composition, color theory, balance and these are just art elements that they teach you. A lot of the stuff we just taught ourselves throughout the years; seeing the old school writers do their artwork and we push it and we take it further and so on,” says Asend. “The new kids that grow up and see our stuff will make even better artwork. That’s the beauty of it.”

You might wonder to yourself, “Why not just put together a wall that can be out in the open?” Because permission walls can be ignored. People walk past them like they’re nothing, and it will only attract the same demographic as usual, graffiti writers. This is something for all to come and enjoy.

“I think it’s because we grew up around taggers and writers, we just subconsciously went in that direction,” says Fonzo.

“I just want to put out good images, strong images,” says Cove, who has worked with Melon before on a show called Art & Gluttony. “ I don’t have a clue what people are expecting or looking for… hopefully people will respond to it positively.”

Each participant has taken time to visualize a concept and transfer it to canvas, some turning away completely from spray paint and picking up a paintbrush instead. All work has been super secretive, and as Cove put it himself: “I want to be surprised too.”

“I saw a couple of paintings that Cove was working on,” says Kane. “His art is oil on canvas. They’re really vibrant, soft edges, dealing a lot with color theory and ambiance and creating some kind of environment and climate just based out of pure color. Its really nice to see that coming out of his work.”

Asend who typically does a form of wild style has chosen to abandon the concept and focus on something simpler, also focusing on color rather than clean lines or letter structure, also containing his vision to three letters.

I’m adding some lines in there to detail the letters and the letter structure itself,” says Asend. “Unless you have a great understanding of graffiti you don’t have an understanding about how wild style works.”

Usually these types of galleries are given a chance to exist in small spaces such as tattoo shops or some open space in a storefront, nothing too inviting to larger crowds. However, Galerie F has been completely renovated down to the drywall and allows for a grander audience to enjoy these particular works in an inviting area with space to walk around in comfortably.