When my editor asked me to review the debut album by DC-based group The Archives, I was going to reply politely, “I don’t do reggae.” I mean, I enjoy reggae — who doesn’t, right? Bob Marley and Gregory Isaacs seemed to possess the remarkable ability to make people unwittingly bob their heads, like something out of Beetlejuice. (I know the song was Harry Belafonte and calypso, but just go with it.)

Nonetheless, I decided to give the album a listen, and I’m glad I did. The Archives are definitely onto something, and their lyrics are refreshingly perceptive. Before I go any further, don’t get it twisted. The beats, produced by famed Thievery Corporation DJ Eric Hilton, are ear honey — at times, reminiscent of all the classic reggae jams produced by Tuff Gong himself; at other times, a mixture of soul and jazz. But I’m a lyrics lover, first and foremost, and the lyrics and themes on this album are socially provocative from the moment you press play.

“Who’s Correct” is a track about religious tolerance, the first verse saying, “They tell me there is one way, and one way alone/ Without reason, and with blind faith alone” — bold words with which to launch your introduction to the word. Yet, The Archives march forward undaunted: “Now, I see where you’re coming from, but I disagree/ What we seek to find is not in the sky, but it dwells in you and me.” (A nice change of pace from Wiz Khalifa or Rick Ross, wouldn’t you say?)

The second song, “Ghetto Gone Uptown,” preaches about how the current economic crisis has made things worse for the country’s inner-city neighborhoods. Lenny Kurlou’s second verse rings as the most poignant, hinting at class warfare and a coming revolution: “So hard getting by/ The pen’s mightier than the sword, but the sword will settle the score.” 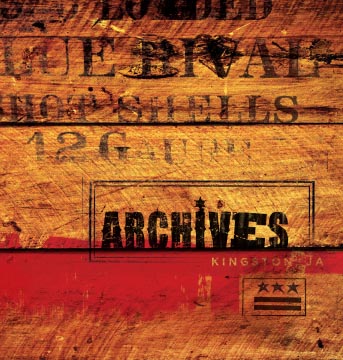 “Crime,” with its ska beat and its message favoring the legalization of ganja, is bound to be a favorite among potheads and libertarians alike. Written and sung by Desi Hyson from The Original Wailers, the lyrics break the argument for legalization down to its simplest premise, asking how planting a flower in your backyard can be made a crime. Here, the chorus carries the message through: “And they tell me it’s a crime, to let the earth give birth to a simple seed/ (It’s a crime) to let the seed take root and not to weed/ (It’s a crime) And for this they want my liberty.” (America’s pot-growing founders like Washington and Jefferson couldn’t have explained it better themselves.)

Ras Puma, whose accusatory vocals reverberate throughout the entire album, sings about reprioritzing values and focusing on what’s important in the song “Much More to Life.” Again, The Archives give listeners another chill rhythm with incitingly insightful lyrics.

Unfortunately, these four songs make up the only ones worth listening to on the 13-track album. The rest is mostly unimaginative and played-out. “Why Can’t We Live Together” is The Archives’ crack at disco — which sounds interesting and fun, but the only problem is that it turns out to be bad disco (and there’s nothing worse than bad disco).

“Boof Baff,” sung by Ichelle Cole, is undoubtedly the worst song on the album, with a beat, lyrics and entire sound that had me thinking I was listening to a parody of reggae instead of serious music. Maybe I missed something, but the song couldn’t have been worse if you had your 8-year-old niece write a song on her Casio. Lucky for the listener, the song is intolerably contagious — like if Rebecca Black was a rastafarian. The rest of the album is good enough to look past the stench of this song, though it’s safe to say The Archives swung and missed hard on this one.

In all, I wouldn’t buy the entire album, but I’ll definitely download the four songs off iTunes. They’re not only reggae — which is a good escape from mainstream, cookie-cutter music today — but they’re good reggae showcasing deep lyrics with artistic content.