June 9th saw the opening of “The Company of Others” presented by OhNo!Doom Gallery in Bucktown. Artists featured through July 5th are Uriel Correa, Joey Potts, Joe Tallarico, Keith Herzik and Cayetano Valenzuela, who is making his Chicago debut.

“My desire in this show was to bring together these different artists that you can tell each one is completely different from one another, but there is always a reference to the figure,” explains Joey Potts, artist and co-curator of OhNo!Doom.

Surrealism, contemporary and psychedelic are some words that came to mind when looking at the pieces exhibited. They’re set up in a way that trickles down from dark, dramatic scenes to those of a more playful and childlike innocence. You may or may not connect with all the works, but one thing is for sure, your attention will be caught.

The colors grab a hold of you and they won’t let go. It was as if the color schemes were the main focus in every piece and the images they produced just formed. For instance, Potts painted the body of the University of Wisconsin’s mascot, Bucky Badger, in a Japenese tattoo style, replacing his head with that of a colorful demon’s and a background filled with clouds of varying shades of grey and blue. The clouds were boldly outlined in a navy tone. What pops out is Bucky’s red and white striped sweater with the letter “W” in the center. It almost burns your eyes when you look at the painting. It holds you captive, but the other colors are so subtle in comparison that the sweater is allowed to pull you in.

Herzik and Tallarico also played with color and its placement. Herzik’s hand drawn collages used color as a highlighter to draw your eye to the intricate detail within and look like they came from an issue of MAD Magazine.

“I just like to look at it, I don’t like to analyze them” says Deanna Tieron of Chicago’s Northwest side, who was admiring Herzik’s detailing. “There’s a lot of art here that I’ve never seen like this before.”

Tallarico’s color placement was playful yet, a bit more systematic. His work reminded me of the figures you’d see in your how to draw cartoon characters book with a Nickelodeon twist, but from the days of Rocco’s Modern Life and Aaahh!!! Real Monsters.

“I see a lot of trendy/pop culture references, which have become icons for the 21st century,” says tattoo artist Jolly, who was among those attending the galleries opening night.

However, the works of Valenzuela and Correa were a bit more on the dramatic side of the spectrum. Valenzuela’s work features all female imagery in snapshot-like poses placing them in rather peculiar settings. It was as if the figures imagined themselves in these odd places and we’re seeing their thoughts. 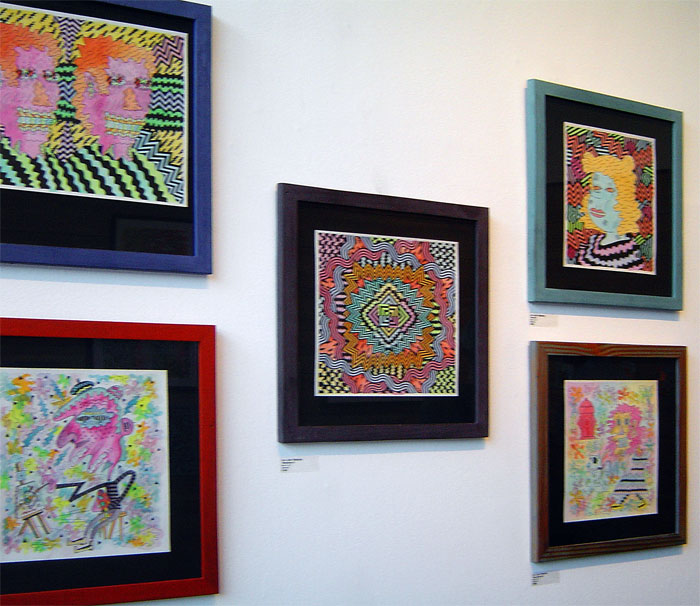 Throughout his collection, Correa uses similar methods of line execution, shapes, skin complexion and dramatics. His many line types create movement in his figures without actually showing off their flexibility. Stars, X’s and heart-like shapes are used to add details and effects to the image. One of his paintings depicts a knife fight: two figures are wrestling in the shape of a square. The person on the bottom is struggling to hold on to the wrist of his opponent, who’s holding this big ass Rambo knife that begs for attention outside the commotion. All his style, the black background and lack of motion absolutely lends itself to the violent nature of the piece.

Although I enjoyed the paintings and the atmosphere, I did not enjoy the area where the paintings were being displayed. It felt a bit squeezed together. It was as if no matter where you stood to look at the paintings you were in someones way or blocking someones view. To get to the back portion of the gallery you had to pass through a tight walkspace, but the back was not as claustrophobic feeling because of the big windows giving the illusion of more open area.

All in all, OhNo!Doom Gallery was a pretty good experience. It is something many can enjoy and appreciate.

“They put on really good shows and I feel the pieces that they put all seem to go really well together,” says Gina Eccher, who is a frequenter of the gallery.

OhNo!Doom Gallery also has a shop portion as well, where you can purchase artwork, screen prints and other goods. “The Company of Others” runs until July 5th. The gallery is located at 1800 W. Milwaukee Ave. They are open on Thursdays and Fridays from 5- 10p.m. and Saturdays from 12- 7p.m. For additional information you can visit them at www.ohnodoom.com. 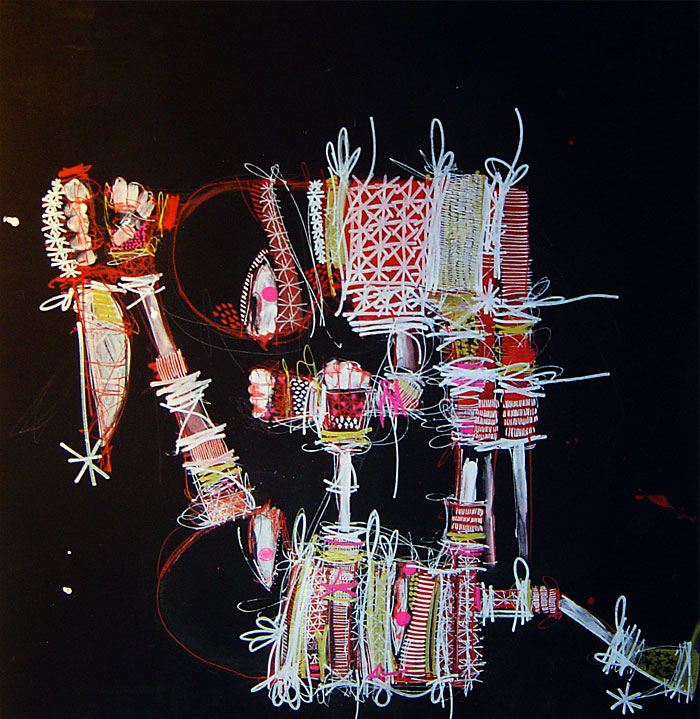