Having recently made his Chicago gallery debut at OhNo!Doom, artist Cayetano Valenzuela has been steadily exhibiting his works in Syracuse for the past ten years and nationally for the last five years. He continues to push himself towards a new sense of artistic being. Although he is a full time artist he does not limit himself to only one aesthetic. Valenzuela lends his time in freelance designing and screen-printing work with clients such as Incubus and Deftones, as well as bands from Boston and local punk bands from Syracuse.

Having always been seen as artistic, he was the type of kid in class who drew on the back of his homework; Cayetano has known no other way of life other than art and offers no signs of wanting to slow down. 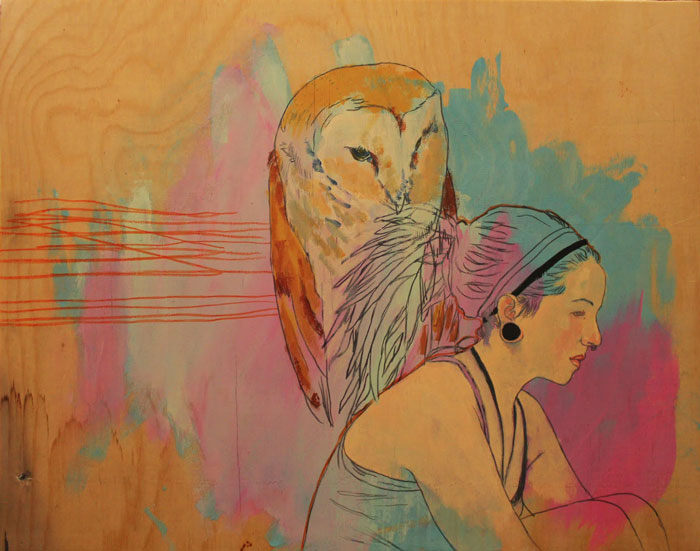 How would you classify your artwork?

I’m not sure at the moment. I guess I sort of put it in the realm of pop surrealism, although I sort of chaff at that term, I guess that’s where it would fall.

Why do you say you chaff at the term pop surrealism?

I don’t think it really describes what I want to do. It’s not quite the right term. It has lots of connotations that that would apply to a whole range of work. Some of the stuff that I don’t think I could categorize my work with would also be considered pop surrealism. It’s a blanket term people use to describe all sorts of art nouveau that’s coming out now.

What colors do you mostly use in your work?

What do the colors mean to you?

I try to evoke a mood or an emotion to correspond with the image. Whenever I think about the color pallet for an image I’m thinking about what emotion I want to come through. That will determine whether or not I’m using a real light pallet or dark pallet with light, lush colors in it.

At what age did you realize you had artistic talent?

I was very young. My mom was a single mom, so she would take all of us kids with her to interviews. To occupy our time she would give us paper and pencil, she always had paper and a pencil in her purse. I would always have something to do and I would always be drawing, so maybe around 4 or 5, if not before that.

What’s been the most beneficial aspect of being an artist for you?

The ability to do what I know I’m meant to do. I’ve always known that that is my skill set to make art, to make paintings and drawings and stuff like that. Just being able to do that and make money at it is the most satisfying thing. Also meeting other artists, like, I recently went down to (New York City) where my buddy was having a show at Last Rights Gallery and I got to meet Billy Norrby and Martin Withrop. These guys are like my heroes and they were super cool with their advice about painting and creating images and stuff like that. To me that is the most beneficial thing, meeting all these great artists that are making it work.

When were you first featured in a gallery?

I’ve been showing since college. There were these little galleries on campus that we showed at and then after that I started showing around in Syracuse. I showed at libraries at first, then I showed at Redhouse Gallery in Syracuse and there’s these artist collective spaces called Deere Factory and it’s an old factory that they have shows in. I showed a lot there.

What was your reaction having your first gallery?

I don’t know. I never really thought about it as something having to really try for because immediately after college I went right into showing and getting my stuff out there. So, there was no gap. The reason being is that I got scared shitless when one of our friends who graduated a year before me came back and he told me how hard it was to keep creating work after college and I really respected him as an artist, but he said he only made one or two small pieces since he had been away. It was just like, fuck… so, I have to work really hard to not have that gap in time and continuously make work. My work ethic is I constantly am making work, probably too much. It was immediate when I got out of college I just started showing (snapping his fingers)… I didn’t stop. For a long time it was local galleries, but then I started branching out.

Yeah, I always get a good reaction. People seem to really dig it. 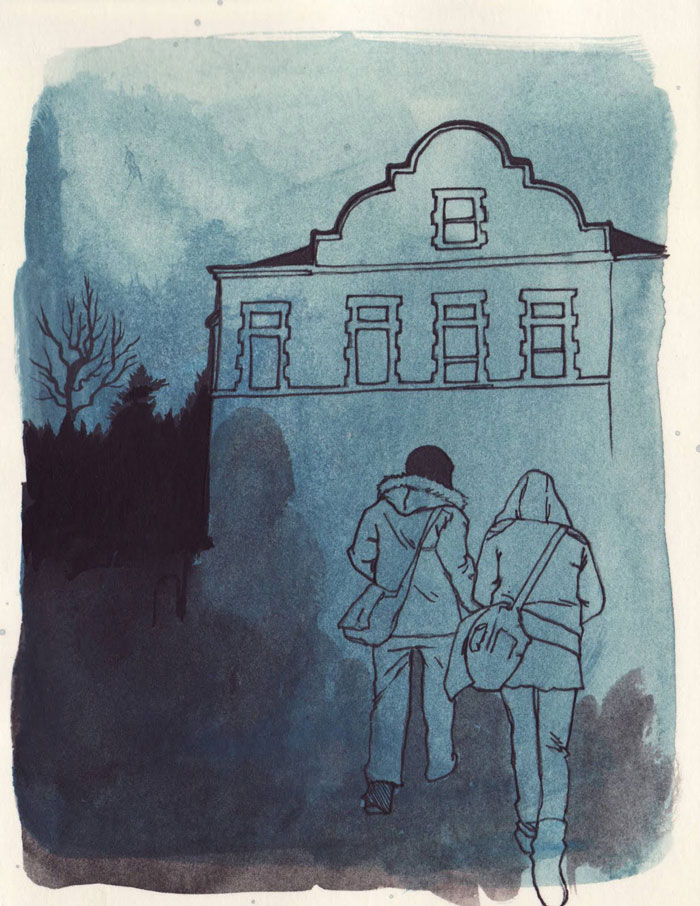 Where else has your work been enxhibited?

I haven’t been outside the country, but I’ve been showing in San Fransisco a lot. I had a couple of shows down there at Modern Ink Gallery. I’ve shown in San Diego at Duncan Gallery. I had a little show in Brooklyn, (Chicago) and a bunch around my town, Syracuse. Also Puerto Rico, there’s this pick up show that is moving around, but it’s in Puerto Rico and Atlanta and I don’t know where it’s going next.

What inspires you to paint?

It always changes. Right now I’m going through a big shift in the way that I work. SO, right now I’m thinking about magic and magical realism. I guess that’s another reason why I chaff at the term, pop surrealism, because I don’t want to necessarily be surrealistic or fantasy. I want something a little different, a little more serious, but that might be the wrong way to describe it. But I’ve been thinking about magic, the history of magic here in America as far as oral story telling traditions and stories that I heard growing up about the devil and Mexican culture. Every story I hear about magic or something spiritual I want to take that and make it beautiful, make it into a piece of art; filter it and reinterpret that idea.

Well, I work with photographic images so I usually have a model sit for me or I’ll use photos I’ve taken traveling around with my wife. We took a bunch of rode trips around that country and gathered images of the American landscape. That’s another thing that really inspires me America, the story and the history of America. I use those photographs and I’ll make a drawing from it and transfer it on to a board or something after I treat it and build it very slowly. I had been learning about classical painting. I’m taking a class right now. This guy, Phil Parsons, whose a painter out in Syracuse and he’s teaching me a lot about how to use that classical technique and bring it into contemporary dialogue with painting.

What Materials do you use?

I use oil mainly, but I started out using a mix of pencil, acrylic and ink washes. Now I’m moving away from that toward straight oil.

My studio space is in the Delavan Center, which is a place in Syracuse. It’s a long studio space that we got a great deal on, big space, huge windows and I share it with my sister who is a book binder, Carrie Valenzuela. Her side is all the binding materials and old print presses; my side is all my paintings, stuff I’ll want and storage in the back.

What kind of art attracts you personally?

Figurative work. I’ve been looking at a lot of people that are making work that is more rendered that does use that classical style, but does something different with it not just boring distributive work, not portraiture, not that. A good example is the artist, Billy Norrby that I met in New York. His stuff is amazing. I’ve been looking at his stuff non-stop. There’s a whole push right now for figurative work and there’s a lot of really cool galleries that are showing and selling that in the city, in San Francisco and in L.A., as well. That’s really the stuff that I’ve been looking at.

What are you currently working on?

I have a show coming up in Syracuse on July 13th. It’s going to be a bunch of new oil paintings and a couple of prints, but mostly new and larger figurative work. Also there’s a show called “Myth” that’s a group show that will be at Modern Ink Gallery and in August there’s another show at Modern Ink that’s called “Dark Art”, it’s art that’s inspired by Heavy Metal album covers. It’s a cool gallery and I’m excited to be involved.

Follow along with all the “awesome shit going on here.” 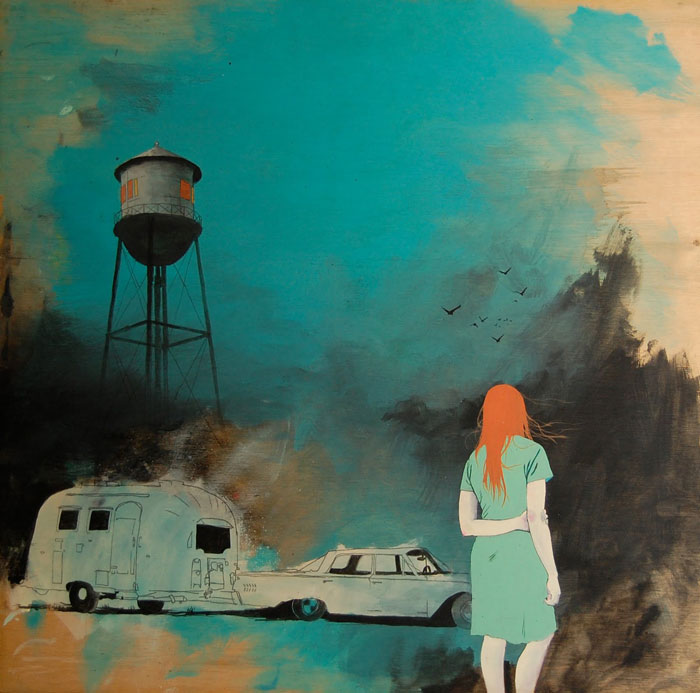