Chants begins with a simple piano melody that resembles the first guitar strums of Simon & Garfunkel’s “Bookends Theme” Noeula’s voice comes in on the octave above; airy, jazzy, and pretty, complementing the piano melodies. This introduction song, “Joke,” is interrupted by some loud major-minor chords that are the motif of the second track “Buckle Down.” This song has its softer moments in the bridges, but mostly it’s accusatory (the chorus almost shouts “You’re a lover, not a fighter. Let me go”). Unlike on this song, Nouela’s vocals are seldom harmonized, but rather are clean and given depth with a chorus effect that either works or is a bit overdone. The drum work is rather simple here and on other tracks, toying with a nice blend of jazz and rock. The third track and first single from the album “Fight” starts off too clappy and toe-tappy, but it quickly turns into something darker and deeper. The minor notes that dominate this song and many other somehow manage to be catchy, especially in the chorus. The fuzzy bass and percussion come to the fore in this song, and Nouela’s vocals are imperfect but wonderfully harmonized with a low octave: both aspects which I wish would have been done more.

The next track “Home” is the ‘happy’ song on the album (every sorrowful album needs one). However, like many happy-sounding songs on largely grave or grim albums, “Home” is just as pensive as the rest. It’s a patient song that makes good use of bells sounds and background vocals without being obnoxious about it.

The album doesn’t take a breath, and goes right into the fifth track “Suckers.” Here Noeula claims she’s a “sucker for sorrow,” swooning and swaying her voice over some odd blend of jazz, folk, and indie that make up Chants. 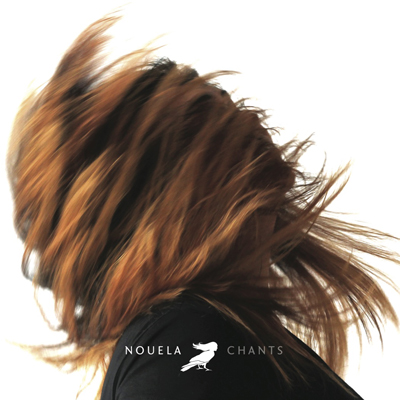 The next song, the title track, is an instrumental reprise of “Joke,” but with a noise and dissonance caked on top. This interlude marks the halfway point of the album, and quickly lapses into what to me was seems like a part II of “Suckers” and was one of the most memorable songs on the album. This song, “Secrets,” though it perhaps might have better focused on bass notes and harmonies instead of mechanical chorus on the vocals, exemplified Noeula’s compositional and musical skills. The jazzy current of the percussion is emphasized and the song is accessible while still having interesting bridges and lyrics. The next song “Joke Part II” repeats “You ain’t no nice guy” over and over again, but its simplicity allows Nouela to demonstrate her vocal capability, which perhaps takes a backseat in other songs in lieu of playing instruments. The ‘chanting’ on the album doesn’t come until nearly the end, on the second to last (and one of my favorite) songs, “Doubts.” The percussion on this track is rather enjoyable, particularly in the break down before the last minute of the song, which nicely prefaces the last and perhaps most obviously sad song, “Regrets.” This song is reminiscent of an old Wilco song, perhaps like the bridge of “Pieholden Suite.”

Nouela was a member of Mon Frere and People Eating People. On this, her first solo album Chants, Nouela was a co-producer and also amazingly plays just about every instrument you hear. Nouela Johnston spent her early childhood in Korea and Seattle where her musical appreciation and talents were nurtured by her music-pro parents. She would take lessons on a number of instruments including guitar, flute, clarinet, saxophone, bass, drums, and especially piano. On the album she demonstrates feeling of a number of genres ranging from jazz and folk, even to bembe and R&B. I hate to make these comparisons because it makes it seem like I’m just making them because all of these are female vocalist-musicians, but I think of Regina Spektor, Fiona Apple, and St. Vincent, for example. This might make the music too ‘derivative’, but no music isn’t and that doesn’t mean it’s not thoroughly enjoyable. The album is very soulful and complex, yet seemingly effortless. Each track complements the next, creating not just a wonderful collection of songs, but also a unified album that is as thematically complex as it is aesthetically pleasurable. Nouela’s songs are genuine tales of vulnerability, realization, and facing love and sorrow.

Chants is now out on the Control Group label. Here’s the first single, “Fight”, just in case you’re a video-nerd.