—Linda Hirshman, from an interview about her new book,“Victory: The Triumphant Gay Revolution”

I don’t like parades. This makes a lot of sense given I’m a creature of the rural Upper Midwest, the bastion of Puritanism (which H.L. Mencken defined as, “The haunting fear that someone, somewhere, may be happy”). I’m from the Lake Wobegon Garrison Keillor speaks of when he says, “You can always tell when a Midwesterner gets angry, because the more angry they get, the nicer they get.” I’m from a place where you just don’t talk about accomplishments. At least not too much for fear of sounding like you’re bragging. Can you imagine what the parades are like when folks like these throw down? There’s much more to my people than the Fargo accent. And it doesn’t really matter what type of blood pulses through your veins. The culture here is thick and permeates down to the marrow.

This year was my first Pride parade. Not only that, but thanks to Alderman Solis, the Gozamos crew were able to ride and march along his float. I marched! I marched in the freakin’ 2012 Chicago Pride Parade!

My exclamation is neither gratuitous nor histrionic. I marched inside a corridor flanked by almost a million glittery, shiny, beautiful people brandishing free hugs! Hour after hour, I hooted and hollered and beckoned people to do the same. In return, I threw beads at them or hand delivered Gozamos stickers.

There’s a method to all this handing out or throwing. At first, like new lovers, we were too eager. We put out an incredible amount of flair and one in our party was even mobbed. I didn’t know what to do! Death by bead horders? With almost a million people, it’s a real possibility, at least as far as the subconscious is concerned. 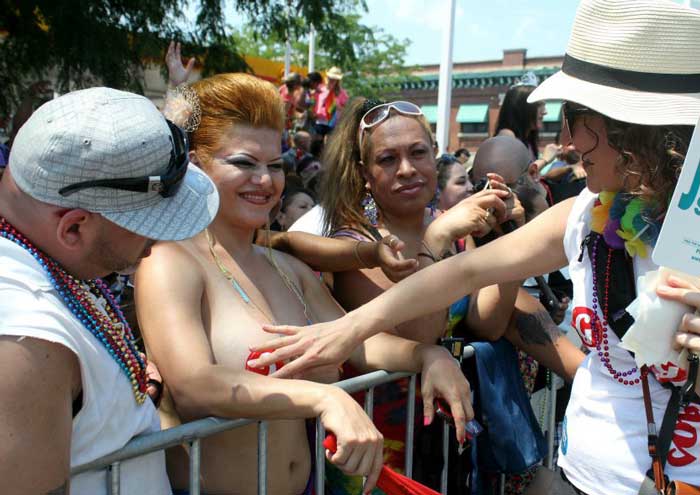 Our methods eventually evolved and organized themselves neatly into strategy. Because we had so far to go, we grew selective. And in particular, this was the case for neckwear. Fortunately, we had many stickers. Even better, we could actually stick the stickers on folks. Then I started to target those who didn’t have any flair or who were a little on the quiet side. Because after all, there’s nothing like a sticker with a big “G” on it to put a smile on your face, right? See. This is the strange logic that pipes in from the feather boa’ed ambient. Even better, it literally worked! Pride parade euphoria cannot be underestimated.

These interludes of giving interrupted the constant adjusting and managing of the stimulus. The triage your brain gently goes through after the shock and bargaining of the 850,000-people stimulus is an emotional affair, to be certain. Just as emotional was the event itself.

In a recent NYT’s Books interview podcast, author of “Victory: The Triumphant Gay Revolution,” Linda Hirshman, spoke to the lovely and brilliant Sam Tanenhaus about Stonewall and in particular, details I missed or misunderstood all these years. For instance, I thought that it was Stonewall, in particular, that was so crucial to gay rights. No! I was wrong! And forgive me if I sound preachy, but more people need to know this; it cannot be uttered enough. Stonewall was pivotal, says Hirshman, because of the parade that happened a year later. Even more to the point, it wasn’t just the swell of the march in New York, but the corresponding march and truly, parade, that happened all the way across the country in Los Angeles that was pivotal. This made it a coast-to-coast national event. “There had been violent episodes in the 60’s in California, any one of which could have become Stonewall,” explains Hirshman. “And one of the reasons why we’re going to celebrate this Sunday, one of the reasons why Stonewall turned out to be the metaphor for the gay revolution is that a very smart bunch of people figured out that after Stonewall, they would hold a parade commemorating Stonewall a year later.”

I listened to this podcast before Sunday, so I was already a churn of emotions, for it changed how I perceived parades. Never before had I thought of a parade in this way. Parade season in Belfast often ends in violence. Parades in my homeland would end with a suntan and possibly a picnic, and admittedly, I’m being hyperbolic; not all parades where I’m from are so vanilla. But a Pride parade? If there’s sincerity in the air, if there’s costuming and extravagance and voices run hoarse and squeaky, it’s because if there were no Pride parades, there’d be great misery and torment. In this way, they – WE – parade because we have to.

In another interview I listened to recently, the subject of heroes came up. Asked if John Brown was an American hero, Princeton historian Sean Wilentz answered, “No…. He was fearless, he was dedicated, but Brown speaks to our despair. He doesn’t speak to our hope. He speaks to us in times when the possibilities for political change, political improvement, seem to be shut down. So he speaks to pessimism. He speaks to the idea that we have to rise up in arms against the United States Constitution. We can’t solve our problems any other way.”

There’s something so lovely, holy, even, about a parade such as the Pride parade as a political protest, as a gesture of hope that’s wholly American. I saw much more fuchsia and sparkles than I did red, white and blue stars and stripes, save for a couple star pasties, last weekend. And yet this was the most patriotic event I’ve ever attended. Ever. It was the collective coming out party for the voiceless and oppressed represented at what is now totem — Stonewall — all those years ago. And this is why we now party, why we dance, why we march and why we parade. In remembering in this way, out loud, we are a better country, a better people, a more fabulous people.