Stanley Tigerman sounds like Robert Loggia or Lawrence Tierney’s “Joe Cabot,” the mastermind boss in Reservoir Dogs—like a metal shovel dragged along a cement floor. Such quality infused a strange menace in the subject matter—architecture and the ineffable—during the lecture Tigerman gave on an exhibit of his work, Ceci n‘est pas une reverie (This is not a dream): The Architecture of Stanley Tigerman. This voice of his also made for an accidental grace of theatrics when the topics of death and even the Holocaust came up. It was as right as James Earl Jones as Darth Vader’s voice.

But watershed in Tigerman’s work are humor, love and the cerebral. These took on a very sweet rendering when from the rasp emerged a story about his wife and business partner, Margaret McCurry, hating the profession of architecture. “Margaret is the penultimate amateur, the word, ‘ama,’ the prefix ‘ama’ means ‘to do it for love.’ And so we do,” Tigerman explains. And so, it is both beast and beauty that make up their firm of Tigerman McCurry. 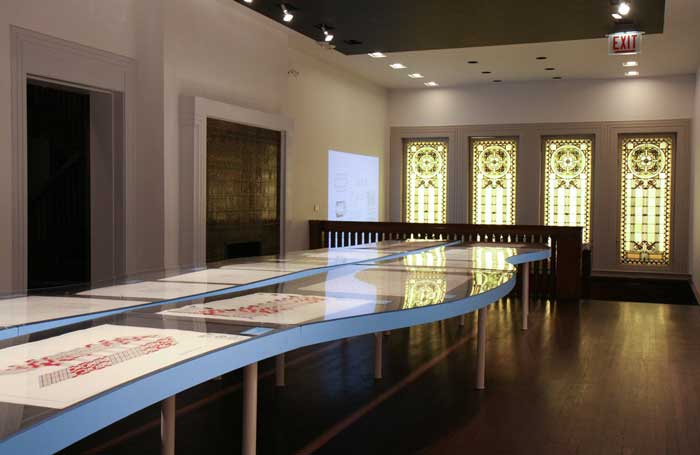 This is the hope, isn’t it? Namely, that an architect, and any professional, for that matter, is motivated by virtuous love and equipped with the intelligence and savvy needed to keep that noble motive as alive and prominent as blood in veins. If you love what you do, the saying goes, you’ll never work a day in your life. In many ways, then, this exhibit is the spoils of such love. And because of that, it might as well be considered nothing short of sacred.

Take, for instance, an amazing, very old story Tigerman told about a boy raised by a deer (Ibn Tufayl’s Hayy ibn Yaqdhan). Eventually, the deer dies. The boy, in his attempt to make sense of what happened, dissects her to locate her love for him. Of course, he finds nothing. Like thoughts in a head, love cannot be pinpointed to one specific place. Like thoughts in a head, love is everywhere and nowhere, all at once. It is this evasive quality of love that Tigerman is exquisitely mindful of when, like the boy with the deer, he deconstructs the dissection and makes a building of it.

One thinks of emergence theory when hearing Tigerman speak of architecture in this way. It is this quality of headiness or complexity that deems clouds so appropriate to the exhibit. Of marquee importance, white clouds (there are nine) punch out the gallery space, and each cloud features a theme with head-spinning details. Filling out the rest of the thought-seeded clouds are rooms full of drawings of the works of Tigerman’s that illustrate what these strange heavens proclaim. In one room, there is a cloud entitled “(Dis)Order.” Amid the explanation is stated:

“Tigerman avails himself of multiple grid systems that dislocate the sense of stability, orientation and hierarchy, and that suggest the existence of another non-linear order in architecture. In many of his projects, grids read like scaffolds, alluding to the impermanence and vulnerability of all things and ideas; they help define architecture as the perpetual ‘attempt to heal an irreparable wound.’”

Tigerman says he’s motivated by love, but holy cow. To see your work as an architect as an “attempt to heal an irreparable wound” is a lot to take on. And to announce to the world such motivation also attracts notice and pause. A particularly tough reviewer who lambasted Tigerman for being more of a satirist than an architect and judged some of his work as unsuccessful because it commits the sin of lacking  followers, failed to address this part. Another reviewer has a slightly different take on the show with a well-argued claim that Tigerman is more of a commentator, his work resembling the work of others but with a twist.

There’s the saying, People who can’t do, teach. Inherent in this adage is that teachers are less talented or have worked less than others who’ve developed skills or however you think of it. The heart of this, however, is that teachers are devalued. It’s a pejorative saying. In reality—and I think this is obvious but needs to be said aloud much more often—teachers are, themselves, sacred. They are the high priests of the chapel of knowledge. They are the greatest hope for the future. And some folks are so pulled by this call to share what they know, they sacrifice in order to teach. This is a reality that is beyond the brevity of wit.

For Tigerman, he’s made a living out doing both. This sort of creature—the doer/teacher—creates works that pulse with complexity, works that buckle from the weight of things like “attempting to heal an irreparable wound,” works that, for lack of a better word, twist. Unfortunately, for folks like me and too many, really, without the aid of a lecture beforehand and much reading and thinking, this wonderful twist gets misunderstood, dismissed, insulted.

Take, for instance, the works of Tigerman’s in which he creates a place of inaccessibility, of (Dis)order. The Fukuoka building has within its center, a hole. The Holocaust Memorial Museum has a place where “two spaces…are evacuated” evoking a literal displacement. His “Little House in the Clouds Model” is cleaved down the middle. These places of absence Tigerman creates are all rife for commentary. One thinks, for instance, on the bifurcated thinking of duality—black and white, right and wrong, yes or no, male or female—that’s so much about Western culture and how that counters Eastern thought. We can take this even further by including Tigerman’s Jewish heritage as yet another reason why he lives in the complexity. For Tigerman and the Jewish priests alike, it is the holes in the narrative that are holy, worthy of suspicion, of rumination. It took Abraham three days journey to bring Isaac to Mount Moriah. The author of Genesis didn’t mention anything about those three days, except that Abraham woke up early that morning and that the journey to kill his only son took three days. Why the omission? For the priests, they wrote Midrash on this text to answer that question. For Tigerman, he builds a room, a house, a memorial in his search for what remains beyond the words, the ineffable.

At the end of the lecture, I asked Tigerman if he could comment on a Vanity Fair article, “So You Say You Want a Devolution?” by Kurt Anderson in which Anderson argues that the last decade has experienced a lack of innovation in style—from fashion to architecture to music and so on—and instead is recycling the 90s, the 80s and even further back for two reasons. One reason is that there is too much change happening on a technological level, and the artists have gone quiet. The other reason is that too much change is too expensive.

Tigerman’s response to my question: “Nothing changes.” And then he told me to read a book by Stephen Greenblatt called The Swerve: How the World Became Modern.

I politely noted the book title and sat down. As soon as my butt hit the seat, an older woman sitting next to me hissed under her breath, “He didn’t answer your question.” I quickly met her gaze, she winked and we both smiled.

Tigerman’s work will show at the Graham Foundation’s Madlener House until May 19th.