With the release of Bigg Jus’ fifth solo album, Machines That Make Civilization Fun, the New York icon is reminding fans why he just might be the most diabolical genius in the lyricist game. The album’s hard-hitting beats laced with Jus’ ju-jitsu-style wordplay amount to nothing less than hip hop’s version of “Shock and Awe.”

Admittedly, this critic was forced to look up the lyrics to each track, which is something every Jus listener should do. To do otherwise would be to miss Jus’ tutorial on… well, just about everything. Each verse is infused with references to biochemistry, foreign affairs, astrophysics, technology, secret histories and corporate culture.

Jus throws every rule about hip-hop music out the window. The instrumentals capture his state of mind, and his lyrics blast through the speakers as if from a bolt-action rifle. Jus aims to cause chaos for the eardrum.

The best song on the album is “Black Roses,” in which Jus introduces himself in the very first line as “the atom-splitting novelist.” In just this single song, Jus displays his deft lyrical hand by managing to sprinkle references to the Marquis de Sade, the Large Hadron Collider and the Higgs boson, Big Brother, and the Freemasons. No one doubts Jus when he promises that he has “50 ways to Gaddafi ‘em,” describing his music as “Fukushima rap.” 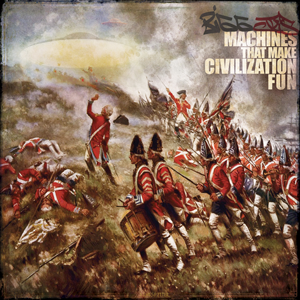 On other tracks he takes on corporate greed — which Jus calls the “American Nazi prima facie corporate parasite” — and American foreign policy. The song “Empire Is A B—-” starts with the lines “Chicago school of economics/ Bernard Lewis”; which other MC do you know starts his first verse with that? He says that the U.S. defense budget hints toward politicians with small manhoods, and calls world peace “a European’s kryptonite.”

Jus labels his title track “the mayday song,” in which he takes on U.S. foreign policy again but also touches on the 9/11 conspiracy. The song “Samson Op-Ed” is a severe criticism of the Israeli government, which he calls the “xenophobe overseers of an apartheid state.”

Throughout the album you can imagine Jus freestyling on some future battlefield where human resistance fighters are at war with conquering cyborgs. (In fact, if the machines ever do rise up against us, Jus’ album will make for a great soundtrack.) Each composition is Joycean stream-of-consciousness, Orwellian subversiveness and Nabokovian intricacy rolled into one and transplanted into the 21st century.

He states his purpose clearly on the album: “I ain’t no idle threat.” And take it from me, Jus is not messing around on Machines That Make Civilization Fun.

This is rebel nerd music. Play at your own risk.