“Why do you carry only one type of chocolate?”
“Well, it’s the only kind with all of its polarities intact.”
—Barbara Fleming, owner of Pure Reign

The first time I walked into Pure Reign, I felt like I had walked into someone’s house, uninvited. The shop’s main entrance hides on the side of a building, lacking all the flourish and come-hither flair typical of most businesses. Frank Lloyd Wright’s Home and Studio comes to mind as he purposely obfuscated the front doors in an effort to frustrate the lazy or easily beguiled; if they didn’t struggle a little to find the way in, Wright thought, they weren’t worthy of entering anyway.

The lights were on full dim. Two beds, occupied, took their places in the not-quite-dark-enough crannies meant for inviting the askance glance of shoppers. A Big Green Egg grill, perched and ominous, loitered silent against a shadowed wall, along with candles, aromatics and a bevy of supplements and contraptions meant for plugging into outlets. I almost about-faced in retreat, but I needed a difficult-to-find chocolate—Kallari (kai-YAH-ri)—they carried.

Barbara Fleming, shop owner and expert in all her wares, was working that day and informed me that the chocolate bars wouldn’t be in for a couple of days. I told her that wouldn’t be a problem. She was quick to pipe up that this chocolate had never been fumigated. I nodded as I was already aware although completely uneducated about what that exactly meant—for instance, how all shipped cacao beans are fumigated as a part of their journey to Europe, the US and wherever else they’re processed into chocolate. This one small fact really changes the bid for superiority: “from bean to bar” to “from fumigated bean to bar.” The idea of chemical residues is quite shocking, especially when no other websites (other than Kallari) I’ve found address such a creepy, entirely widespread practice. It’s like the dirty secret no one talks about.

Two days later when I returned, I asked Fleming why this chocolate was the only one she carried. Her answer left me stunned:

“Well, it’s the only kind with all of its polarities intact.” 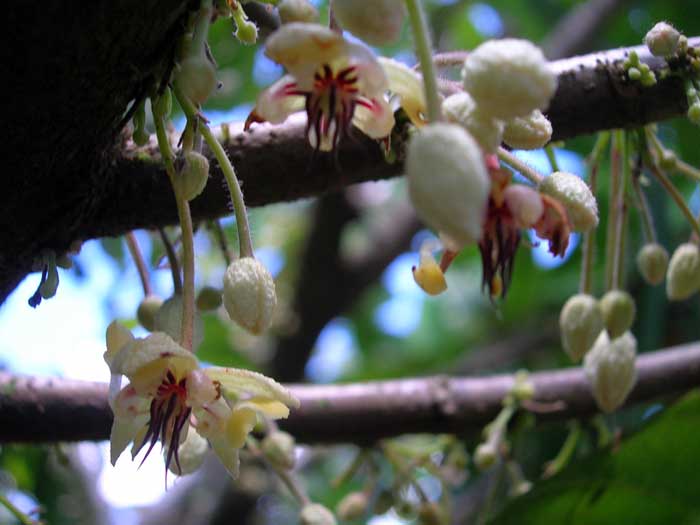 Intact polarities—It’s a claim to fame I still find mysterious. So, too, is the idea of a centrifuge as a kitchen appliance, but this is the age of molecular gastronomy and Nathan Myhrvold’s groundbreaking “Modernist Cuisine,” a cookbook that weighs 46 pounds and is being heralded as groundbreaking as Escoffier’s “Le guide culinaire” way back in 1903. And back then, “groundbreaking” meant things like serving your food hot and using menus. 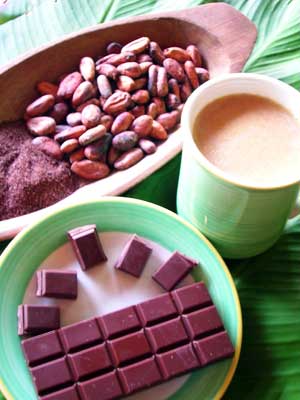 Centrifuges and polarities aside, the more you learn about Kallari, the more you realize how freakin’ amazing it is. There’s just no other way to say it. For instance, their website is without all the marketing regalia sexing up almost all other sites (Lindt, Godiva, Ghirardelli, Nestle, Hershey’s, Fannie May, Russell Stover, to name a few). While this might seem like an oversight on their part or the result of poor web design, it’s actually something closer to what Socrates was so annoyed about when it came to the sophists; a physician can make you healthy, and a beautician can give you the appearance of health. In this way, the fancier chocolate producers give the appearance of the best chocolate and while it may taste a little like heaven and be worthy of all sorts of moaning and rocking back forth and whatever it is that folks do when feasting on chocolate yumminess, the chocolate is substandard in ways that matter.

A “Region and Issues” category highlights strip mining and oil exploration in Ecuador and what the Kallari Association is doing about it. Again, while other chocolate producers mention Fairtrade practices or small generosities like letting the farmers taste the chocolate from the cacao they grow, Kallari goes way beyond the benchmark. This is because other producers are not the farmers. They are not the people who have lived in those jungles for what might as well be referred to as simply forever. And if they’re fighting this fight one candy bar at a time, chocolate-as-weaponry has never looked as technical.

Reading the tech sheet on Kallari cacao production is like reading an instruction manual or text book and finding it arousing in ways that count—ethically, cerebrally and let’s just say it, even sexually. Just like with wine, cacao beans come in different types of beans or varietals. Kallari lists their varietals including Cacao Nacional and what they call “noble cacao cultivars” of Criollo, Trinitario, Venezuelan, Amelonado and Blond. They include mention of other unnamed types as well. During their screening process, they toss out beans showing genetic deformity but because research on the gene pool of cacao, unlike wine, is nascent, and genetic drift of a hybrid varietal—CCN-51—could occur, hard and fast statements pertaining to varietals or heirloom status are made with care. CCN-51 is heavily used because it of its production value as well as its heartiness. Unfortunately, it depletes the soil and doesn’t deliver in flavor. This is one of the reasons why, in 2004, Slow Food International awarded Kallari with what is called “the Presidium distinction” for not only using Cacao Nacional but for what is, in effect, sparing this amazing varietal from annihilation. Apparently, only two other varietals have been recognized in such a way.

In addition to all this, Judy Logback, a central figure in the story of Kallari, pointed out to me that laws dictate that only 10% of a varietal need be represented in a chocolate bar to be labeled as such. Kallari uses 100% of the varietals indicated. One hundred percent! The more I learn about the chocolate industry through researching Kallari, the more I’m shocked. 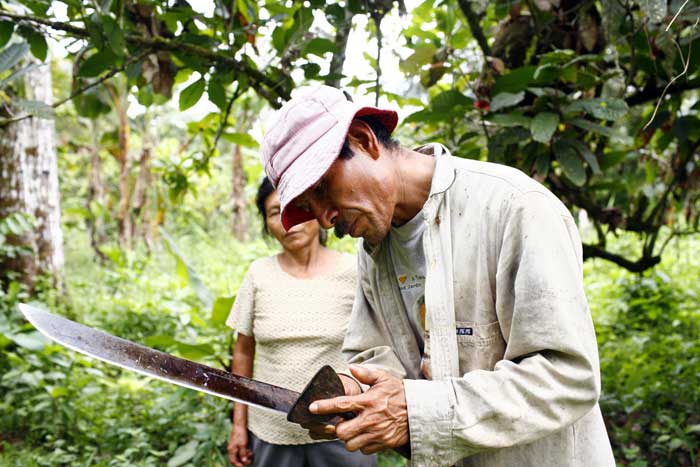 All of this is mere name dropping, unfortunately, unless the significance can be translated into flavors. Right now, Kallari carries three different types of cacao concentrations: 70%, 75% and 85%. Over 900 member farms contribute to harvest. They pool all their beans, with the best beans reserved for the Kallari chocolate bars. All others are sold off to other producers. In addition to eliminating any middle men or brokers, Kallari is flourishing with this economic model.

Highlighting all the details of Kallari chocolate production is a delight to read, especially when reading about small graces like how they use only Laurel wood in the tools used during cultivation and harvest because it has no alkaloid compounds that might compromise flavors in more sensitive varietals. Another detail worth mentioning: the beans are roasted 5-10 minutes shorter than standard practice. This ensures, again, that the more delicate flavors are not roasted away. One of my favorite NPR programs, On Point with Tom Ashbrook, recently covered a new trend in coffee roasting in which beans are now lightly roasted for the same reasons. In this way, Starbucks is now offering a Blond roast. What’s very cool is that Kallari, like Intelligentsia, Metropolis and Ipsento, have been doing this for years. 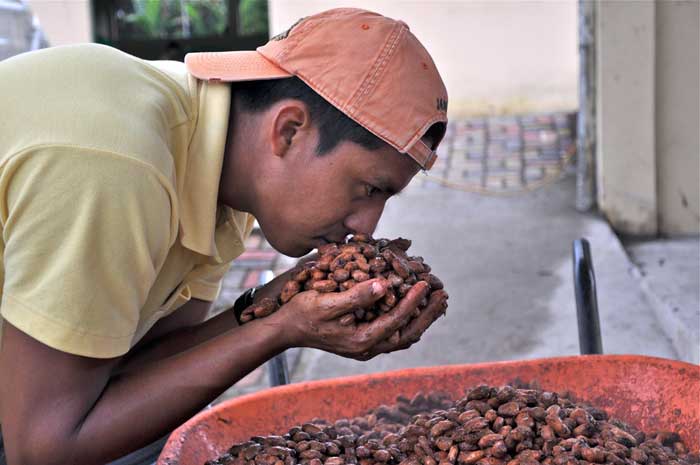 One of the most alluring descriptions of flavor when it comes to the flagship varietal of Kallari chocolate—Cacao Nacional—has to do with floral notes, mostly described as jasmine. It took me a very long time to be able to differentiate between varietals in wine or to smell things like graphite and barnyard and herbs. Unfortunately, my palette is not as good with chocolate. Even the idea that I can taste naturally occurring floral notes in chocolate makes my head explode. It’s such a lovely idea. And so, over the months I’ve methodically sampled these three cacao concentrations while reading the thoughtful reviews others have posted online.

In “When Chocolate Is a Way of Life,”  The New York Times quotes Tomas Kerne, a Swiss chocolate expert who consults for Kallari, that the bars ‘have a certain smell and taste that is herbal, flowery but also savory, like black pepper….the same taste I find in a Californian cabernet.’” Judy Logback describes the 70% as a gateway chocolate designed for milk chocolate people like me who “want the health benefits of dark chocolate and less over-powering sweetness…[with] a touch of extra cacao butter, like a traditional Belgian chocolate recipe.” She goes on to describe the 75% as the bar for the dark chocolate connoisseurs and the 85% being surprisingly mild, low in sugar, highest in concentration. She goes on to mention a new line called—Sacha—which will appear on shelves in the fall of 2012. These shelves, while not in Whole Foods in Illinois, are in Whole Foods locations in other states. Besides Pure Reign in Oak Park, Dill Pickle Food Coop, New Leaf Natural Grocery, Maya Essence in North Center, Ten Thousand Villages in Evanston and several other small retail stores in the Chicago metropolitan area carry Kallari.

I first discovered Kallari one evening, late in October, when a man named Edison Mamallacta spoke at a Chicago Fair Trade event called Globalfest Latin America held at the National Museum of Mexican Art. Because it was a Fair Trade event, he spoke at length (he’s the marketing director for Kallari) about how the Kitchwa people of Ecuador who make Kallari Chocolate benefit from the Fair Trade movement. Ironically, Kallari bars don’t bear the Fair Trade Federation seal because this would mean paying $.08 per pound of their cacao for the Kallari farmers. This also means that the Fair Trade Federation are genuine and true and are not bound by technicalities but by the courage of their convictions. It’s yet one more beautiful part of the story of Kallari.

One thought on “Kallari: The Best Chocolate in the World”