Today, over 150 residents, activists, elected officials, and neighborhood merchants attended the Humboldt Park Community and Business Press Conference to show their indignation over the defamatory remarks made by the owner of Tipsy Cake about the community. The environment and theme of the press conference was overwhelmingly positive with attendees holding Puerto Rican flags and signs like “I Love Humboldt Park.” The gathering also stressed the plethora of social, political, and economic capital that exist in Humboldt Park. This was made apparent by numerous calls by the speakers to continue to support the economic and cultural corridor of Paseo Boricua (Division Street). In essence, today the true spirit of the community was unveiled to the city. There is plenty that is going on in Humboldt Park and this was an opportunity to remind people of such a fact.

We are gathered here today to demand a public apology to the community from the owner of Tipsy Cake, Naomi Levine, and the changing of the name of the pastry “Humboldt Crack” and to stop selling products that are defamatory, racist, and negative. 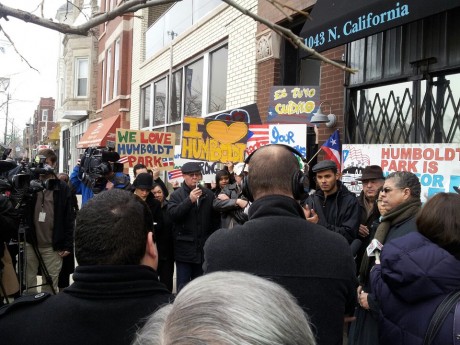 I am a Puerto Rican woman who lives in Humboldt Park, within one block from Tipsy Cake. I have lived in Humboldt Park all of my life choosing to also raise my child here, and my perception, like most residents, of this community is completely the opposite of that of Naomi Levine. How does someone open a business in a community without an interest in learning about it? Clearly, there are lessons to be learned. This business and owner reflect the common occurrence of people coming to this community knowing nothing about its history, people and culture and not wanting to learn about it either. This also serves as an example of how gentrification, which we are consciously struggling against, unfolds within a community.

But we know that Humboldt Park and Paseo Boricua can boasts about its triumphs and accomplishments. These include: The naming earlier this month of the Institute of Puerto Rican Arts and Culture as a “Museum in the Park,” at par with the Field Museum, the Art Institute and the DuSable Museum. The 40th anniversary of Dr. Pedro Albizu Campos High School serving generations of young people, which houses one in four rooftop greenhouses in the city and the only hydroponically-based one.Vida/SIDA which offers free STI testing and counseling and is set to open the first LGBTQ youth homeless shelter in Humboldt Park. And one of the largest and most beautiful parks in the city with the most active baseball leagues, which also has a mini Wrigley Field and a state-of-the-art soccer field.

We have a plethora of youth spaces and programs such as the Batey Urbano, the Boys and Girls Club, BUILD, Youth Service Project, and many, many more.

We have some of the best attended annual celebrations in any community in Chicago including: Haunted Paseo Boricua during Halloween, Fiesta Boricua ,which attracts over 200,000 people; the Puerto Rican Peoples Parade and Festival,Three Kings Parade, and the Paseo Boricua Parranda. All this takes place every year with no or little violence especially in comparison to other festivities in Chicago.

We have also built two of the most beautiful buildings one can see in any community in this country. Teresa Roldán Paseo Boricua Apartments and La Estancia, which are both aesthetically pleasing and reflect the rich heritage of the Humboldt Park community residents.

Humboldt Park and Paseo Boricua, throughout its long and rich history, has always taken the immense responsibility to confront every and all issues that effect this community. Humboldt Park and Paseo Boricua truly embodies an actualized community with dignity and determination. This goes to show that we build organic and viable alternatives that do not result in the criminalization or displacement of community residents and businesses.

The comments posited by Naomi Levine are based on a false premise of Humboldt Park. She represents one of the symptoms of gentrification. In response, this community has risen to momentous occasion to defend our name and all that we have created. We must continue to enact a daily vigilance to continue to construct a vibrant and sustainable community that we all know is the TRUE spirit of Humboldt Park and Paseo Boricua.