There is something about the way this self-proclaimed “Chicago-born Mexican” talks that captivates. It could be his extensive knowledge of Latino Arts or his articulate way with words. Cesáreo Moreno, Chief Curator at the National Museum of Mexican Art, has been part of the museum since 1995. Since 2004, when he was selected the first full-time curator, he has curated Dia de Muertos and many other exhibits with a focus on turning them into informative and entertaining experiences for the visitors, and for him as well.

The annual Dia de Muertos exhibit has been an important part of his work and personal life for many years. With the Silver Anniversary coming to an end, Cesáreo sat with us and reflected on what the exhibit has been, is and will be in the years to come. He shared many of his personal life experiences with the exhibit, and demonstrated why the exhibit is such an integral part of the Chicago cultural calendar every year.

Gozamos: This exhibit has been very successful for the past 25 years. Could you give us a brief historical tour?
Cesareo: When we opened the exhibit 25 years ago, Hector Duarte, who is one of Chicago’s best known muralists, had just arrived in Chicago from Michoacán and he was selected to do a very small exhibit about Dia de Muertos. In the process of putting together the artwork his father died back in Mexico so he had to leave, and he only completed half of the exhibit. The other half was taken up by Clay Morrison, a Chicago artist who was very familiar with Dia de Muertos. So now, 25 years later, what I love about this exhibit is that we are including Hector Duarte again…It’s beautiful because he was saying that this exhibit always makes him think of his father…he always thought how ironic that he was working on Day of the Dead when his father died. He is in a very different place in his life now…but yet he still makes that connection of this exhibit with his father…and what I am trying to say is that many people, not just Hector, really do have a personal connection with the exhibition…many people who continue to come year after year are people who have participated in past years doing ofrendas for their loved ones…and so I think that personal trayectory continues…

If we were to make sort of a year book of all of the arte popular, of all of the Day of the Dead exhibits, I think there are so many stories that are woven in…somebody is here as an artist doing a piece and then eventually there is an ofrenda to that person…so you can see it as something very sad or as a natural cycle of what Dia de los Muertos really is.

As far as ofrendas go…there have been some contemporary ones that have really shouted loudly for change…social justice…a few years ago a school group did an installation that was about all the CPS students who have been killed that year by violence. And so here is this high school that made this installation dedicated to their peers in the city and they put a desk for every person…and it was sort of a classroom. It was one of the most moving installations…I think that installation along with many others throughout the years has had an impact in that they make people aware of something that is wrong in our society.

The last thing I would say about Dia de Muertos over the years is just all the people that I’ve had the privilege of meeting. Dia de los Muertos has opened the door in my life to so many different people who have incredible talents and have something to express in their loss…I think that in grieving, in realizing one’s own mortality and in letting go of something, there is great potential for expression…and a lot of people have stood up to that and really created pieces that were so powerful in that they made you feel and think.

In your role as a curator, you have seen many artists’ successful stories unfold along the galleries of this museum. Would you share some success stories from artists that “began” at this museum?
The museum offers a great opportunity for many artists to exhibit their work. For some artists is a small stepping stone…for others artists is a major accomplishment. I would have to say that we have helped out artists in both ways. Of the Chicago artists and younger generation, one of the artists that I think has acknowledged how the museum has sort of assisted her in her career would be Elsa Muñoz, who right now has works of art at both Claro y Obscuro and Dia de Muertos XXV exhibitions. The first time she ever exhibited in a museum was here for Day of the Dead back in the early 2000s. She was still in school and she and two other friends of hers created an illustration-installation. When you see the work that they did, it was very well done…it was beyond student work. But at the same time you could tell they were talented individuals who were just about to start to blossom. Now when you look at Elsa’s work at the exhibit you can see that she is well on her way to becoming a very successful artist. So maybe Elsa is one…but like I said, we give them the opportunity. I don’t ever want to say that the museum has launched someone into stardom, that takes dedication and talent and we are a step along the way.

What are you more comfortable working with when curating an exhibit?
Installation over all. Installation has the strength to say and captivate people in a way that a painting or a sculpture cannot. I think installation work now reflects a little bit more of the society. Whether multiculturalism or multimedia, today’s society has a different way of understanding visuals and I think that installations really can keep your attention and mimic reality in a different way than a painting could. I still love to look at beautiful paintings, but they are so passive sometimes…it is between you and the piece. Whereas an installation sometimes incorporates little bits of everyday life. A good installation that is well thought out, well planned and has a lot of meaning, is something that is fun for us as museum people to help install. Hanging the paintings, photographs…there seems to be less creativity involved on our part because the creativity has already taken place in the artist’s studio. When it’s an installation, the creativity continues to happen in the gallery. And you can take that piece to another space and it will be a little different. As a museum person, that is a little bit of the fun that we get to participate in when an artist does an installation.

Now as an art lover and consumer outside of the museum, what do you look forward to most in Latino Arts?
I guess I’m more curious to see how the fourth dimension will become a part of the artwork: the aspect of time. There are many artists who are dealing now with aspects of time in their own way: “time arts.” I’m looking forward to the day when time will not be a media, but a component of more pieces. Whether it has motion or whether the pieces change over time…which, as a museum person, always causes us more problems. People in the museum world, maybe not so much in the contemporary museum world, oftentimes struggle with pieces that are not painting, photography and sculpture…but those ways in which the artists are changing: what does artwork mean? What is considered art versus what is not considered art? I think that those artists who are changing those definitions are changing and challenging the museums and the people who collect them. Much like Juan Angel Chavez’s piece, Neptuno, which is one of our first major installations that is about experiencing, participating, walking through it, touching it and transforming that piece as much as it transforms you. I look forward to more pieces like that. That is really what makes this institution or our role, that is what really keeps us engaged. How is the next group of artists going to challenge my perception of what art is and the way we handle it? How do we take this installation and make it accessible to a blind person or someone in a wheelchair? How do we take the arts and really make it a relevant experience for people? So that they realize that it is not only in the museums but it’s really everywhere. And don’t get me wrong, it will cause much debate…Those are the kinds of arguments that I think keep us, as museum professionals, on our toes, fresh and up-to-date. 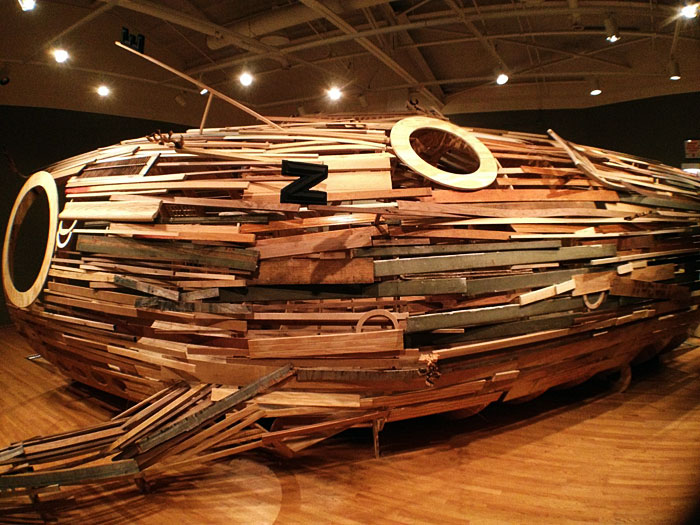 What would you say to our Gozamos readers to entice them to come to the museum before Dia de Muertos XXV closes?
I would say that Chicago is such a beautiful city of neighborhoods. I think that this museum is one of the best examples of the way a neighborhood can really celebrate a lot of what it has to offer and really help transform what Chicago means. We have a little bit of everything, and I think that it all works well together. It’s a good recipe…ingredients that you might not normally think of going together but yet it works. And I would invite everyone just to come out to the museum, see a sampling of what we have and then go out into the neighborhood and continue that whole experience of different ingredients held together over time and just creating something that is unique and fun.

The National Museum of Mexican Art is located at 1852 W 19th St, Chicago. For more information about this exhibit or the NMMA visit: www.nationalmuseumofmexicanart.org.