Just in time for your Thanksgiving meals and Christmas spirits. Here’s a little treat from one of my new favorites, A. Huizenga. Lets just say her intimate clips and hardcore sensibilities peeked a little more than just my interest with videos like the holiday hit Krampus carol and the cornucopias play on her forthcoming WET LOOK release, an ever so succulent installment.

Actually (her name and band name) is something of a criminal in all her portrayals, be it art porn, pop stardom or the even ruder grind of being a live performer. With utmost respect, admiration and amiability, I present a little starstruck nobody reporters’ intimate conversation with one of music and  image historys’ most compelling artists. Looking like a young Monroe or more voluptuous, Venus inspired Molly Ringwald in her mouthwatering video for “Don’t,” off her upcoming album WET LOOK, I’m sure you’ll be dripping as well. For our Q&A we got to the heart of some compelling gender studies AP course questions and the back stage all access on her tireless and risque performance history.

I found your work as Actually via a friend here in Mexico City, Abdi Taslimi. He showed me some video he pops up in of yours. It’s a delightfully camp-production. By the looks of it, it was intended as a film, but it works very well as a exceptionally ridiculous music video. Did you start out as a musician or as a film and performance artist? Is there a line?

I love Abdi. He is one of my sphinxes.  I started out as a musician. Piano and cello lessons; church chorus and all that.  My first band was in senior year (but I was too shy to perform live…it was really just me and my 31 year old ex-junkie boyfriend. I went to a lot of AA meetings with him and recorded stuff on a digital 8 track). I went to college as a painter, but then I threw it aside to do video. I combined my music with video and discovered that I loved to perform in this way…so the term “music video” became something like a life choice for me. It took at least three early music videos and two more bands for me to really get confident to perform live.

What was going on in that video and with A. Huizenga at that particular moment in history? Abdi says everybody walked out of the screening after 20 minutes… gasp… was it that horrible? I’ve been promised a full screening…

Well, it started at 2 am on a weeknight (I think Tuesday). The main cast and I arrived in a limo that I think looked like a Miami hearse (it definitely felt like one). Everyone was totally trashed and drugged before the movie even started.  Plus, the first viewing was 3 hours long. Some people said that the pain of endurance is what made “Write a Book About It” truly contemporary art, but I made a re-edit anyways….because even for me 3 hours was too long!  Abdi actually co-edited the re-edit with me and its 2 hours now.  Its all up on my vimeo channel…in 10 easy to digest chunks (if you have a bottle of wine or tequila at your side).

What can you tell us about the Mae West Society?

The MWS is a very select few (my gay husbands). Mae West is amazing in how she wrote and acted and dealt with the censors of the time. Also…she was still doing that look and attitude in films up into her 80’s. Her one liners are brilliant. “Its not the men in my life, its the life in my men” etc….

Please, tell me how the Krampus concept emerged…

I went to Europe to perform with my old band Hard Place. I think it was November. I was walking down the snowy streets of Vienna, looking in shop windows when I noticed all these devil cookies next to Santa cookies…then I saw stuffed animal devils with their tongues hanging out, hiding under Christmas trees. I was amazed. And then my friend told me about Krampus. I knew I had to make a music video about this evil black hairy beast for Christmas. I truly love Christmas…and Krampus just makes it THAT much jollier.

When and to what affect did you switch from your more campy video approach to these more sundry scenes?

You mean the SoftRock videos? My snuff pop porn is done with Socrates Mitsios, who I started sleeping with a year and 2 months ago. We went to Greece to make a music video and it turned into a soft porn— Me singing while getting fucked. It was great…the first time I ever had sex on camera! I did end up making the music video (“Don’t”).  But the art film we made out of it is even more powerful in a beautiful way and its called SoftRock. We just completed SoftRock2 . It was picked for a festival last week (Diane Pernet’s ASVOFF) to be shown at the Pompidou center in Paris. But it got censored…they actually turned off our projection! So in the space, you see three sections…two projections are playing some boring shit…and then on the far right its just a blank space with our names on the side! Who knew Paris was so conservative! I knew they were terribly mean and pretentious, but I thought they at least loved sex! The crazy thing is that there is never any full on viewing of genitals and you barely even get a glimpse of nipple! It was the intention of the video that shocked them I think… It might have effected them more than they wanted. Not easily digestible for old fuckin french Pompidou film curators with couture sticks up their asses. I’m pretty sure I saw a display of Vienna Actionism there when I was 14 last time I was in Paris, but whatever. (note- Diane Pernet liked the piece and congratulated us on being controversial). We are currently working on SoftRock3 which is half wedding and have sex sacrifice. 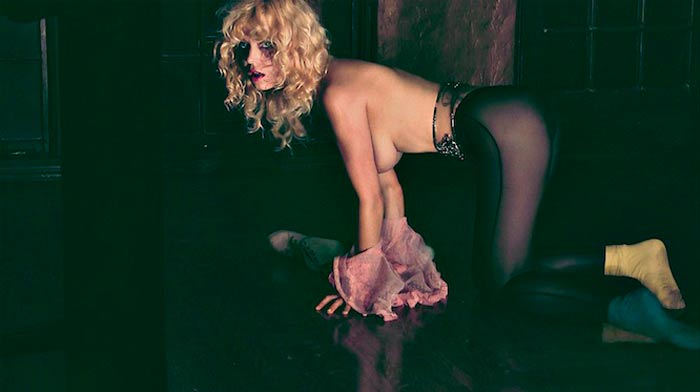 How is Actually a continuation or departure from your previous work?

Actually is my pop singer name. It is also my name. I can’t really say that I have ever “departed” from anything I have done, but I have evolved. I can’t even remember a time when I wasn’t thinking in these terms.  The way I’ve displayed these feelings has evolved and become refined artistically. I have been sexually demented since I could walk. I used to draw dirty things and hide the booklets in the back yard when I was in preschool. This might be why I became an artist…so I could see the things I fantasized about drawn out.  I think a lot of people forget about the things they thought about and did as children. I don’t. I still have the same sexual fetishes and desires as I did then; I’m just more developed conceptually and physically. Everything I have done from then to now is a development of those inner fetishes and fantasies.

Can you tell us a little more about that track Abdi? Not to beat a dead horse but, I’m just curious where the song comes from…

Haha. Me and my band mate Chaz were making music at his apartment and Abdi and Jacinto came by to have a couple drinks. We were messing around with a track and then I started singing about Abdi because he was sitting right there looking really cute and inspirational as usual.

A lot of your videos seem to be dealing with the sexual and gender [roles, I’m a stoner and wrote rolls, whoops]. Do you believe that popular images of women serve some sort of fertility right for our “modern” society, or are they just appropriations like everything in a capitalist society?

This question is awesome for a college or AP high school essay exam! (“gender rolls” that is cool! Rolling around in sex pastries)  I think that the image of woman in any art piece (anything agreed upon as art by modern society) at once displays the muse throughout time according to heterosexual males but also the style of that particular time period. You can always tell the time period by the woman, because the artist is displaying the ideal of that time period. Whether naked,  dressed, looking away or addressing the viewer–prostitute or Venus– she is always a muse, always sexual because a woman represents sex even in chastity. A “muse” doesn’t mean she has to be holy or god-like; a muse can also just be something that enhances a masturbation session.

In my art, I sexualize the male a bit more. I like to look at pretty boys the way straight men have always looked at pretty girls. However, People say I look at men the way gay guys look at boys, but whatever……Beautiful males are my muses.

What can you tell us about the art/music scene where you’re based?

I have been away from Los Angeles for a year but I guess I would say its getting a bit better…It was kind of too mopey and badly dressed after the electro clash time. Its at least getting gayer than it was two years ago.

What is performance to you?

What can we expect from A. Huizenga in the future?