“How many licks does it take to get to the middle of the cake? Giggle if you’re awake. Chuckle if you’re asleep. Nuck if you buck. Now we’re countin’ all the sheep. Ba ba ba, blah blah blah.” 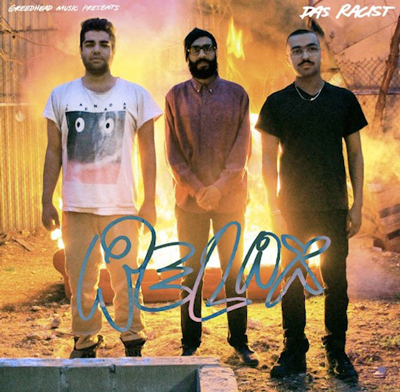 Das Racist are about to arrive in a big way. Maybe you were fortunate enough to catch them at Pitchfork earlier this year. Maybe you’ve been blessed with the previously “unreleased” tracks they’ve been banging out leading up to Relax. Maybe this is your first time hearing of Das Racist’s very existence. Whatever way you slice it, their new album – part activism, part comedy and 100% hip hop, Relax guarantees listeners a true discovery of what the world looks like for those of us conscious enough to enjoy what it has to offer.

Title track album opener Relax begins with: “White devil…being served coffee by white devil sidekicks.” What did you expect from Das Racist? They go on to rap about the problems around the world cleverly wording Kashmir vs. Cashmere in one instance, pop culture icons like Lady Gaga, Otis Redding and poetry slams…and that’s all in the first track.

Switching tones, tongues and dialect on the second track Michael Jackson, Das Racist show off their bilingual ability and end the first verse with a scream, “ I’m fucking great at rapping!”

Das Racist is selling Oxycontin and mellowly pandering for “everybody to love everybody” and “give us all your money” on hilariously clever Brand New Dance chock full of Sister Sister references and “slacker rock rap.”

Recently leaked and in line with previous releases Sit Down, Man and Shut Up, Dude, Shut Up Man includes nods to Timothy Leary, Mrs. Doubtfire, American Bandstand, “idiots all bark no bite” and countless opportunities to praise, laugh and contemplate what hip hop can be.

Short and sweet Happy Rappy counts us to twenty, encourages listeners to “get that guac’, get that money” and immediately jumps into a hard-hitting fast-paced reference fest with the likes of Larry Johnson, Fonzie, Agatha Christie, Dracula, Waka Flocka and Johnny Depp among others.

Selena surrealistically lays out some scenarios including Leonardo DiCaprio’s role in Catch Me if You Can, Edvard Munch, David Bowie, John Carpenter, Danzig, Dennis Rodman and his book Bad As I Wanna Be, and they go back and forth with each other: “I am the Walrus. I am the walrus too. You couldn’t walk a mile in my walrus shoes.” They’re proclaiming this as “Hipster Rap…no Queens Rap.”

Rainbow in the Dark has Das Racist demonstrating themselves as “the new Kool G Rap,” likening themselves to The Beatles, labeling their sound as “panic attack rap” and, quite frankly, is one of the most imaginative and creative rap songs in a world of uninspiring wordplay. “No trust in white face like Geronimo…Wikipedia Brown… it’s fun to do bad things like rap about handguns…vegans, skateboards, etc…I’m on the internet cuz I’m an internet thug.”

In all seriousness though, Das Racist’s use of language and ability to blur all the ever-decreasing lines put them in position to garner all the attention they deserve in the not-so-distant future.

A contradictory conundrum in the rap game: Can you make fun of yourself while making fun of the game while talking yourself up just enough? Das Racist done figured it out, although they’re ironically bordering on too much humor, leaving themselves liable to get labeled as rap’s Flight of the Conchords. They’re bringing that style to Reggie’s on Thursday, 10/20 and you better bring yourself (and your friends) there if you know what’s good for you.