After an exhaustive search spanning two decades and countless books, El Guapo has found Waldo. However, now he (El Guapo) wishes he had never embarked on the journey to find the iconic character who entertained and frustrated millions by inspiring the longest hide and seek game in history.

It turns out Waldo is not doing so well. 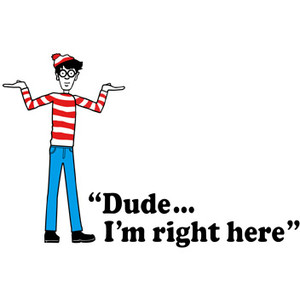 Found in a pool of his own filth outside a seedy motel, his trademarked candy cane striped shirt and matching hat now a putrid yellow-brown, Waldo has seen better days.

“What do Mexicans have that I don’t? Why the hell is everyone trying to find them so badly? That’s not even a challenge. They’re everywhere,” he shouted at no one in particular and waved his crack pipe like a magic wand.

“To listen to some politicians tell it, these undocumented workers are like leprechauns. They’re hoarding riches and if you catch one and shake him/her upside down, gold coins will sprinkle to the ground and breed. I mean, I know I’m just a character from a children’s book, but even I wonder if perhaps it’d be smarter to go after wall street crooks and overpaid CEOs. I mean, if you’re “protecting the economy” and all. I’m
just saying, that, at least, would also be somewhat of a challenge.Line up a bunch of old white guys in suits and find the one who swindled millions. Now, that’s a challenge.

“Last week I was walking through a crowd who happened to be standing in an orchard in Georgia – because I do shit like that, you know, walk through crowds- and two young children walked right past me and started
attacking some man who was picking a peach off a tree.  They shouted to the man that he should go back to Mexico and proceeded to pelt him with stones and chant “USA.”

“Right past me. Didn’t even give me a second look. I’m wearing a damn red and white striped shirt. I’m a walking goddamn candy cane. Explain to me how I go from selling 40 million books worldwide to this.” Waldo gestures to his urine-soaked pants and the prescription anti-depressant bottle rattling in his hands. “And just to beat it all, the man wasn’t even undocumented or Mexican. He was simply out on a walk with his family.

“It’s getting so bad I’ve started wearing cowboy hats and hanging around outside of Home Depot. I sell oranges along the freeway. I’ve picked up some Spanish.

“It was great at first. All of a sudden everyone wants to find you–especially in states that passed those new no-nonsense immigration laws, you know- Georgia, Alabama, Arizona. Inevitably someone throws you to the ground with a knee to your neck and seems pretty happy to see you, but as soon as they realize you’re not undocumented, they don’t care. I’m Waldo for chrissakes. You should be thrilled to find me. Punch me. Beat me. Deport me. Just don’t ignore me, you know?

“Sure, I may not be doing so great now. I’m aware. But what the hell am I going to do when the presidential campaign heats up and every politician starts to shout even more hysterically about those terrible immigrants destroying the country. I mean, is there any chance of anyone giving a turd about me when there are dastardly immigrants to find, those intent on bringing the country to its knees?

“Of course not. I’m going to start buying my happy pills by the crate at Costco.”

Waldo then proceeded to relieve himself on an American flag as no one took notice.