The Chicago Transit Authority’s Red, Blue, Brown, Green, Orange, Purple, Pink, and Yellow Line trains were not always what we know today. Over a half million people ride one or more of these train lines each day and many may not realize that the train system wasn’t always controlled by the city, let alone allowed for easy and free transfers.

The history of our rapid transit system stretches back over a hundred years. Many stations and lines were created and abandoned during this time. The creation of our train system, which we too often grumble over, included the organization of several companies and tremendous efforts of hundreds of individuals. Imagine, there was a time when you could not easily step out of a train station into downtown because businesses and community members did not want trains coming into the central business district.

From steam locomotives to wooden rail cars, our lines evolved into what we know today: The second longest rapid transit system in the United States. Even with annoying constructions, delays or the occasional strange fellow passenger, our trains make navigating the city without a car possible.

It all started with the South Side L and eventually other companies came on board with the Lake Street L, the Metropolitan L, the Union Loop, and the Northwestern L. (In case you did not know, people in this city lovingly call our train system the “L” or “El” because a major part of the tracks are elevated. There are tracks that run underground, run at street level, or a combination of any of the two but the original first few lines were elevated.) 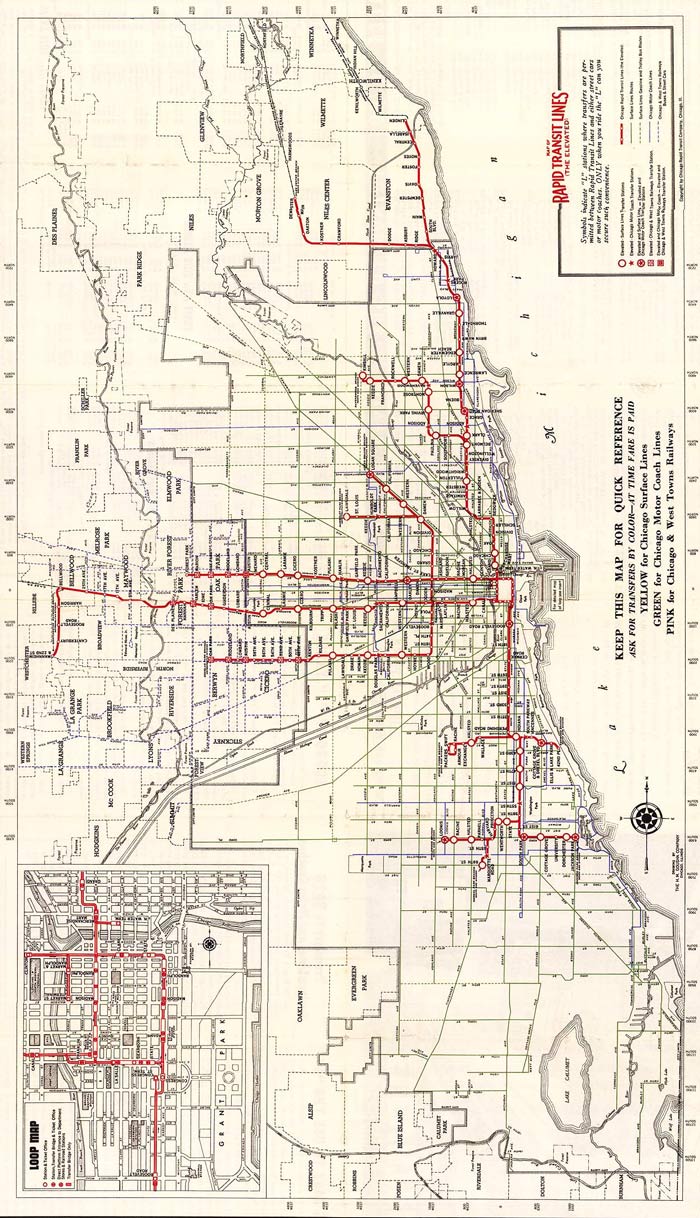 The South Side L
In 1892, a combination of over 70 companies created the Chicago and South Side Rapid Transit Railroad Company. They created the first line that ran from a terminal at Congress Street to 39th Street, a distance of under four miles in a straight line. The intention was that this line would run to the Illinois and Indiana state line but that vision was never fulfilled.

Nicknamed the “Alley L” because it ran mostly through alleys, the line eventually was extended to the front entrance of the World’s Columbian Exposition in Jackson Park. Another famous stop was the Stock Yard Branch.

The Lake Street L
Opened in 1893, this franchise was owned by Michael C. McDonald who had earned his wealth through gambling and other questionable means. This line ran from 52nd Avenue (now Laramie Avenue) to the city’s western limits at Market (Wacker Drive) and Madison. The Lake Street L had the same issue as the South Side L—neither dropped passengers off in the city center.

The Metropolitan West Side L
Opened in 1892, this was the first elevated train to use electric track technology. The Metropolitan West Side line ran from the southwest to the northwest side with the main line starting at the Franklin Street terminal. From there, it branched off into lines that ran from Garfield Park, Douglas Park, Logan Square, and further northwest. A branch of the line also stopped a short distance from Humboldt Park.

The Union Loop
Charles Tyson Yerkes developed a common terminal downtown that served all of the elevated lines. There were a variety of business complications as the various rail lines were owned and operated by different companies. Regardless, Yerkes is credited with bringing together the various owners to have their trains routed to the center. He also accomplished the major task of getting downtown store owners to sign over consent to allow construction of structures overhead. The Union Loop gave us what we know today as simply “the Loop.” This creation allowed transfers to be completed from line to line and also created direct entrances to some buildings. For those that remember, Carson Pirie Scott & Company’s location on State Street was where the train station’s entrance was born.

The Northwestern L
The Northwestern L was plagued with financial problems from the beginning. The line was incorporated in 1893 but service did not begin for another seven years. Financial troubles continued and, along with the country’s economic depression, full completion was delayed numerous times. The line first ran from Fifth (Wells) north to a terminal at Wilson Avenue. The line was extended over the years running through the North Shore suburbs and eventually into Wilmette.

It was not until the 1940’s where the Chicago Transit Authority took over all of the train lines. Some tracks were created, others eliminated, while wooden train cars were retired and steel cars were introduced. It was not until 1993 when the L lines were officially designated by color.

Red Line – The Red Line runs 24 hours a day from Howard to the north to 95th on the South Side. It’s the answer to that old joke: What’s the only thing White Sox fans and Cubs fans have in common? The Red Line. Need to get to Wrigley Field or U.S. Cellular Field? The Red Line will drop you off close to either field.

Brown Line – This line runs north from Kimball to the Loop. If you ever wonder why it seems that there are so many stops on the Brown Line, well, it is because there are. The line runs a little over 11 miles long and has 19 stops.

Orange Line – A newer line, the Orange Line runs from the Loop to Midway Airport.

Purple Line – The Purple Line runs from Evanston and Wilmette in the suburbs to the Loop with stops along Northwestern University’s campus, thus the color purple.

Pink Line – The newest branch of the CTA, the Pink Line started operation in 2006 running from Cicero, Illinois to the Loop.

Yellow Line – The Yellow Line, or Skokie Swift, is a shuttle service that runs from Howard Street to Skokie, Illinois.

Visit www.chicago-l.org for more great facts and maps of our beloved L Train.