Uninhibited Parameters, the new show of work by Riley Henderson at Chicago Art Department, is two years in the making. Realizing that the photographic medium limited his ability to express his most recent insights into life in America, especially the immigrant experience, his work has evolved from being mostly based in photography to become more inclusive of sculpture and installation. The work in Uninhibited Parameters shows how clarifying one’s artistic voice can come by allowing boundaries between mediums to become flexible as new understandings arise.

This exhibition is telling of where Riley is at in his life, in his thoughts, and his intention to use his art to pay homage to something outside of himself and it acts as the other side of a bridge that connects his past beliefs, present ideas and the social activism he has become a part of. While in the final weeks of preparing for the show, I asked Riley a few questions about the ideas and work outside of the studio that influenced the pieces in his latest exhibition, what got him to this new place in his practice and how to secure a honey sponsor when you need one. 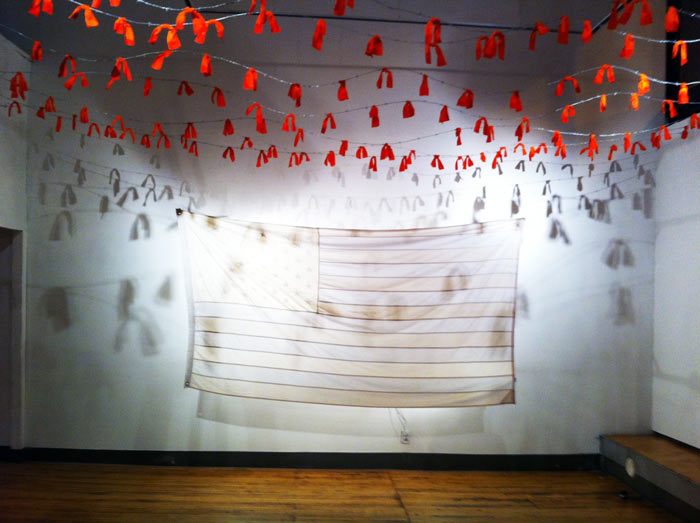 Tempestt Hazel: Can you talk about the title of the show and what it means?
Riley Henderson: I titled it Uninhibited Parameters and it speaks to a few different things. Personally, this show is a big turning point for me just because it’s a different kind of work and thought level that I wasn’t at previously… I’m taking everything that I learned before and creating something new with it. I haven’t moved beyond that step. I’m on the same plane. I’m still moving forward and still progressing as an artist.

Uninhibited Parameters talks about that but also [shows] my observations that [inspired] the show–issues of immigration and the debate itself. [This is] kind of my personal opinion about how important it is that there are no borders and thinking about parameters as–the outside parameters as borders and confining ourselves, in this case confining America, to this spot and not really understanding how American culture comes from outside as well as within.

I think in terms of concept for the show, the idea of borders is really important because I’m thinking of movement–movement of bodies, movement of mind and how important it is for a culture to grow and progress…. The physical borders that we put up such as the fences that are being built along the thousands of miles that we share with Mexico, [the] border patrol and the billions of dollars that go towards that, and also the act that Arizona passed, SB 1070–one of the most racist bills passed during our generation. It creates such fear, anger and hate directed towards the people that it’s targeted at. Then, [in] the people it’s not aimed at, it creates this fear and hate for these people who are then thought of “illegal and dangerous” because this government and law says so. SB 1070 creates prejudice and hate and makes it so much more real when it shouldn’t be.

Ultimately, the title speaks to both where you’re at now in your practice and also a greater kind of current social issue.
I guess I don’t know much about the political and social ramifications of immigration so I’m hesitant to say that there should be no border. But, personally, I don’t feel like people should be confined or held back. I feel that’s a very unnecessary push and pull between “us” and “them,” which creates this gap, and I think that’s dangerous, especially relating to the larger racial problems in America.

At some future date that isn’t too far off white will no longer be the majority and we’re a country that’s set up to support white folks. What happens when that’s no longer your population? What happens to the people who make up the majority of your population and you’re not supporting them? That seems so dangerous and frightening to me–it gives me chills every time I think about it. And there doesn’t seem to be any kind of shift, especially with the way we treat big business and where our priorities are. I keep coming back to that–uninhibited thought process, uninhibited movement of bodies and minds. So, I guess that’s where it comes from. 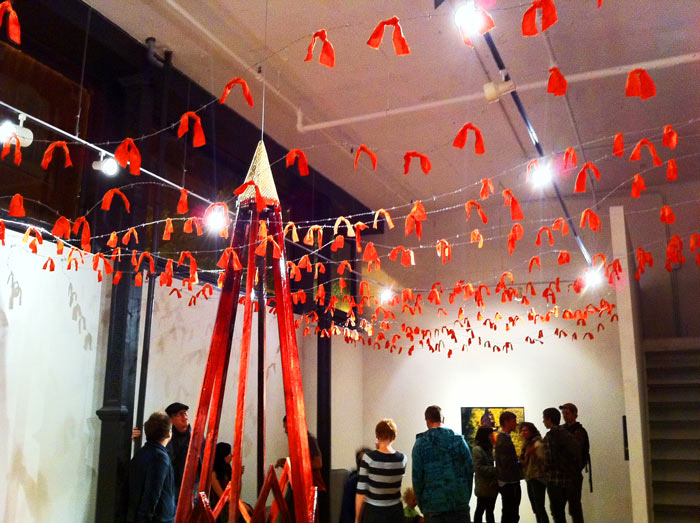 How has your process and medium changed over time? I was first introduced to your work through photography and I have a feeling that this show will be largely non-photographic work.
There’s one photo in the show and I guess [my medium] has changed completely. It is stuff I’ve done all my life. I like to build and I love to use my hands but I wasn’t able to really entertain it because I didn’t have time. I wanted to make that flag, the bleached flag, then ACRE happened, the artist residency, and that gave me the most perfect two weeks to focus and to try these things. So, I made a few different flags, tried sewing my own. It gave me an opportunity to see how well bleaching the flag worked conceptually.

Something that I learned from that flag is that my work can be so much more powerful if it is more accessible [and] if there are more entry points. My photographs were telling a very specific story from a very specific kind of point of view. I look at those now and I don’t regret them at all and I think they were very important for me to make, but I think there were a lot of things that were wrong with them that I would definitely do differently. But that was perfect for the time–for where I was at that time. So, I think that the work has changed a lot conceptually as well as physically because I’m doing a lot of installation.

The centerpiece of the show is going to be two large installations. One is strips of barbed wire in rows going across the ceiling with strips of orange cloth tied in knots along the rows that have been dipped in honey. Then, the main piece in the center of the room will be a 12-foot steeple that I built. The framework of the steeple [is] suspended from the ceiling at about an inch off the ground. The steeple will also be covered from top to bottom in honey. Then there’s the flag at one end and a new photograph at the other. Then [I will be] creatively using the lighting to create a shadow on the ground in a kind of compass shape, talking again about movement and direction.

Working with non-photographs has made me think a lot deeper about things because when you have to think about the stitching you’re using or the type of wood or the pattern of nails there are so many more aspects to it than I ever thought there could be in photography. I think there are some photographers doing it and that it can be done. But it was a necessary step for me to move past that. Not past it, but to add things to [it].

Can you talk about the process of this work? How does the physical process and hands-on, labor intensive production of some of these pieces work with or reinforce the concept of the exhibition? ..or does it?
It definitely does. I really like it when you can see the artist’s hand in the work—which is another thing that is kind of difficult with photography sometimes. I like the spontaneity of working with my hands because I’m not a skilled artisan in anything really. So all I have to go off of is my concept and my vision. Then [I] find ways to execute that as efficiently and poignantly as I can.

Specifically with the steeple piece, I had been reading a lot about [them] and the symbolism behind steeples and cathedrals. I was drawing designs in my book and trying to figure out whether or not I wanted to make it an 8-point octagon or a hexagon. And I figured out that an octagon would be very hard to do…

Why?
Because of the math. [laughs] And the angles I would have to cut. So, this is basically what I ended up doing. (…pulls out his sketchbook and starts showing his planning blueprints.) 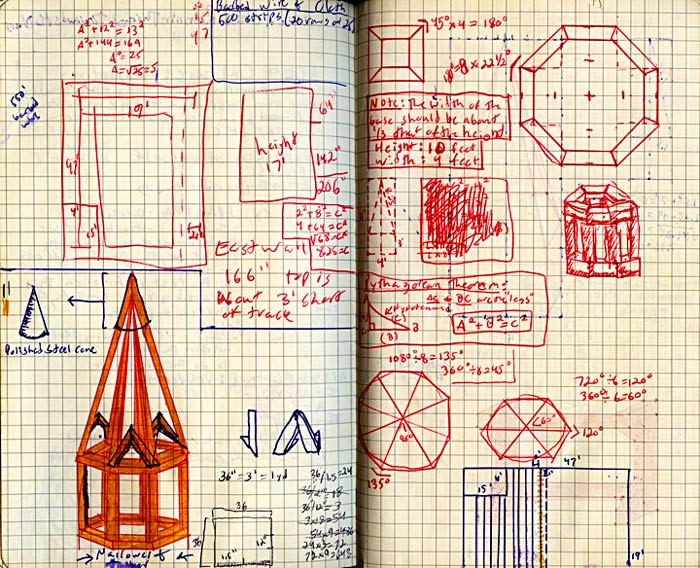 In terms of the flag–well, with everything–I think that I find out after the initial concept. It’s kind of happenstance, but I get the vibe that a lot of it was already in my head. So, with the flag, I wanted to bleach it. I hadn’t really thought about how aggressive bleach is and what that meant–I just had this image of a whitewashed flag in my head. I didn’t know much about the artist that worked with the American flag–Jasper Johns. I didn’t study many artists outside of photography while at Columbia [College Chicago]. For a lot of people I think that is the first reference that gets in their head. Since I didn’t know much about him I was flying by the seat of my pants on that. I knew what a white flag meant to me. [I was thinking] about the removal of culture, and how that affects me, how whiteness affects me. And this idea of how you lose something when you remove the history and the culture–it’s something that happens too often in America. While I was bleaching the flag I started to realize that it was breaking down the fibers of the fabric, it also symbolized surrendering. There’s so much information that comes during the process of actually making [the work].

It’s really interesting to me to think about the breaking down, and as bleach breaks down the fabric it mimics the break down of culture that you ultimately achieved conceptually. I find it great and interesting that it’s something that just happened that you maybe weren’t expecting.
It was more organic than I thought it would be. You get this idea in your head and [you think], “That’s what I want this to be–exactly this.” And then you make it, it changes, then the concept changes. It’s still the same thing but more layered. The more you can understand something…the more you can understand yourself and why you’re making it, the piece just becomes much stronger.

Read Part 2 of this interview on SixtyInchesFromCenter.org