We met at Efebina’s Cafe on a cloudy September day, which turned out to be Leo Tolstoy’s birthday as fate would have it. Before I even ask him a question, Blake Russell is opening our discussion with a powerful excerpt from Tolstoy’s writings on civil disobedience and non-violence which sparked his idea to unleash his ARTWAR:

“No feats of heroism are needed to achieve the greatest and most important changes in the existence of humanity…Strength is not in force but in thought and clear expression of it and therefore they are more afraid of expression of independent thought than armies. Hence, they institute censorships, bribe the press and monopolize the control of religion and of schools. No illions of troops, no wars or revolutions will produce what this simple expression a free man may  in what he regards as just independently from what exists or what was instilled into him…What can I do alone against all this ocean of evil and deceit which overwhelms us? Why should I express my opinion? Why indeed possess one? Perhaps these contradictions are an inevitable condition of our existence. Why should I struggle alone against all the evil in the world? We all complain of the senseless order of life which is at variance with our being yet we refuse to use the unique and powerful weapon within our hands. But on the contrary, under the pretext of struggle and evil, we destroy the weapon and sacrifice it to the exigencies of an imaginary conflict.”

The words on paper don’t do Blake’s passion justice. His voice is boisterous. He talks with excitement and enthusiasm. His quotability factor is skyrocketing as we shift to how he played in an adaptation of War and Peace, which he points out, “isn’t meant to be a performance piece.” This led him to read up on Martin Luther King and Henry David Thoreau who influenced him and eventually led him to ask the inevitable question that every one of us should be asking regularly: “What can I do?” 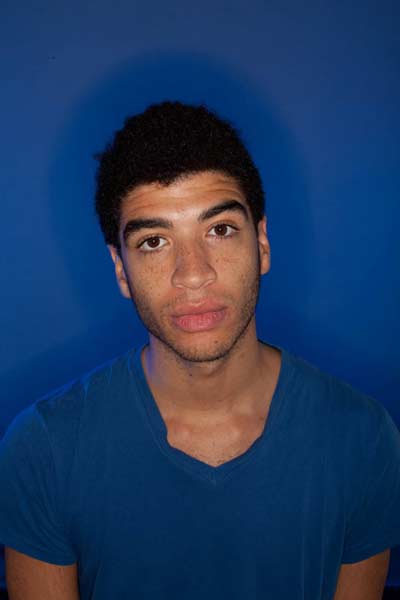 Blake has been involved in many epic performances throughout the city since landing here in Chicago via Missouri. He’s staged balloon fights on Michigan venue and non-violent meditation walks outside the MCA, believing all the while that “art is a force like war but completely unlike war. It can be destructive but is funnelled through positive channels, actually creating something that could be beneficial, that could be visceral.”

Think about the two three letter words. Art and war. Think about the emotion, the images, the energy the short words evoke. The opposite of war isn’t peace…it’s creation. And Blake’s creation of ArtWar promises to evoke the senses on all levels.

ArtWar starts on September 16th, “taking the idea of what war is and turning it into something enjoyable and entertaining…and visceral for the performers. We want people to forge through and find their own way.”

“Why not make art instead of making war?”

At this point of our conversation, I note that we have witnessed war change the world throughout history. I ask Blake if art can change the world for the better and reverse the damage that war has done.

Blake responds with a resounding “definitely” and a quick-handed Thoreau quote in his back pocket: “The highest quality of the arts is to affect the day.”

He goes on to talk about the power of performance art, how much he loves to watch people react to art, the constant cause and effect of life and we wax poetic on the preconceived notions of art and modern day Tolstoys or Thoreaus. Is their timelessness enough? 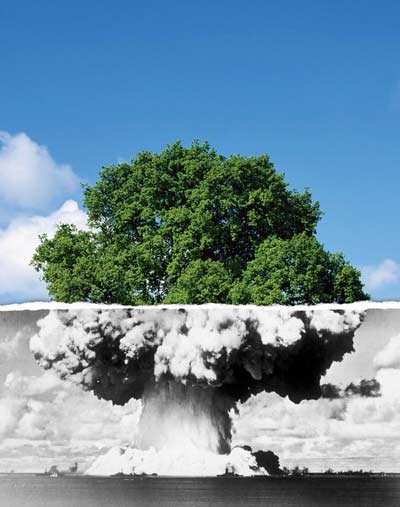 “They’re expounding on their heroes’ ideas, so I don’t think it’s enough. As far as modern day Tolstoys, I think we all are. Our art is our way of expression and truth telling. My form of truth telling is through art, collaboration and public performance. Any way possible. We can’t just sit and wait around for change. Obama sparked that, and then kind of let it die. Everyone was so rallied, and nothing happened. To take that and do something with it, those are the modern day Tolstoys, Thoreaus and Martin Luther Kings.”

Blake has a team of 100+ artists lined up for ArtWar, and they are his modern day truth tellers and muses. “This show is their bounce back, their echo.”

The dirty, gritty space of Treasure Town excites Blake to no end. “I fucking love Treasure Town. They make it into something Chicago really needs, a place for experimentation. You won’t find this (experimentation) in New York. Los Angeles doesn’t have this.”

“I just think it’s time to throw convention out the window.”

Blake has unconventionally created a show, he’s relishing in his creation and he loves this city. “I don’t think Chicago has ever limited me. It has given me the opportunity to wake up the masses and build community.”

ArtWar will awaken you physically, emotionally, spiritually. This is Blake’s way of “occupying minds.” He has plenty of motivation from his heroes, who are activists. He wants you to take action. He “doesn’t have time to sit around at home not accomplishing anything.” So I ask him where he sees himself, the arts and the government in ten years…

“I see myself doing the same thing, just on a larger scale. The arts community will be at the utmost of collectiveness, no pigeonholing artists into these categories. The only way to get our arts funding back is to get us all to come together. We can’t sit here and be divided. We have to be together. And the government: personally I am going over in my head our Constitutional right to abolish the current government. The current government is not looking out for the good of the people. We are the human race. A race of species like butterflies or elephants. Culturally, we are relatively new here in America, but we are not a color. We are a person first. We just want to bring everyone together.”

“I don’t know exactly what to do to change the world, but we can look at history and do something completely unusual.”

By knowing our history and learning from futuristic viewpoints, we can truly progress and unite the people. 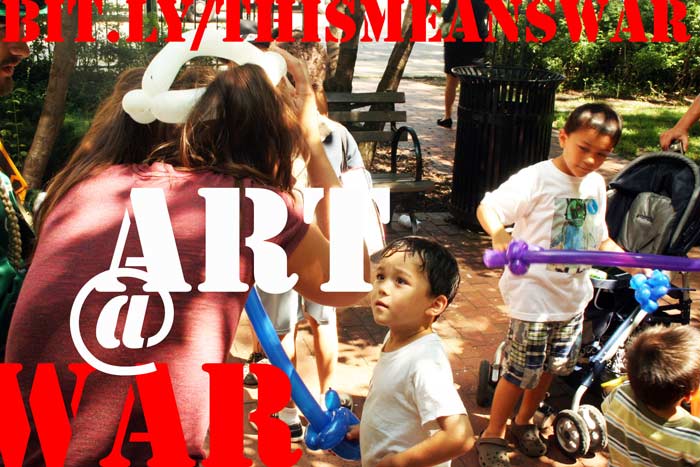 Be on the lookout for Far Out, where Blake is pitting folks from different states against each other. “Not pitting them together, but putting them in a pit.”  He wants to incorporate funk. The idea is there, and be on the lookout for the Counter Counter Insurgency series in the future from Blake. He has many ideas and many plans

“You just get an idea and you go with it.”

We all get ideas, but not all of us have the guts to put our ideas out there for the public to enjoy. Cheers to civil disobedience. Cheers to non-violence. Cheers to making a difference in the world. Cheers to Blake and his truth telling tendencies. Cheers to you for precipitating progress and participating in art at war.

“I’m ready for the new, and I think alot of other people are too.”