Regardless, or shall we say in spite of, the rampant violence, insecurity, and social chaos that has plagued Monterrey She’s a Tease continues to infect international dance floors and airwaves with their new album “Millionaria” (Nacional). The band began their career in 2004 with their first EP “Long Time Rolled,” the single “Datos Intimos” followed in 2009, this year “Millonaria” is the band’s first full length album. She’s A Tease is Pibe, Hugo, Chico and featured rappers like Milkman, and like most things Monterrey they embody the marrying of American and Mexican pop culture seamlessly. Their name is a reference to The Breakfast Club, and most of their sounds contain at least one U.S. element, from English lyrics to movie references. 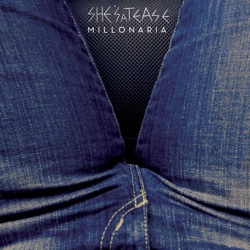 Millonaria has already proven to be a very successful album since their song, “Why,” has clogged up the YouTube tubes. “Why” opens with an autotuned intro that is reminiscent of old school 90s boy bands and then morphs into a reggaed out beat that is matched by the singer’s explanation of all the things he likes about the anonymous woman who is breaking his heart, but the ease of the beat makes it hard to believe the singer is really in pain. “Pan y Vino” would be at home on the sound system at any Boystown disco.  Fiebre de Jack has one of the best music videos I’ve seen, along with an unstoppable beat that will inevitably lead listeners to do the robot. “Ciudad Abierta” is a synth pop taken on the current goings on of Monterrey.

Their sound is exactly what I remember Monterrey’s antros to be like: loungy, danceable, beat-driven and an amalgamation of everything and anything you can get your hands on. This album remains true to the electro synth disco pop sound that made them famous enough to have played at the International Music Festival, SXSW, and Vive Latino. She’s a Tease will surely continue to thrive with “Millonaria.”