Señor Flavio, aka Flavio Oscar Cianciarulo or co-founder and mastermind of the legendary Los Fabulosos Cadillacs continues to alter the airways with a new album, Nueva Ola that was released on August 16. Señor Flavio founded Los Fabulosos back when I was still in diapers in 1986. They released numerous albums, the height of which was Vasos Vacios, which won a Grammy for the iconic song “Matador.” From there, the band went on and returned from hiatus, but in the 2000s Sr. Flavio went on to make good use of his talent by spearheading a long list of projects including Misterio (a three-piece band that includes his son Iovito), La Mandinga and Ricardo Iorio. Sr. Flavio has also worked as producer and songwriter for other contemporary Latin American bands. 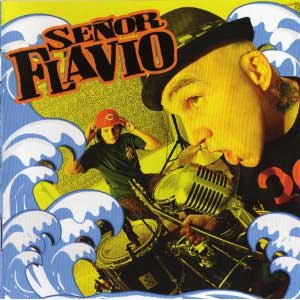 Nueva Ola, as the title suggests, steers clear from the Cadillacs’ iconic sound that created Latin American anthems such as “Mal Bicho,”  “Padre Nuestro” and the aforementioned Matador. Yet, the fun-loving ska and rockabilly sound is still the underlying trend in the album, most notably in “Olas” and “ Dagas Doradas.” Still the album grapples with current social issues. The debut track “El Regalo” is a danceable reflection on art and the interaction between audience and artist, as it is to be given to the audience “sin pedirle nada a cambio” (without asking you for anything in return). “Malos Tiempos” touches on the role of technology in social interactions with an introspective melancholic tone. “Linda” discusses the abuse of workers with a deceptively contagious beat.

As a whole Sr. Flavio’s Nueva Ola sounds like a reflection on a lifetime of music and the responsibility that it contains for all it reaches. In this vein, the album features performances by Astor, Sr. Flavio’s younger son, Wallas of Massacre, Guille Bonetto of Los Cafres, amongst others. The incorporation of these musicians illustrates what Sr. Flavio treasures most: family and extensive musical interests. Here’s to Sr. Flavio continuing to demonstrate his commitment to fulfill the prophecy once claimed in Mal Bicho that “la canción que es valiente es canción para siempre” (the song that is brave is a song forever).