By Luis A. Martinez

United Neighborhood Organization’s (UNO) new charter school on the southwest side of Chicago at 3434 W. 51st Street is set to open its doors in September. As a resident of the neighborhood, seeing the construction of the building over the past several months has been a daily source of curiosity. I have watched an architectural idea take shape with each stainless steel panel and pane of glass erected. No doubt the building symbolizes an architectural statement of progress for the predominantly Latino community of Gage Park. With this in mind, I began to think about the spectrum of cultural expression or Latinidad through architecture and the various messages that it can express. 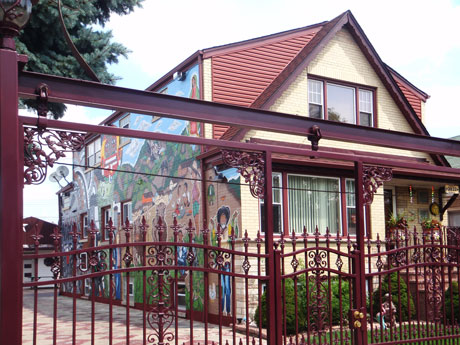 UNO’s six-hundred student elementary school is stylistically influenced by modernism. This architectural philosophy took rise in Europe and the United States at the turn of the 20th century and was popularized by Le Corbusier from France, and Walter Gropius and Ludwig Mies van der Rohe from Germany. These architectural theorists created a social, technological, and aesthetic agenda that promoted the advancement of society through industrialization and modernity.

In the case of UNO’s charter school, the building is designed with a unique palette of materials, has a non-traditional form, is restrained from exterior ornament, and highlights its structural skeleton. The ensuing piece of architecture is strategically devoid of cultural expression and is intentionally distinct from the materiality of its immediate residential context. Clearly, UNO has its gaze towards the future and expresses an architectural statement of progress that is strictly in line with their educational philosophy.

The school’s design represents the avant-garde end of the spectrum. Comparatively, other buildings such as the Rauner Family YMCA at 2700 S. Western are stylistically modern in form and materiality but use color as a cultural nod in a decidedly Luis Barragan fashion. A more traditional form of expression can be found at Benito Juarez Community Academy High School at 2150 S. Laflin Street with its murals honoring the Mexican President Benito Juarez. And finally, at the opposite end of the spectrum, a modest and interesting expression can be found at a residential home near the UNO charter school at 59th Street and Pulaski Avenue. The home is aesthetically compelling because a mural covers the entirety of one of its sides. The mural depicts an agrarian scene with religious and Aztec imagery juxtaposed against graphic symbols representing modernity.

As Latino designers, architects, and urban planners come to shape a new American urban landscape they will have the distinct opportunity to express (or not) their cultural identities. The spectrum of expressions as in the examples presented is wide but each seeks to represent and promote what the organization, community, or designer values. The synthesis of cultural values, identity, and architecture is exciting as Latinos begin to design a new future for themselves on the southwest side of Chicago.

One thought on “Modern Architecture Arrives to the Southwest Side”