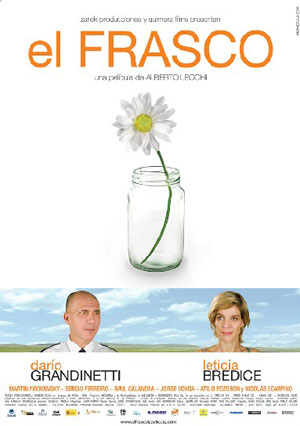 A man, a woman, a jar – not exactly a recipe for a romantic comedy. But sometimes all you need are six words. At least Hemingway thought so when he came up with the now legendary story: “For sale: baby shoes, never worn.” In Alberto Lecchi’s newest movie, The Jar, we see just how romantic—and dramatic, even—these six words can become and in the end ask ourselves: Could Hemingway have done better?

The movie opens in a curious tension as we’re introduced to Juan Perez, played by veteran actor Darío Grandinetti. As the music suggests, there’s a sweetness about this man, Juan. His demeanor, however, suggests not just otherwise but an inability to be socially appropriate; no eye contact and very little talking.

Gene Hackman’s character of Harry Caul in Coppola’s The Conversation comes to mind as we watch Perez for his shy demeanor seems to come from an unnatural place, as if he wasn’t always so quiet but made that way. With Hackman, it was his years of surveillance work and the consequent secrecy rendering him a quiet, guarded man. With Perez, we are lead to suspect his silence, his muted affect, from the deft inclusion of Perez waking up from a bad dream in which we hear the clamor of something that now only lives each night in his dreams. But dreams are of the night. In the light of day, Juan Perez finds himself quieted by something just as forceful: love. And she is called Romina.

Played by Leticia Brédice, Miss Romina Campos is a school teacher in a sleepy little town. In contrast to Perez, Romina exudes all that is absent in Perez: warmth, beauty and voice. When such forces collide, there is a thaw. Out of the mix arises a jar and Perez’s promise to deliver this jar as he drives from town to town in a bus.

Lecchi has a lot of fun with this twist in the plot. Indeed, the twist seems to be more of a wound up rubber band. Scoring care of Julián Vat changes from something whimsical and evoking a James L. Brooks movie to full-on spaghetti western. Antics ensue and when the dust settles, Juan Perez finds himself in a web of lies but situated ever closer to the love of Romina. While this all seems lighthearted, there is very little levity. Even the likes of the stoic Perez would squirm and hide behind the safety of webbed fingers as the scenes pass.

Part of this tension has to do with the film editing. Whether by design or accident, several of the cuts happen so abruptly, one is left wondering if film editor Javier Ruiz Caldera was chuckling to himself when watching the finished product. The movie also suffers from a poorly aligned audio track making the voices of the character hard to distinguish from the scoring. Thankfully, The Jar gains such momentum, any technical issues fade away as we lean forward in our seats to see just how far Perez will go when more than a jar is on the line.