“People either don’t get it or they say, ‘I can’t believe no one else is doing this.’ There’s a lot of people who it just goes straight over their heads, and they can’t process that we’re still not a zine library and that we’re not a bunch of leftist political anarchist crazy kids because they can’t get over the name.”
– Nell Taylor, Founder and Executive Director of the Chicago Underground Library (CUL)

The last time so many people had this much difficulty with a Chicago name, it was with Rod Blagojevich. Jon Stewart used an inhaler and impressive breath control to help him pronounce the name. Unfortunately, phonetics isn’t the problem keeping Nell Taylor up at night. 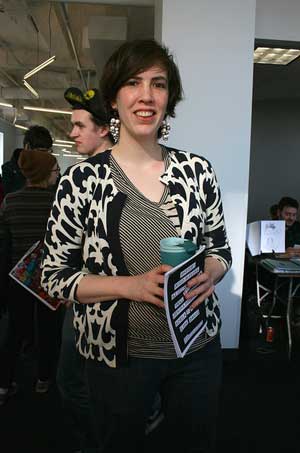 The Chicago Underground Library (CUL) is easy to pronounce. What’s not so easy has more to do with why Jennifer Grey should have left her nose alone, why the Tea Party should have consulted Urban Dictionary and why no matter who owns it, Sears Tower will always be Sears Tower.

A quick Wikipedia search lists scores of companies that once saw fit to change their name. 7-Eleven used to be U-Tote’m. 3-M used to be Minnesota Mining and Manufacturing Company. Changing names is sometimes a necessary growing pain. But Taylor admits that “over the years, we’ve had to spend more time explaining to people what we’re not than being able to tell people what we are.”

Part of the problem might have less to do with the name and more to do with what the CUL is trying to do. After all, when Stravinsky tried to usher in a new type of music with the Rite of Spring, concert-goers rioted. When Chicago’s own Amy Krouse Rosenthal hung actual money from a tree, passersby walked by unaware. The world is arguably changing faster than ever before, and this is usually something we’ve not only become accustomed to, we’ve become obsessed over as we salivate over the next new thing. But sometimes we need a little help with our newest obsessions. The CUL might just need some of this extra help.

Nell Taylor has presented at MIT’s “Media in Transition” conference on two different occasions. She’s also spoken at TED, although that was for an unrelated venture. It’s worth mentioning, however, because it underscores the type of mind behind the Chicago Underground Library with its innocuous name and fancy-schmancy intentions.

Did you get that Harold Bloom? While this could read as the manifesto for another growing American pastime – hoarding – it also reads as the blueprint for something truly revolutionary, that the flyer or the cocktail napkin-poem or the short story or long story or the what-you-think-is-crap novel with paint-by-number illustrations that’s been rejected by EVERYONE including your own mother has finally found a home! 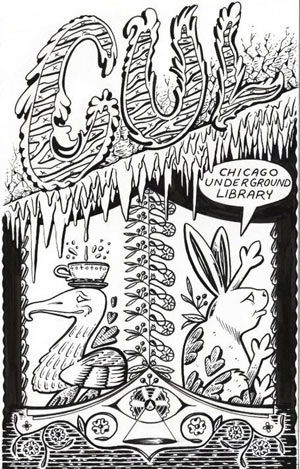 This might seem like a low bar, but there are three non-negotiables: nothing digital, everything from small or independent publishers and everything must be from Chicago or Chicago-related in some way. And so, when two young women drove down from Washington University in St. Louis to submit to the CUL some self-published items from when they were in high school back in Chicago, Taylor gladly accepted them.

“They walked over to the shelf,” Taylor recalls, “and spent a long time looking at the shelf deciding where they wanted to file them, and I swear to G-d – and this was right before the whole space issue was falling apart – I was like, ‘Goddamn library! You’re taking over my life!’ and as they were putting the pieces on the shelf, one girl says to the other, ‘I finally feel like we’re a part of something.’

Taylor pauses and as if the memory was an ablution of renewal, she calmly finishes, “That’s why we exist.”

This idea of belonging has really taken on a stunning irony as the CUL, with all its thousands of cataloged items, moves into is sixth location in five years. Nell even tells of how the CUL was once “operating out of two filing cabinets, and there was only one light on the entire floor [at a previous location]. Meanwhile, PBS’s Roadtrip Nation came to film us there….they couldn’t even get enough light in the room to film.”

But so what? Why is this important and what does Massachusetts Institute of Technology, one of the best schools in the world, the school of Good Will Hunting, see in what Nell Taylor is trying to do? And why should it matter to the average person?

A lot of it has to do with humility. We still don’t yet understand the germ of the next life-saving idea or the intricate twists and turns of social movements for that matter. At least not in ways that involve the paper trail we all leave behind, a paper trail that up until now has often been lost to the trash. “You might think that this neighborhood has nothing to do with another or the poets have nothing to do with the nonfiction writers or this generation has no influence over another generation, but we can show you differently,” explains Nell. No one lives in a vacuum.

Nerding out isn’t the only reason why the CUL should warrant your attention.

“Me and a bunch of other kids ran this poetry slam at our local library the 3rd Friday of every month. We had all these Chicago poets who were mentors to us. Marc Smith from The Green Mill would come up…One night we had 150 kids just show up from out of the blue because it started to get this reputation. That’s how I first started thinking about the library as a community center.”

Nell goes on to explain how the CUL approaches their space – now located at 914 N. California in Humboldt Park – as a place for creativity. They even call it a “workluck,” a word modeled after the more food-intense potlucks. As provincial as this sounds, one can imagine the most famous library to have once existed, the Library of Alexandria, that once functioned in this same sort of communal way. “Putting emphasis on community is what is going to save libraries,” explains Taylor and adding that eventually they’ll put in place a financial model tailored around membership levels including 24-hour access. Orphan Works and Loud Library are other ways the CUL is changing what it means to be a library.

CUL has also taken on a Pop Up Library form as well.

Perhaps it’s appropriate that the Chicago Underground Library started in Chicago, the city known for sausage, a meat that’s happily consumed despite its less-than-desirable manufacture. It’s difficult for folks to find interest in nerdy things like Taylor’s Drupal system that allows search engines like Google to search the CUL’s catalog. What’s much more palatable is that Googling is how people often discover the Chicago Underground Library. We can only imagine if such discoveries are as sweet and momentous as those first precious moments when we happened upon our first sausage.