My girlfriend and I fought over this book.

I was a grad student spending a lot of time at my desk reading and typing, and she, wanting us to work out, stuck by having to talk to the back of my head. It was unfair. Truth is I was putting more time into my writing and school work than on our relationship. I was more a lover of books than just a lover—had my summer reading list figured out before our summer plans. But that’s only the background to our fight. It was “Say Her Name” by Francisco Goldman, the book on top of my summer reading list, that got us in a quarrel. 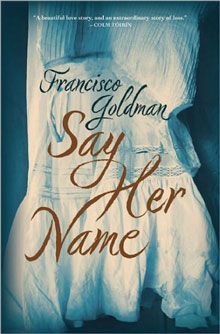 I’d read a short essay by Goldman in Newsweek—part of a series of writers writing about cities they love. Goldman wrote about Mexico City, el D.F. I assumed it’d be about the things I read in our sensationalist news—overcrowding, poverty, crime—but it wasn’t. Goldman wrote about about his wife that recently passed away, and life without her in a city they lived in, a city that held them. One night, walking through el D.F.’s streets Goldman wrote that he thought, “There is the sky that she loved and into which her last breath dissolved, and this is the rain she should be walking home through right now.”

That sentence cut me up, left me bleeding at my desk. It’d been a while since I’d read a writer give himself to the page so honestly. When I discovered that his novel was also about his wife, I bought the book and placed it next to my desk as a motive to finish my semester’s work. On a day when my girlfriend got tired of looking at my hunched back and hearing my laptop keys clicking, she took the book. She layed out on my bed with it, resting on her stomach, her knees bent—looked like she was reading on the beach. She was gasping and stretching out words of excitement, saying, “This is soooo gooood,” and “Ooooh my God.” She even picked out a section to read to me. I turned to her, irked with the research paper that I was writing, and said, “Alright, don’t tell me anymore. I want to read it myself.” I wish I could say she threw the book at me (she probably should have), but it was worse. She closed it and handed it to me—stretched out her thin arms, placed it in my palm, and said, “Here.” She stood quiet for a while, hurt to a point that was making her think clearly. Told me how rude and childish I was. “You need to calm down,” she said. But I did what every other young man in this situation tends to do—I argued back.

That night, after she left, I read the first chapters of the book. Even though I still had work to do, it only felt right that if we fought over it, that I read some of it.

It is confusing to some when I tell them about “Say Her Name.” Francisco Goldman, actually did lose his wife, Aura Estrada, but the book is not a memoir. It is a novel. Although it’s inevitable to question what is real and what is not, Goldman’s time jumping narrative demonstrates just how natural non-fiction fiction is. That is, the very act of remembering the first time he said “Hola” to Aura at a literary event in NYU, to his painful recollection of the ocean wave that killed her in Mexico, is (re)imagination, it is an act of fiction. Goldman as the narrator does this as we would expect anyone who just lost a partner would—he struggles between memories (those with her and those without her). A memory will recall another or painfully remind him that he is without Aura in the present. When thinking of the times when he walked Aura to the subway, he writes, “I still regularly imagine that Aura is beside me on the sidewalk. Sometimes I imagine I’m holding her hand, and walk with my arm held out by my side a little. Nobody is surprised to see people talking to themselves in the street anymore, assuming that they must be speaking into some Bluetooth device. But people do stare when they notice that your eyes are red and wet, your lips twisted into a sobbing grimace.”

The book is largely about Goldman’s grief, but just as much about Aura’s life. The further one gets into the the novel, the more we understand Goldman’s loss. It becomes our own, because it is impossible not to fall in love with Aura, especially when we come to terms that she isn’t just a literary subject. She was flesh and bone, brilliant and adorable in all her humanness. She was a woman who was obsessed with the salamander species, axolotls. So much that on a trip to Paris with Goldman, the first place she insisted they visit was the Jardin des Plantes where they kept axolotls. When she discovered that they no longer had them in the museum she cried. Goldman writes, “Tears, just a few, not a flood, warm salty tears overflowed from Aura’s brimming eyes and slid down her cheeks. Who cries over something like that? I remember thinking…Oú sont les axolotls? She wrote in her notebook. Where are they?” That was Aura at the core, but there was more—an academic critical of academia, a fiction writer with a heart and talent that would gift the world her stories and novels, a daughter loyal to her family despite the conflicts they brought to her life, and a wife who taught Francisco how to give himself completely.

As if it wasn’t difficult enough, after Aura’s death Goldman has to deal with a mother-in-law that was always weary of him. “No one hates Romeo more than Juliet’s mother,” he writes, “That’s the line I was ready to wield were Aura ever to bring up her mother’s hostility to me. But Aura never did, so I never got to use it.” After Aura’s death, her mother’s disapproval of Goldman becomes more apparent. She accuses him, without any reason, of being guilty for Aura’s death. It is this complication, along with the obvious mourning and loneliness of a widower, that stirs up the novel to reach unexpected events and confessions. All are troubling yet fascinating—the way only something rooted in love can be.

I would be lying if I said I didn’t think of my girlfriend while reading this book. That is what this novel does. It makes you think of a person you love and then imagine losing them. Makes you want to call them, or run and see them and apologize for ever hurting them, for ever starting a fight or continuing one.

My girlfriend and I broke up halfway through my reading of this book. We ended things while still in love. Sometimes love between two people can be so strong that it makes it hard to think straight. This book delivers a lesson that I needed, perhaps even one our world needs. Goldman writes, directly speaking to the reader, “Hold her tight, if you have her; hold her tight…that’s my advice to all the living. Breathe her in, put your nose in her hair, breathe her in deeply. Say her name. It will always be her name. Not even death can steal it. Same alive as dead, always. Aura Estrada.”