Los Rakas’ first label release, an eight song EP titled ‘Chancletas y Camisetas Bordada’ (‘Flip Flops & Fly Tank Tops’) is a mixed bag of highs and lows. While it fiercely delivers on the beats and both emcees possess an unquestionably solid lyrical aptitude, some of the lyrics lack artistic import.

For those of you not familiar with this PanaBay duo (a term coined to reflect their bifurcate background: Panama and the Bay area) Los Rakas is Rico, or Raka Rich, and Panama, who also goes by Raka Dun. Their music is a tasteful blend of Afro-Latin-based hip hop with the rhythmic beats of Afro-Latin inspired musical genres, such as plena, Caribbean and reggae dancehall. 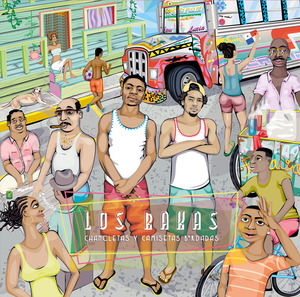 Their first track ‘Vengo de Panama’ (I Come From Panama) is an ode to Panama with beautifully arresting, digitally instrumentalized guitar riffs, with a chorus that declares: “Yo vengo de Panama/I live it/I love it/I’m from it.” Similarly, ‘Camisetas Borda,’ touches upon socio-cultural aspects that often get stereotyped as “ghetto.” A  ‘camiseta bordada,’ for example, is a white under sleeve shirt embroidered with brightly colored yarn at the sleeve and neck holes that is mainly worn by Rakatakas (a word used in reference to people from the working class neighborhoods and where their name Los Rakas comes from). In a recent interview with Time Out-New York, Rich puts things into perspective: “You’re not supposed to wear [camisetas bordadas] because it’s considered gangster stuff. But it’s beautiful. Nobody else in the world do it, so why you tripping?”

I’m certainly not tripping about the lyrics in these two songs or in their trademark, head-bopping number ‘Soy,’ that loops the chorus “Yo si soy/Yo si soy/Yo si soy, Raka” (Yes I am/Yes I am/Yes I am/ Raka). The genius of the thematic thread in these songs is that they parallel what has rapidly become the ‘Soy Raka’ brand: a marketing ploy that is so seductive, in part through its hybrid composite of Latin America’s multi-racial, ethnic and class collisions–who doesn’t want to be a Raka?

Having introduced a mad fusion of Afro-Latin musical diasporic styles, Los Rakas offer an alternative to a mass of [now] monotone reggaeton music. Unfortunately, like the majority of reggaeton music, some of their lyrics remain offensively misogynistic and violent. So much so that I had to listen to their EP single ‘Panty Wanty’ several times to ensure that I did not misunderstand the words. What is being described is a rape scene in an unapologetic tone: “Y ya estoy bien dañao’/y me siento abnormal/creo que la voy ataquar/Y pa’ el bano lleva la/Y ai mismo dale tras, tras, tras/Asi que fui y la ataque/[…]la agarre/mami que le pasa como jode/vamonos pa’ ya/y vas a ver.” In ‘Culea’ Rich raps, “Pasame, pasame la botella/que voy a tirarle a ella.” There are a number of tracks that are interspersed with sexist and violent lyrics that are unacceptable given that they have real-life implications and consequences.

Music born of artistic fervor, migration and transnational acculturation, this Panabayan duo is creating distinctive sounds matched with strong spitting skills. The ‘Soy Raka’ music brand may have positively appropriated specific cultural characteristics, such as the ‘camiseta borda.’ Unfortunately, they remain guilty in perpetuating the sexism and gender-violence that remains problematic in Latin American music. It remains to be seen if they’ll prevail as talented songwriters willing to drop the bravado that accompanies their streetwise swagger, and instead challenge the music industry’s political game with some more mature and conscientious raps. Until then, I cannot buy into the Raka brand.

What follows below is an interview I conducted with Los Rakas on 14 July 2011 before their Clark Street Festival performance: