Since our in studio Q/A with Jacuzzi Boys, the cutest, funnest Florida dudes ever, we’ve been patiently awaiting the release of their second album. Their signature, sun dreams and dazed delirium, hazed psychedelia painted rock ‘n roll that actually sounds like rock. With drifting melodies that harp back to their debut, No Seasons, Jacuzzi Boys’ second full length release, Glazin’ satisfies in all the ways its name implies, although I feel like the boys may have lost the abstract creative play they came full force with in their previous album. Guitarist/vocalist Gabriel Alcala bangs it right and starts to drift into Hunx and his Punks swills, but of course with a hurricane in his pocket. Drummer Diego Monasterios lays a solid frame for every song, and cautiously lets loose demonic rumbles, while bassist Danny Gonzalez keeps Glazin’ on a surfing heavy metal grind. 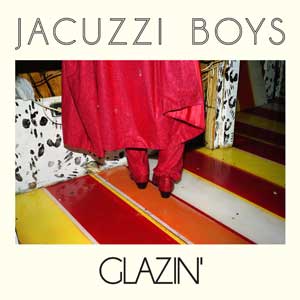 Not to dwell too much on the past, but the charm of No Seasons was Jacuzzi Boys’ intimate imagery and descriptions of listless loneliness, an placated indifference mistaken for longing. But, maybe a good year of concerts on the road and endless throngs of groupies have changed the boys into romantics, poisoned by their own sex appeal into marsh and mush instead of the deviants we haled them for previously. Not as refreshing as the surprising release We Love You So Bad by Kids on a Crime Spree this year, Glazin’ might make third on Gozamos’ best albums of the year list, coming up strong after Golden Glow‘s Tender Is The Night. Glazin’ seems to lack a little of the brazen disregard and decisiveness that their buddies Davilla 666 employ.

With songs like “Automatic Jail,” echoing electrified love, hope and addiction, Jacuzzi sound a little more ephemeral on this album than their more aggressive power-pop punk-metal travels prior. As if they’re steadying their pallet and zoning in on the soft spots, all while remaining singularly South Florida, “Glazin” doesn’t lose its course, staying fixed on a dance crazed 60’s and 70’s acid induction on the beach. Low baselines, softly wind ups behind the candy croon of a pained vocals make title track “Glazin” a wild, up and down, soft yet hard oscillation. I’ve heard this honey suckled kind of song before, with allusions to getting so stoned you can barely function, love seems to drip from this album similarly.

“Cool Vapors” comes back up hard with the Jacuzzi Boys more adored determination and vamped up engine revving roar. The Boys definitely stay cool and collect in their rise to indie infamy, on tracks like “Libras and Zebras” which continue from No Seasons‘ one two, one two rhythm. There’s usually only so many love songs I can take on one album, but it seems like every take these lover boys plant is just an orchid in the swamp waiting to be plucked, prime example, “Crush.” And then Jacuzzi starts singing about walks to the store to get some juice on “Los Angeles,” offering just the kind of lyricism that the world lacks, recognition of the everyday splendors.

“Koo Koo with You” is almost dedicated to me and my girl Cristina, in our 17 year old awkwardness before the world started us, sitting at the Fireside Bowl waiting for our photography teacher’s costume punk band to start, not realizing we’d gotten there way too late and missed the set. In the end it didn’t matter and we just cooed like pigeons for hours making up our own fun. Jacuzzi Boys sophomore album, Glazin’ has its charm, but we’ll wait for their third release to see if they hack it past the inoffensive swamplands and less than mysterious ladies.