Wherever the living can be found, the dead are always near. Chicago is home to a multitude of cemeteries. You may have driven past one, accidentally rode your bike through one, or maybe you got off the train right across from one, not even realizing it until you spotted the headstones. Many men and women who built this world class city of glittering glass and steel remain with us still, resting peacefully in those vast city cemeteries. While some people find cemeteries haunting and frightful locations many do not. Many of Chicago’s cemeteries are not only homes for its residents, but beautiful, sprawling marvels of art and architecture for us, the living.

Many of us enjoy afternoon strolls around Lincoln Park, whether it be for a jog or a quick trip to the zoo. However, many people do not consider an afternoon stroll through a cemetery as a leisure exercise. Well, the truth is, Lincoln Park was once home to a cemetery. From 1843 to 1859 Lincoln Park housed the Chicago City Cemetery. Why this location? Well, it is lovely isn’t it?

Rosehill Cemetery is Chicago’s oldest and largest non-sectarian cemetery at 350 acres. Here, besides the mourners, you will also find joggers taking advantage of the manicured green paths and people with cameras looking for long gone famous Chicagoans. Many people start their visit at Rosehill’s main entrance, a massive gate made of Joliet limestone. Inside, you will find great Gothic mausoleums and tombs, a section of small white headstones of Union soldiers, and impressive sculptures. There is a buck for Leonard Volk and two greyhounds marking the location of the Stein family. Additionally, here you can find former Chicago mayors, Oscar Meyer (yes, of packaged meat fame) and two of our city’s icons – Montgomery Ward and Richard Sears, former catalog and department store giants. 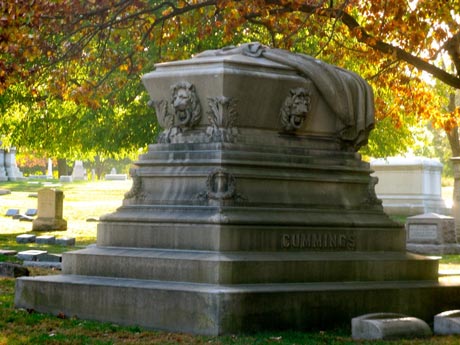 In terms of architecture, Graceland Cemetery is king. Not only is this location home to the final resting spots of men who literally built this city such as Daniel Burnham, Louis Sullivan, Ludwig Mies van der Rhoe, and Fazlur Khan, but it is also home to breathtaking mausoleums.

Author, historian, and founder of Chicago Haunting’s Inc., Ursula Bielski has been intrigued with this cemetery for a long time. “When I was a girl I was astonished by the striking and varied family mausoleums at Graceland Cemetery, near my childhood home: the Getty Tomb, with gates designed by architect Louis Sullivan (also buried at Graceland); the Goodman crypt, whose roof is a terrace which overlooks Lake Willowmere; the towering Pullman monument at the pinnacle of a lakeside embankment; the underground tomb of Ludwig Wolf,” she said.

In addition to numerous individual crypts there are family rooms, including that of The John G. Shedd family, yes of the aquarium. “The Shedd room is the centerpiece of a beautiful sky-lit chapel in the center of the building. The chapel is complete with chairs decorated with marine-inspired ironwork depicting seahorses and shells: tributes to Shedd, who loved the sea and dedicated his namesake Aquarium to the city he loved,” Bielski said.

Other highlights of The Shedd room include a window created by Louis Comfort Tiffany where, at dusk, the setting sun’s rays shine in through the room making the room look as though it was underwater. Unfortunately, no one else will ever be able to commission this as it was a one of a kind piece.

In terms of historical significance Bielski has a slight preference for the oldest cemetery in Cook County, the burial ground of St. James Church at Sag Bridge. “It was founded in the 1830s but had a long history as a sacred site even before this. The Native Americans are said to have used the area as a sacred ground along this ancient Indian Road (Archer Avenue). Even today, burial mounds dot the area just over the existing woods,” she said.

Some of those first buried here were workers who helped create the Illinois and Michigan Canal, an engineering feat. Many of those men were Irish immigrants who sadly perished because of a combination of poor working conditions, starvation and disease.

Regardless of the tragic histories of those who are at rest at these cemeteries, there are, of course, people who lived long, wonderful lives. Immense monuments, gleaming sculptures, and intricate and delicately constructed tombstones help decorate their new homes. So, don’t be afraid to visit them, but do so with respect of course.

“For those truly afraid of death, the old reassurance that ‘death is a part of life’ does not offer much comfort, but it’s true. And just as death is a part of life, so cemeteries are a part of our culture, our history and our city. I would say to please give one of these places a try, perhaps on a beautiful, sunny Sunday afternoon,” concludes Bielski.