Woke Up Black, directed by Mary Morten, is an in-your-face documentary about the uncontrollable woes, and upbringing, of five youths in, and around, Chicago. In order of appearance, Morgan, Carter, Rosales, Sheldon, and Ace dissects—wittingly and with forward feet—the childhood that was handed to them—and on many levels they hand it back for a different future. Rightfully so, these trailblazing gen-Yers express frustrations and quizzical concerns about blanketed Black expectations (e.g. the conundrum of being Black and educated or dualities like being Black and Queer) both inside their families and out in the world. Zealously, these insightful young adults guide us through their vision of life beyond the ‘hood or, on that same token, they stick around to use their lives as positive markers for a community that needs a nudge or two in the right direction. 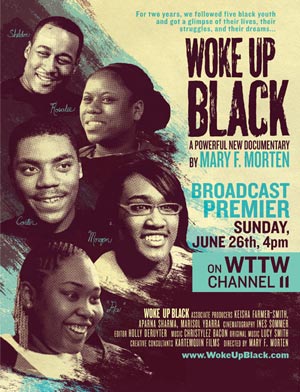 Although the documentary style is a mixture of traditional talking heads and unobtrusive observations, what we are faced with are unique narratives interwoven into cinematic catharsis and tangible growth among the subjects. With an independent feel, Woke Up Black has a clear vision and maturely deals with these familiar themes openly and allows us to examine these burgeoning young lives with propitious anticipation.

Talk a little bit about your work and the types of things you are interested in as a filmmaker?
I am interested in telling stories about people who are marginalized in our society. I believe that a picture is worth a thousand words and film is incredibly effective in getting people to change their minds and hearts about issues and ideas that we have been socialized to be against or to resist.
You deal with various Black identities and backgrounds, class, geography, and even familial structures. When thinking about Blackness in the past 10-20 years versus what’s described in “Woke Up Black,” what’s the same or different?
As much as things have changed, many things have remained the same. I probably identify with Morgan the most in that I was often in an all or close to all white school system in high school through college. I was interested in things that my black friends did not get and was often called outed for not being black enough.

Are you asking audiences to think about what it means to be Black?
No, I’m asking them to understand, among other things, that not having white skin privilege can very clearly impact how you are received and treated in this country.

What spawned the inception of “Woke Up Black?”
I have directed several short films, and I do work in video for my clients in my consulting business but I was looking for an idea for a feature film. Cathy Cohen is a friend of mine and she had completed the black youth project almost 2 years earlier and I thought it would be interesting to bring some real stories about black youth to light, not the 20 second sound bytes we see on the news. Often the information is sensationalized and due to the format cannot really delve into depth about any one being covered. All black youth are not robbing, raping ad pillaging. I’ve been told that the youth in the film are exceptional and that’s why everyone has been so positive about the film. I agree they are exceptional, but not exceptions. There are for more stories like the ones in this film then not. We just do not hear about them.

What does “Woke Up Black” mean?
Woke Up Black comes from the opening montage of the film where several different youth are speaking about black youth and their experiences. Right before the title credit a young man says that he does not do drugs, not involved in a gang, yet, he still has as much problem as his friends who do all those things-as he says: “I guess I just woke up black”. In this country having dark skin is seen as an automatic hindrance to really achieving what some may refer to as the American Dream or anywhere close to it.

Who were your collaborators in the film?
I have 3 associate producers, Aparna Sharma, Marisol Ybarra and Keisha Farmer Smith. Kartemquin Films (Hoop Dreams, New Americans) were my creative consultants. We had a youth advisory panel throughout the production and we reviewed interview questions and footage by teens 14-21 years of age.

What do you want people to get from this film?
I want people to realize that black youth are not monolithic. Let’s not be so quick to judge. When working on issues that effect black youth include them in the discussion. You might be surprised by the incredible ideas and thoughtfulness of these young people. I want black youth to see some positive images of themselves and to know that no matter what your lot in life is–in terms of where you may start–you can do some extraordinary things and people want to support you on this journey.

Woke Up Black can be viewed Sunday, June 26 at 4pm on WTTW, channel 11.
For the schedule of University Tours, sign up for updates at wokeupblack.com and on Facebook.

See the Woke Up Black Trailer on Vimeo