It’s about time. I was getting sick of faux-British indie rockers faking their fish ‘n chip vocals. The most exciting act to come out of Britain since UnkleJam and M.I.A. Golden Glow is the Cure, Joy Division and The Velvet Underground all mixed up in one. Manchester singer/songwriter Pierre Hall is the son of a British-Trinidad and Tobago father and a Mauritian mother, which of course explains his devastating good looks. 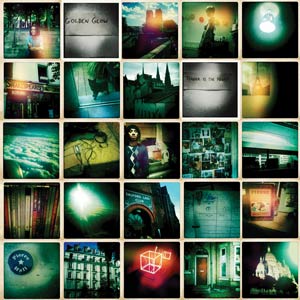 The perfect opener, and dutiful single success, “Adore Me” cracks and warms with Cobain agitation and Morrissey melancholy. I can’t quiet put my fingers on what makes almost every singe track on Tender is the Night, quite so enticing, but “Locked Inside” gives simple chorus and repetitiously instrumented pleasure chords on every one and two replay. Simple drum wind ups, light guitars and flat anguished vocals all cluttered and delightfully distorted promise for “The Cure,” to every indie rock obsessed fan’s waking dreams. Something in Hall’s catchy lyrics reminds me of Oasis and REM with more indie cool. Ice and blistering wind circle the ears on “The Blizzard,” a fuzzed and hazed track that takes you into the depths of the storm, not unlike the same day released, Nat Baldwin baritone hit, “The Snow Speaks.”

I’ve just  found the anthem of my recent exodus from Chicago, “I’m not afraid to be on my own again,”  on the dark and dingy “On My Own.” And where the defiant lone wolf wail of “On My Own” leaves you standing tall, “All Time” sinks your soul back into solitude’s murk. The romantic yet sour “All Time” recalls, Leonard Cohen off-key beauty and vulnerability. It’s the kind of track that makes you wish you weren’t so fearlessly alone. It makes you wish you had somebody to mixtape love for while trying to forget the love you left in a city, a country, a life long gone. Every nerd poet and non-fiction writer will swoon over “Books,” as if Hall couldn’t make our independent coffee shop and used bookstore going lives any more miserable, he sings us through those Myopic and Espresso Royal summers with restless want.

Aggressive and angst ridden, doleful and dissonant Hall echoes hollow and restricted passion on “At a Loss.” The Following “Streetlighter” whispers light 80’s synths hidden behind heavy pop-beat machines and soaring guitars. Quivering vocals recall Neon Indian’s throwback chillwave while playing a more upbeat and 90’s Jef Barbara meets the Jacuzzi Boys sounding melody. “Streetlighter” reminds me of Matias Aguayo’s “Rollerskate,” while “Retreat” is a elegant rap matched against chiming guitars. Not since The Smiths have I heard a singularly pop-punk sound with such precisely languid loveliness. “Start Again” sends you back to that first time you heard “Boy With a Torn in his Side” or “This Charming Man.” Tender is the Night reads like a favorite book, it comforts like a old dog and stays with you, warm in your quiet life, writing reviews, touched by a singer on another continent, whole and secure in your purpose.

Golden Glow – Adore Me by MushRecords

Golden Glow – All Time from Mush Records on Vimeo.

One thought on “Album Review: Golden Glow’s indie-Brit invasions on Tender Is the Night”