While you’re at it, can you also lend me your special edition DVD box set of Firefly, your Cowboy Bebop magna, and your lucky Batman t-shirt? A girl’s gotta be prepared, you know!

The Chicago pop culture phenomenon begins this Friday March 18th and runs through Sunday March 20th. From D.C. to Dolls, it’s all happening at C2E2. Tickets range from $25 (one day online pre-sale pass) to $60 (on-site weekend pass) and are available through C2E2’s website.

Be there or be the laughing stock of your Joss Whedon forum.

By Odin’s Beard!
Australian actor Chris Hemsworth is the guest of honor this year at C2E2 and is the latest movie star to get the Marvel treatment. Hemsworth’s picks up Thor’s epic hammer in this May’s highly anticipated Thor. No stranger to geekdom, he also played George Kirk in JJ Abram’s Star Trek. Shell out $200 for the Chris Hemsworth VIP package which includes a photo opportunity and autograph from the up-and-coming superhero amongst other goodies.

Break Out of the Box
Do you have a permanent eBay alert for Planet of the Apes action figures? Does your display case feature X-Men instead of fine china? Does your vanity know no bounds and you absolutely need an action figure made in your own likeness? Stop by the Methods and Mayhem panel on Sunday from 11:30 to 12:30 where Mattel designers Michael Guarniere and Bill Miekina will give you a crash course in action figures.

The Force is Strong with this One
I have four words for you: light saber stage fighting. Do you really need more explanation? 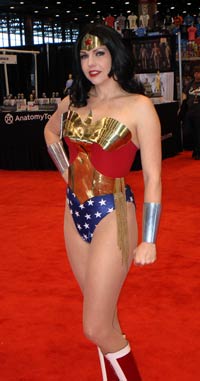 Puppet Master
Stop by the “Beneath the Screens, Behind the Scenes” panel to hear legendary puppeteer Jim Martin dish about his fantastic career with animation historian and ToonSeum director Joe Wos. Emmy award winning director (Sesame Street) Jim Martin has a decades spanning career that left him personally responsible for pulling the strings of celebrated characters including Gary Gnu of the Great Space Coaster, Ben of Puzzle Place and Leonardo in Teenage Mutant Ninja Turtles III.

Welcome to the Dollhouse
She can probably kick your ass, but that only makes you want to make out with her more, doesn’t it? Eliza Dushku, star of Dollhouse, Buffy the Vampire Slayer, and (my personal favorite) True Lies, will be signing autographs Saturday and Sunday.

Dust off your Wonder Woman Boots
Life is so much better with a little cosplay thrown in, isn’t it? Grab a cape or your favorite pair of tight pants and enter one of the daily costume contests happening at C2E2. There are several divisions to cheer for and the Best in Show costume will receive $1,000.

Turn it Up to 11
Channel your inner rock star (only without all that Auto-Tune and with way more groupies wearing t-shirts with puns) at the C2E2 Rock Band Stage. Play all weekend long for bragging rights.

Something to Sink your Teeth Into
The hottest panel at C2E2 features the dead and undead cast of the sexiest show on TV, True Blood. Fangbangers and supes will filled up the audience on Saturday from 3:30 to 4:30 to catch a glimpse of stars Sam Trammell, Kristin Bauer and Brit Morgan.

The Sport of Wizards
Grab a broom a ditch your dress robes: it’s time to play some Quidditch! As crazy and as crazy fun as it sounds, the International Quidditch Association will play two demo games (one on Saturday and one on Sunday). Muggles and wizards are welcome.