It’s Friday night at Aja, and the dinner rush is in full swing. In the stylish, dimly lit dining room, two women are fawning over their dessert: the Aja “Oreo” (white chocolate mousse sandwiched between dark chocolate fudge cookies) paired with a taro bubble tea milkshake and dulce de leche-drizzled mini madelines. Patrons at the bar are busy sipping on signature house cocktails like the blackberry caipirinha and acai mai tai and munching on housemade pan-fried gyoza and firecracker spring rolls while trying to carry audible conversations over the pulsing ambient music.

By comparison, the kitchen is a temple as Executive Chef Ariel Bagadiong examines a lavish platter of maki rolls from the sushi bar before sending it upstairs to the Vertigo Sky Lounge.

“No plate goes to the table without me seeing it first,” Bagadiong says.

One by one, dishes continue to parade through the pass under his watchful eye. There’s the bulgogi-style hangar steak served with tempura sweet potatoes and a spicy cole slaw, hamachi guacamole drizzled with a yuzu-soy vinaigrette and served with taro chips, a clay pot brimming with coconut curry-lime butter mussels and a ridiculous slice of pineapple upside-down cake with dulce de leche ice cream. Kobe sliders, caramelized banana sundaes and even standard-issue BLTs destined for room service somehow materialize from the same kitchen. It’s a cavalcade of smells, colors and flavors and a tremendous amount of responsibility for one kitchen catering to an entire hotel’s requests but one the crew seems to handle with relative ease.

“Where’s my kung pao chicken?” Bagadiong calls out to the line. One of the cooks begins shuffling through his stack of tickets.

“You almost sound like you mean it,” Bagadiong says to Kim as the two continue to joke while cleaning and sending out plates. 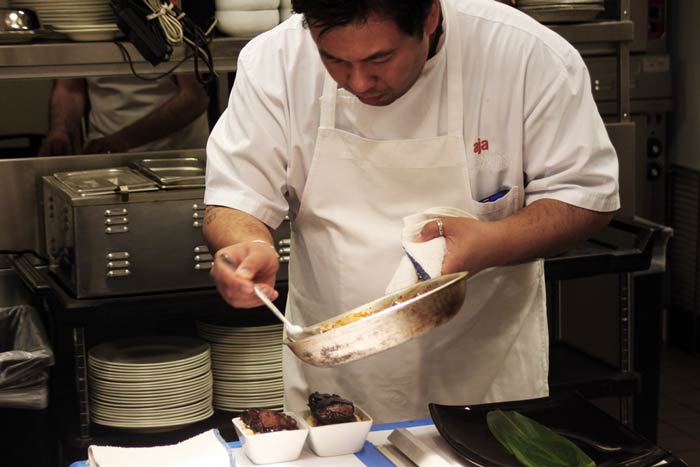 When the award-winning Dana Hotel & Spa in River North first opened in June 2008, the hotel’s restaurant began as Ajasteak, an upscale Asian-inspired steakhouse with a menu based around high-quality cuts of beef like Japanese Kobe, Australian Wagyu and dry-aged American Prime, all butchered in-house by the ounce. Bagadiong was hired as the executive sous chef alongside DC transport Joshua Linton (Oyamel, Zaytinya) who took the helm as executive chef. It was an ambitious restaurant concept for a boutique hotel, especially considering the stiff competition from Chicago’s more storied and popular steakhouses like Gibsons, Morton’s, and Gene & Georgetti. So it was no surprise when the pricey, meat-centric Ajasteak began to unravel during the recession, only to rebrand itself over a year later as Aja, a more casual pan-Asian, tapas-style concept coupled with a bar menu sporting old favorites like Ajasteak’s Kobe burger and signature spicy rock shrimp. It was an inspired decision with respect to diners that accentuated the Dana Hotel’s chic sensibilities, and it seemed as if Aja had finally found its identity.

But when the restaurant’s typically well-updated blog came to a halt around August of last year, it was the same old story again, and in continuing with Aja’s habit of annual shake-ups, Linton suddenly stepped down in October as executive chef, leaving a gaping vacancy in the Aja kitchen. Temporary replacements outsourced through CB5 Restaurant Group by the hotel never quite fit it.

“It was definitely intimidating having [CB5 Restaurant Group] sent in here by management leading the kitchen,” Kim recalls. “There was a big letdown among the crew when Linton left, and it certainly hurt morale for awhile.”

As for Linton’s natural replacement? In another stroke of bad luck for Aja, Bagadiong was no longer with the restaurant and hadn’t been for several months. 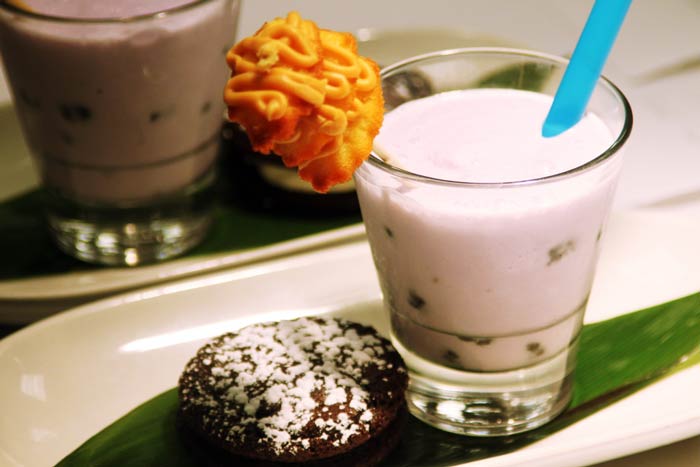 Bagadiong’s interest in food began in the kitchen as his mother’s understudy, entranced by the methodical and sensory experiences that brought food to his family’s table in their San Juan, Batangas home in the Philippines. The early exposure to his native (and oft-maligned) Filipino cuisine served as a catalyst to Bagadiong’s culinary curiosity with a childhood permeated by the bright, assertive flavors of adobo, coconut milk, shrimp paste, amapalaya and kalamansi. The broad spectrum of Chinese, Malay, Spanish and American influences and ubiquitous combination of tamis (sweet), asim (sour), and alat (salty) flavors helped advance Bagadiong’s palate and passion for food as he continued to exert his presence in the kitchen, whether it was experimenting with clay pot rice in his family’s traditional bahay kubo or perfecting cupcakes in Nigeria during his family’s brief tenure there following the 70s oil boom.

One final globetrotting session brought the family to Chicago where, following graduation from Amundsen High School in Ravenswood, Bagadiong decided to enroll in the culinary arts program at Kendall College in Evanston (Kendall moved to its Riverworks campus in 2004). It was an auspicious start to Bagadiong’s professional career and an eye-opening transition.

“In one of my first classes, my instructor started talking about pesto, and I was like, ‘Pesto?’ I didn’t know what pesto was,” Bagadiong recalls. “Everyone else knew, but I had to look it up later.”

It was an early miscue for Bagadiong who, until this point, certainly held a fair advantage over his peers with regards to Asian cuisine but had limited experience with classical French gastronomy. But Bagadiong was undeterred and the want of culinary knowledge merely fueled his motivation to educate himself further, later crossing over into patisserie and baking before committing to a whirlwind tour of the Chicago dining scene. Following an externship at Spiaggia, Bagadiong worked as garde manger at Mango under Executive Chef Steven Chiapetti, executive banquet and pastry chef at the W Hotel, executive pastry chef at Blue Water Grill, and as a chef instructor at The Chopping Block before coming to Aja upon the recommendation of a friend, assisting with the restaurant’s development and opening.

But despite his credentials, one gets the impression that Bagadiong was a man constantly selling himself short, whether it was the pesto incident at Kendall, his hiring at Blue Water Grill (which he insists was a complete surprise), or even working at Aja under Linton, a younger chef with a stronger Mediterranean background than Asian. It seemed an opportune time, then, for Bagadiong to reevaluate his priorities, leaving Aja to help Timothy Canning open Lemon Tree Grocer in Downers Grove and another friend redevelop the historic Glenview House with the prospect of becoming its executive chef.

A couple months later, Linton would resign from Aja forcing the Dana Hotel to begin searching for new candidates to permanently take over the kitchen, but who better to consider than the restaurant’s former executive sous chef? It was a no-brainer for both parties. Here was a position tailor-made for Bagadiong’s background, a chef who had been with Aja since opening day, and a persona that embodies the dynamic creativity the Dana Hotel covets. Calls were made, discussions were had, and at the beginning of February, Bagadiong was officially named the restaurant’s new executive chef.

Things were right again at Aja.

It’s Monday afternoon and the Aja dining room is desolate and flooded with an unflattering level of sunlight. It’s a startling juxtaposition of activity from just a few nights ago. The lone daytime server drops by to ask “Chef” if he needs a coffee refill which “Chef” politely declines. “Chef” shouldn’t even be here. It’s Bagadiong’s day off and time he would probably be spending catching up on reading, playing tennis, or sharking cueheads at Chris’s Billiards. Instead, he’s gearing up for a (sold out) Gilt City promotion where Aja is offering a “Three Course Korean Chef’s Tasting” and overseeing preparations by his sous chefs. It’s a testament to Bagadiong’s dedication to his job. Being a chef is clearly a significant identifying factor and after nearly 16 years in the industry, it’s a career that has shaped Bagadiong’s fundamental philosophies in and out of the kitchen.

“Every job I’ve had has helped me learn something new. At Mango, it was testing my culinary boundaries. At the W, it was adapting to high-volume situations. At Blue Water, it was learning to create a complete dish. Everything from the past has helped me get to where I am today.”

It’s an enduring and deliberate approach for a chef whose belief in experience is also channeled into personal standards of accountability. During a recent Le Cordon Bleu Chicago job fair, Bagadiong says he was surprised and disappointed by the apparent lack of professionalism in students during brief interviews.

“Pride and ego are the biggest deterrents in a chef’s growth,” Bagadiong says. “A lot of students are coming out of culinary school thinking they already know everything. But now you don’t have two hours to make a genoise. You only have ten minutes, and you have to make it happen. Some people get it, but most of the time, the mindset doesn’t translate.”

As for Aja, Bagadiong’s first major task as executive chef arrives with spring and creating a more refined menu that continues to reflect his penchant for bold Asian flavors and emphasis on seasonality and sustainability. When asked how he’s been dealing with the transition thus far, Bagadiong merely sighs and smiles.

“I’m supposed to stay three months ahead of schedule so it’s definitely been challenging not to fall behind. It’s tough, but it’s OK because, at the end of the day, I enjoy what I do.”

One thought on “Reviewed Food: Aja”