Promoting the recent release of Summer Friends, Deepak Mantena the master mind behind the punk-pop project, Junk Culture is coming to Chicago to perform two sets this weekend. Raised on old Indian songs, on the road and mostly in Oxford, Mississippi, the soft sounds of a small town allowed him the creative leg room to experiment and grow as an artist. With the Internet at his finger tips, Deepak proves that a homegrown sound most definitely can defeat any  deafening, high-density urban rumble. 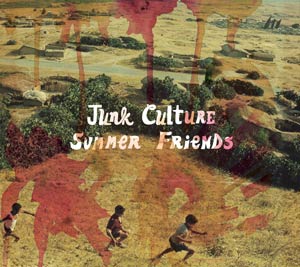 Gozamos: What were some of your earliest memories of music?
Deepak Mantena: I only first started really listening to music on family road trips. My parents would always pop in the same cassettes of old Indian songs. And they’d really get played out. It wasn’t my choice or anything but I didn’t mind because at that point in my life I wasn’t the type of kid that would just lay in my bed listening to Soundgarden or whatever. I don’t know any of the names of the jams but if I heard them again I’d probably be able to sing along.

Where are you from? Where’s your family from?
DM: I was born in Idaho, moved around a ton, but have spent most of my life in Oxford, Mississippi which is what feels most like home. My parents were born in India. I just got back from a month long trip to India a little while back. It changed my world a little because it was the first time I got to see the country as an adult.

How do you believe where your from, however you define that, has influenced your music?
DM: Making music in my hometown of Oxford is awesome for me because it’s a slow town with lots of space. People are mostly supportive of the arts down here too so it’s pretty easy to work on projects. Oxford influences my work a ton I’m sure, but so does the Internet. Oxford maybe isn’t as modernly relevant as New York or anything like that, but with the Internet it doesn’t matter.

What do you believe the role of art and music is in today’s society?
DM: That a tough question. Especially because art and music don’t exist as singular things, but are pervasive and interconnected through different mediums. Let me think on it for a few years.

Did you study music formally?
DM: No, I studied computer science. I never got to be in school band when I was a kid because we moved to a new place during the first year of band classes.

What do you think of recent trends in the global indie scene?
DM: There are so many crazy things going on with independent music right now that it’s hard to know what’s going to stick and what isn’t. It’s pretty thrilling for sure that people are working on so much stuff.

Who are some of your secret artistic crushes? What other arts influence your work?
DM: It’s not a secret or anything but I’ve been getting into James Pants. Welcome and Seven Seals blow my mind. Das Racist’s mixtapes are dope. I’m definitely influenced heavily by visual media. Serialized television, films, photos, and experimental videos emotionally resonate with me pretty intensely.