The upcoming movie Battle: Los Angeles—directed by Jonathan Liebesman—seems like the next big to-do (or see) in Hollywood Cinema. It has all the right ingredients: a stellar director, a star cast, special effects, an edgy cinematographic style, and the key component: a budget for heavy promotional materials. Check any website, bus stop or technological guerrilla-style ad (yeah, those invasive ones you have to click to exit) and you’ll quickly realize—like the next elusive doomsday or invasion movie advertisement, you’ll have to see the film to actually know what the battle’s about.

Kenyan-raised actor Adetokumboh M’Cormack (Lost, Blood Diamonds and 24) candidly discusses his role in the film as a navy corpsman transplant in the marines, how Battle:LA breaks Hollywood’s standard on people of colors’ longevity in a story and breaking out of the box of Blackness—being both African and African-American.

Gozamos: Hello. How are things going after working on the film?
AM: Things are going well. I’m enjoying being in the moment and waiting for the release of the film so things are going really good.

That’s great. Talk a bit about Battle: Los Angeles. What’s the premise of the movie?
AM: Well the premise of the movie is a war movie with aliens. You have the whole movie being shot from the perspective of one Marine platoon who are, basically, Los Angeles’ last line of defense against this invasion. It’s epic. It’s huge. It’s startling realistic in the sense that it’s almost shot documentary style; you just follow the one group. You don’t cut to the White House or some other random place in the world, you  really follow this one group. It’s just really gritty. It’s heartfelt. It’s real and it’s just really different from anything we’ve seen so far.

What other movies would you compare it too?
AM: I would say it’s most like Black Hawk Down except the enemy is, of course aliens. It has elements of Saving Private Ryan in it. I would say it has a bit of Hurt Locker as well.

In the past a lot of sci-fi films have dealt with the idea of doomsday and alien invasions, what exactly makes this one any different?
AM: The fact that it’s hand-to-hand combat. It’s urban combat. You actually get to see these Marines fighting with this enemy. You also get to see that the aliens—in regards to the armies—are similar to our military. They have lieutenants; they have corporals and medics.

So a different type of personification of an alien species?
AM: Yes it’s very similar. It’s very real and it doesn’t feel like this abstract random thing. It feels like a real fight here on earth.

Do you have any views about life on other planets?
AM: [Laughs] You know what’s funny? After doing this film I had to do more research about if there is life on other planets and other existence; you know it very well may be true. I think there may be other life forms, and we are not alone—I don’t think we are alone at all. It is a possibility.

Since you’re a bit of an expert on this now, how should one prepare for a potential alien attack on earth?
AM: [Laughs] Oh, I don’t know. I honestly don’t know and I wouldn’t call myself an expert either. What we did in the film was rely on our training. We spent three weeks prior to filming in boot camp where we learned to use M-4s, M-16s, assemble, dissemble, weaponry, shoot, 50-[Calibers]; we learned what it was like for Marines—not really be Marines—and just a glimpse into their world and what I realized is—no matter what the enemy is—they rely on their training and their background in order to fight the enemy. I think we have to trust that our military is trained to fight the enemy even if they’ve never fought the enemy before. 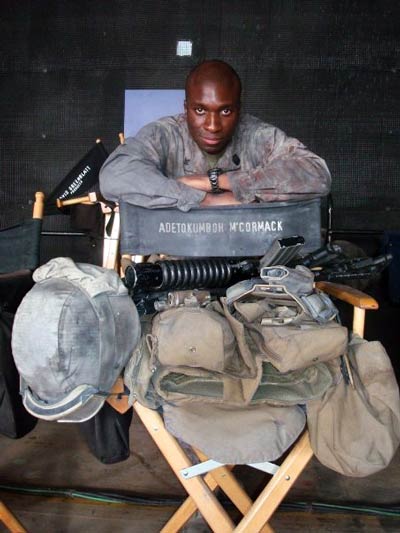 I want to ask—continuing the conversation about specifics in this film–“they say” Black people often die first in Hollywood films [Laughs]. Is this film any different in that regard? Does this film break those so-called standards?
AM: [Laughs continue] Well I can’t give too much away obviously but the refreshing difference is that ethnic groups are strongly represented in this film. You have the Latinos—Ramon Rodriguez and Michelle Rodriguez are both in the film. You have Black representation with Ne-Yo, Corey Hardrict, Neil Brown Jr., and also myself—you have a few of the Caucasian characters as well. We are really well represented in the film and you’ll be pleasantly surprised to see who makes it and who doesn’t. I think we keep people guessing throughout the entire film.

Describe your character’s particular role in the arc of this film.
AM: Well the thing about the marines is that they don’t really have medics so they enlist a navy corpsman—so I’m from the navy—to go along with them into battle. My character has been with these marines before, fighting alongside them, so my character comes and helps the wounded or sends them back if they are too hurt. Eventually everything just completely falls apart when the aliens species come and I end up not just being a medic but being called into battle.

What physically, mentally, or otherwise did you have to do to prepare for this role?
AM: It was a lot of research. Every one of our characters had to do a lot of research. Three weeks prior to filming we went to boot camp where we all slept in a tent and woke up at five in the morning. We had to run two and a half miles, do hundreds of situps and pushups and jumping jacks and what not; we had to get ourselves physically like marines but we also had to get to the mindset of marines like speaking the same terminology as marines. A lot of it was very very arduous and it was really physically demanding but I got in the best shape of my life. However, people got broken hands, I suffered a concussion, people chipped their teeth. Out of all of the lead characters most of us had to be hospitalized at some point. But at the end of the day we loved it and hope we portrayed the military in an accurate way.

Did you have any inspirations for the role?
AM: I used several people actually. I spoke to actual navy corpsmen and asked specific questions about what I would do in certain situations. The script changed quite a bit because the director wanted some things to look more realistic so I would  have to ask how my character would respond in those situations. I also read tons of books and talked to doctors as well.

What was it like working with director Johnathan Liebsman?
AM: Johnathan Liebsman is an absolute genius. I had a blast working with him and it was interesting because he tried to paint a picture initially and we didn’t really get it until he showed us a presentation with exactly what he wanted. Then we got it; after that we decided to trust his vision and I’m glad we did. I think that it is very realistic and very entertaining.

What is it like being Black, in general, in Hollywood but also being from another country—being African? What is it like engaging this mega-business with all of your identity layers?

AM: It’s interesting, it’s actually really interesting. I think that I definitely share the African American experience being the fact that I am Black but it’s always interesting because I am also very much an African. When people meet me—before I open my mouth—people often assume I am African American. At the end of the day I guess I actually am when you think about the true definition of an African American. I wouldn’t say there are any major differences because my life in Kenya wasn’t very different. I lived in the capital, Nairobi. I had friends from all over the world, so for me coming here there were no major differences in my lifestyle so to speak.

On that same point do you feel like you have a more wealth of roles because you can confidently play someone who is from Africa and play someone who is an American born African or African American?
AM: Yes I can do both, but what’s interesting is that I feel like a lot of people are so intimidated because my name is so African. They wonder: can he really pull off an African American role? Of course I can, it’s just I have this long intimidating first name. As an actor I wouldn’t say there are more roles available to me but  I like to do it all.

How do you feel about the way Africa is depicted, at times, in films? For example, we often hear about ,or see, Africa as one culture and we see a continuous pan-African identity. Do you feel like you have a responsibility to point out the vastness of Africa?
AM: Absolutely. You know I think my biggest issue is when I say I am from Sierra Leone—well I have a friend who I told I was from Sierra Leone and he said wait a minute that’s a country? I thought that was a poor girl who had her arms amputated in that Kanye West video. [Laughs] I think there has got to be awareness that Africa is a continent that is comprised of lots of different countries with unique cultures. I think it helps that your President is from Kenya. I think that raises a little bit more awareness that Africa isn’t just one “dark” continent.

What’s up for you after Battle: Los Angles?
AM: I think I’m taking a more film path—not that I’m abandoning TV—I’m producing a project I wrote and I’m looking at some scripts and a film that I co-produced that I will also star in that we plan to shoot in Africa.