March 8 is International Women’s Day (IWD), a day of observance that began over a century ago during the women’s rights movement of the early 1900s. Since the 1970s, the United Nations has sponsored this day and coordinated events around the world to celebrate women and raise awareness on women’s issues. IWD precedes the adoption of National Women’s History Month, which the U.S. only recently began observing in the late 1980s.

While designated days to raise awareness are typically not my style, I’ve embraced Women’s History Month and International Women’s Day as times to emphasize what we should be concerned with year-round–and there’s plenty when it comes to women’s issues. 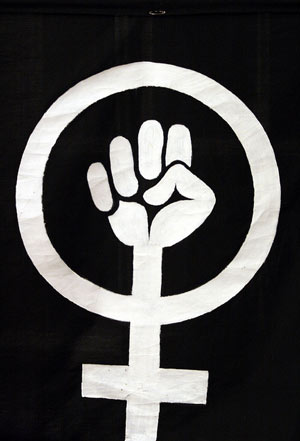 The war on women’s health care is getting progressively worse. Over 1,000 women, including a growing number of female activists, have lost their lives to the rampant femicide in Juarez, Mexico, and now 127 women in Guatemala have been murdered so far in 2011. Women have made great advancements in attending and graduating from college, yet still only make 77 cents to every dollar a man makes. Latinas have an alarmingly high high-school drop-out rate, and 53% of Latinas will become pregnant before they hit 20. And that’s just a brief snapshot.

If you think those stats look dismal, you’ve seen nothing yet.

But before I go there, let me confess that being a queer Latina woman with poor-ass immigrant parents, I thought I was far enough away from any majority grouping that would classify me as “privileged.” Sure I scoff at femininity and lipstick lesbianism as buying into societal notions of female beauty, but the truth is I can totally pass as a frumpy-looking straight girl. That’s a privilege, right? But one privilege I hadn’t thought about until someone rightfully called me out is the lifelong privileges I’ve had as a cis woman, compared to a transgender woman. Cis women are women “whose right to claim their female sex is unquestioned.”

Some examples: Women can be harassed just walking down the street, but I don’t have to go through a daily battle of constant verbal and physical harassment for challenging people’s archaic notions of gender. There’s a glass ceiling in the workplace, but I can at least get a job. Not all of my family might embrace my lesbian lifestyle, but the majority still talk to me. It can get a little awkward when I need to explain to a new gyne why I don’t need birth control (“I don’t need it.” Why? “It’s not my lifestyle.” Why? “I sleep with women.” Silence.). Still, I and women like me don’t avoid going to the doctor because of the likelihood of being discriminated against or kicked out of a doctor’s office.

While the “T” has been added to “LGBT” and women’s organizations claim to support all women, transgender women are ostracized on a daily basis in society and even in communities that are supposed to be the most progressive. Mainstream gay and lesbian organizations sacrifice the “T” in political battles with the mainstream. As a human race, we haven’t come far when it comes to equal rights for transgender women.

The facts are incredibly alarming, but I hope they will inspire us all to work towards equal rights for all women and automatically include transgender women when thinking about women’s issues. On International Women’s Day, I’m taking the first steps towards that by educating myself and following the plan below.

How will you be honoring all women on this day?