The gastropub has officially invaded the city of Chicago. The center of many contentious foodie debates, opinions regarding the gastropub range from begrudging acceptance to absolute disdain. It’s a sore subject, to say the least, and it’s difficult to argue against the criticism.

When The Gage opened back in 2007, the city got its first taste of a concept that prided itself in conflicting standards; a glorified bar and grill where “refined rusticity” and “upscale comfort food” could finally be enjoyed in an authentic setting across from picturesque Millennium Park. But despite its seeming hypocrisy, the gastropub makes perfect sense in Chicago. As a city raised on beer, brats, and Midwestern ideals, it’s not a stretch to believe its culinary palate would someday mature to appreciate microbrews, bangers, and English colloquialisms. 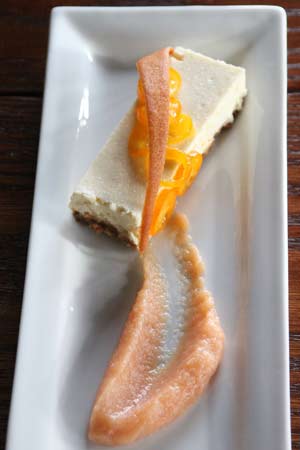 Opening this past August, Owen & Engine stands as an ode to owner Bo Fowler’s nephew (“Owen”) and traditional draft handpumps (“engines”), and serves as the latest incarnation of the Chicago gastropub (and ampersand) movement adorned in the familiar dark woods, amber lighting, and vintage decor one expects from a typical public house (aside from the sadly out-of-place flat panel TVs).

Chef de cuisine Charles Burkhardt churns out hearty English fare like bubble & squeak, a “Sunday supper”-inspired Slagel Farms roasted half chicken, and a monstrous order of fish & chips (notably prepared with haddock flown in fresh daily from New England waters) complete with mushy peas that rival anything coming out of Dirk Flanigan‘s kitchen. It’s admirable and substantial cooking, if not unremarkable and surprisingly pricey for English “pub grub,” which is fine. Outside of a more than competent Euro-heavy beer list and a beautifully Victorian upstairs lounge, Owen & Engine doesn’t seem intent on reinventing the wheel, only maintaining the quality of its cuisine. Few gastropubs in Chicago, thus far, have actually succeeded with the formula (controversial Michelin star-recipient Longman & Eagle) whereas the vast majority fail miserably (Wilde). Whether diners react positively to Owen & Engine’s mantra is a different story.

“There were only two conditions when I got hired: Keep it rustic and keep it English,” Chiang says.

A Champaign native and graduate from the University of Illinois Urbana-Champaign with a degree in microbiology, Chiang spurned the realm of research labs to pursue a career in the culinary arts.

“I could bake a cake and instantly make people happy,” Chiang explains. “You don’t exactly get the same reaction culturing tissue samples in petri dishes.”

Despite her parents’ initial resistance – “They still ask if I’m considering grad school” – they finally gave in under the condition that Chiang attend the best culinary school in the country: The Culinary Institute of America.

“Culinary school was a great experience and something I felt was completely necessary for me. Pastry work requires so much specific technique, and it’s not something you can just pick up and hone over time. And without [culinary school], I wouldn’t have realized how much I hated cake decorating!”

Following an externship at New York City’s Aquavit alongside Carina Ahlin and a year-long stint at Michael White’s Alto, Chiang came to Chicago to lead baking production at e.leaven and later returned to fine dining at Epic.

Yet, despite her success, Chiang’s career hasn’t been without frustration. “During my time at Epic, I really started to doubt my decision to be a chef in the first place. I’d worked in all these fine dining restaurants, and I hated plated desserts. Plus, all the kitchen staff would ever want to do at the end of the night was drink and snort coke. I was never comfortable with that lifestyle.”

For that matter, Chiang nearly didn’t make it into the Owen & Engine’s kitchen. Following her departure from Epic and after applying to the restaurant’s Craigslist ad, Chiang began to reconsider her parents’ desire for her to attend graduate school. Fortunately, her vigilance prevailed and after receiving a callback nearly two months later, Chiang was named pastry chef at Owen & Engine when it opened with full rein over pastry development and bread production.  It marked a return to what she had grown to love during her time at e.leaven and served as a fitting compromise of culinary and personal ideals.

“I love it here,” Crystal says, “I’m looking forward to the end of winter and finally working with fresh Spring produce.”