Proverbs emerge from language like soot emerges from air. “Home is where the heart is,” an English proverb embroidered and framed in so many homes everywhere, is one of these proverbs. After a tour of “the Studio,” as Oak Parkers casually refer, this proverb grows controversial if for reasons of limitation: For Wright, a home involved much more than just heart. For Wright, home was itself an icon in the oldest sense, a gateway fashioned of roof and wall and light through which one would experience the divine itself.

“As you can see,” shouted Stacey, “the front of the house isn’t typical of Chicago architecture.” Most of our tour group smiled at our tour guide’s colossal understatement. She too was smiling from what could be a little bit of joy; the guides for the Home and Studio are all volunteers. 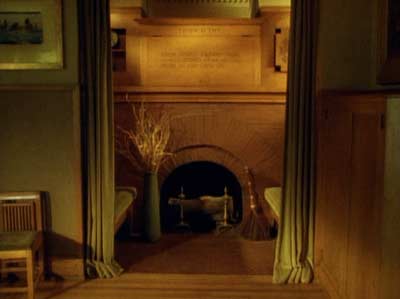 Nothing closer than a slow drive-by of the building is necessary to notice the still atypical style Stacey was referencing. Not just earth tones but nothing but earth tones, not just occasional out-of-the-ordinary wall height but very little that’s ordinary compels the jaw to drop. Indeed, the Wright Home and Studio puts one at unease in a most peculiar way. It’s as if one were being introduced to a stranger’s worn out clothing that fits you better than anything you’ve ever owned, clothing that fits you as if you’ve been wearing it all your life, if only you were so fortunate.

“Above the fireplace are some words,” Stacey shouts. We’ve all been reading the words since we first walked through the entrance, the strangeness of a quote carved into a wooden plaque above a fireplace in a small seating nook in a private home too much for anyone to not read and re-read again:

“Truth is life. Good friend, around these hearth stones speak no evil word of any creature.”

One of the common denominators of the tour group has to do with experience living in a house. Such shared experience almost certainly does not include messages delivered care of a quote carved in wood placed for all to see. Again, the unfamiliar abutting the familiar. We move on, careful to mumble no insult or joke for fear of violating such words. 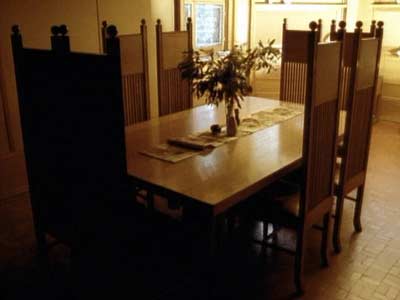 Drawing our attention now to a corridor, Stacey explains, “Mr. Wright changed the depth value of the landings by adding those vertical slats at different heights. So, again, adding interest to what could have been a long, narrow, boring hallway.” The effect was stunning in that we were truly stunned.

Moments later we experienced a similar but more grandiose theatric when approaching the children’s playroom. Stacy was shouting now as if to make sure no one would miss her explanation for the most dramatic passageway yet.

“You’ll notice the narrow corridor with arched ceiling – He did this intentionally so you’d feel a little closed in so by the time you get to the end of the corridor when the room opens up. It’s absolutely incredibly beautiful,” she exclaimed. And it was. We were all silent for a moment and then ebullient as our minds played out fictitious renderings of children actually playing in this room. Some people laughed aloud. But there was always a pall over everything for this house is a rescued house.

And so begins an eerie sidebar of realization alluded to over and over again on the tour, that this house we we’re all touring, was not only forgotten about but covered up and sectioned off into smaller units. There are many ideas out there about the haunting of a place. One wonders, then, about the butchering of home, an architect’s first home. Can this violence be undone?

Tours are often overwhelming because even though you pay for them thereby entering into a contract to step into the classroom, you are also entering a place that’s very unnatural. We are not used to noticing every little detail. We are not used to examining everything for its purpose. For Wright, everything’s purpose had more to do with artfulness than function although the either/or duality was handily usurped by Wright most of the time with both demands being met. Yes, there are leaky roofs and uncomfortable furniture, but Wright is also known for feats of architectural engineering. Perhaps this is where his ego’s fury found its purpose, that it was humbled by the challenge for form, function, and aesthetic. To tour the Home and Studio is to experience on a most intimate level this battle – perhaps as intimate as it gets – Frank Lloyd Wright’s space as he first wanted it and then changed it over and over.

No tour can cover all the complexity of who Frank Lloyd Wright was and what exactly he did to garner the classification “genius.” But the very nature of going into someone’s private house, but not just someone’s house but an architect’s house and not just an architect’s house but their first house makes out of a tour something much more approachable. It is in this way that we laypeople, we mere mortals, can best succumb to the reality that was so readily available to Wright, that there can be so much more to a home than heart.

One thought on “More Than Where the Heart Is: Frank Lloyd Wright Home and Studio”