If you’ve been hiding under a rock and don’t know who Alex Cuba is thus far, let me be the first to fill you in on this Grammy-nominated singer. The Cuban-born Canadian artist has emerged over the last couple of years as the epitome of indie rock. The self-produced, strictly independent, smooth-toned singer has made a solid impact on the music world, not only with his unavoidable afro, but with a style of music he refuses to label, something that he leaves up to his listener. With the chance to hear it directly from Cuba himself, I took the chance to ask him about the emotional rollercoaster ride he’s been on for the last year, his open-door policy on English lyrics and the opportunity to go home with a Grammy. 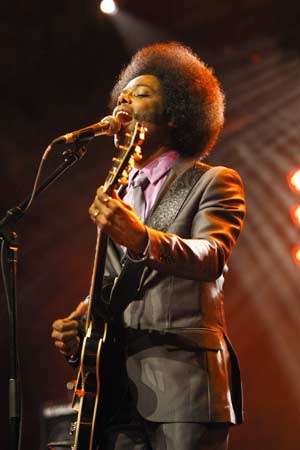 Gozamos: From the Latin Grammys to NPR [Top 10 Latin Alternative Albums of 2010], and now the mainstream Grammys, how have you reacted to all of this? Has it been an emotional ride for you?
Alex Cuba:  This time of awards and recognition has been quite strange for me, maybe because I was somehow expecting popularity before recognition but I guess this is they way life wanted to happen.

With your last album, you said you felt very comfortable in your own skin and that you have arrived. What is your new music sounding like? How has it evolved?
AC: My new music is sounding pretty much like Alex Cuba these days, that is what I am very excited about. Today more than ever I feel the freedom in creativity to its highest.

You’ve worked with Nelly Furtado and Jason Mraz. Is there anyone else that you care to mention? What does that mean to you as a Cuban-born Canadian artist?
AC: Yes, I’ve worked with Ron Sexsmith, Corinne Bailey Rae and Jim Cuddy of Blue Rodeo as well, and they’ve been all wonderful experiences. I am working right now with two giants of Latin music, Luis Enrique and Noel Schajris and their projects are both looking very promising for next year. This gives me the feeling that maybe I have no limits in music in terms of genres and cultures.

Since you are a great example of Latino fusion, where do you see Latin fusion going in the future? Would you say it’s the future of Latin music or is it still too underground?
AC:  Well, I prefer to see my music far away from what most people understand as fusion in music. I don’t fuse genres, I create them. In that sense, I believe we stand a chance to be part of what could be seen as the future of Latin music.

Besides your smooth-Latin-jazz sound, what other sounds or genres have you experimented with in your music?
AC: It’s very interesting that you are calling my music smooth-Latin-jazz. At the Latin Grammys I was nominated for Best New Artist (which I won) and Best Male Vocal Pop Album as opposed to Latin Jazz. This is why we believe we are doing something new and unique, because it is hard sometimes to give it a name. I don’t define myself in any specific genre—to me music is only one, and as songs come to me I write them and record them, leaving the “what genre is that?” for the fans to find out.

What happens if you win this Grammy for Best Latin Pop Album? What do you hope will come with it and where will it move you from there?
AC: We are doing things proudly independent, and that also means that our mentality is very grounded. If I win this Grammy I don’t think much will change, it will only increase my commitment to music. Of course I also hope it will help more people get to know my music.

Do you have any funny stories about your hair?
AC: Yes, early this year we went to Istanbul, Turkey and my hair was a big sensation over there. People would not let me walk on the street without talking to me and calling me names like Michael Jackson, Eddie Murphy, Jimmy Hendrix and even Elvis Presley. It was funny and a little annoying at the same time.

What’s your best memory from all of this so far? What’s your number one accomplishment?
AC:  Not sure yet about my number one memory and I don’t really know why, but I will tell you that our biggest accomplishment has been so far to win Best New Artist at the 11th Annual Latin Grammy awards. I don’t think this award has been won by an independent (or in my case self-released ) artist before or any Cuban artist before, and sure enough I am the first Canadian to ever win a Latin Grammy. Also of course to be nominated for a mainstream Grammy in such a category is a big accomplishment, too.

Where do you pull your inspiration from when it comes to your lyrics? What about your sound?
AC:  Directly from my heart, and from the way I live my life, I guess, which is very simple. That goes for both.

What kind of advice would you give to any young musician starting from nothing?
AC:  Don’t think music is only the kind you hear on the radio or in the movies. Go see live performances and buy the CD directly from the artist if you like what you hear. You should only make music if your heart is telling you to do so and of course if you feel you have the talent to do it. But always remember the reason why you want to do music. That will give you the courage and strength you’ll need to carry it through in hard times and maybe you are finding it hard to become that rock star you wanted to be one day even though you thought it would be easy.