We agree to meet up inside of Myopic Books.

It’s a windy Chicago day and Amy Creyer has ducked inside the cozy bookstore to take a break from the cold. I walk inside and, as the shop girl asks me if she can help with anything, a huge voice appears: “Darling, over here! Hello!”

It’s Amy and she’s wearing an amazing white coat that’s equal parts Jim Henson and Janis Joplin. As we cross the street to begin our journey, she is noticeably cheerful and a bit cheeky. In an almost verbal wink she says, “I just walk up and down Milwaukee. So you’ll get your exercise.” I’m wearing 2 inch platforms, a choice that I immediately begin to regret.

I inquire where her love for fashion began and, like most, it began at a very early age. “I lived in Greenwich Village when I was really little. I lived in New York until I was about six and just living in an environment where there was like so much going on, [even then] you could see it and the way that people chose to express themselves, you know?” It was a realization that stayed with her, even as she moved from the rambunctious savoir-faire of the Village to the quirky-yet-quieter college town of Fayetteville, Arkansas. “Even after I moved to Arkansas, I never lost that love of individuality and [this] extremism in self expression.” Having lived in “the Ann Arbor of the South” as she puts it, Amy found herself in Chicago, a city that embraces individuality, her favorite trait. The individuality that she holds dear is present in every one of the subjects featured on her blog, Chicago Street Style.

“Sometimes, I just take a beautiful picture and sometimes people say to me, ‘Oh, that isn’t very fashionable’ or, ‘That isn’t very cool’, [but] if you look closely, it’s a beautiful picture. I have a photo on my website of a woman walking her dog and the leash is wrapped around her and she’s wearing this gorgeous red coat [and I’m like] look at the photo! It’s a gorgeous photo.” I recounted that tired old adage; you know, the one about the clothes making the (wo)man and if the personality of a person can make or break an outfit. She agreed, but added that one must draw the line somewhere. “I mean, I do have a couple [of] deal breakers. I won’t take pictures of girls wearing Ugg boots or Hunter boots, so I do have my limits.” 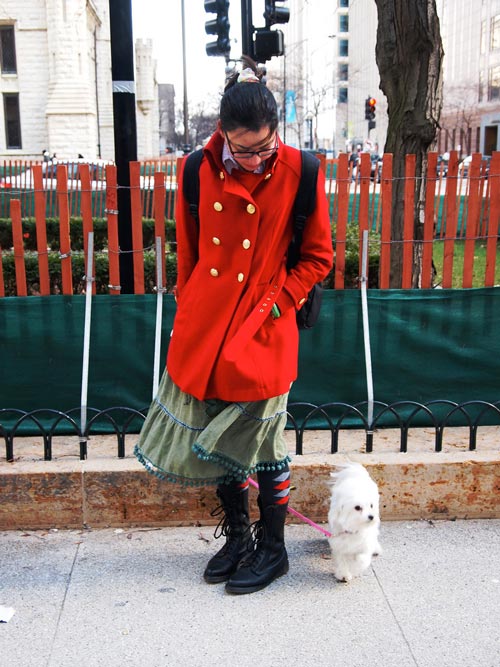 Let‘s face it: though it must be tricky to get certain people to agree to getting their picture taken, it does appeal to a certain type. “It’s almost like a magnetism that draws me to somebody and I’ve really learned to go with my instincts. [Now] I rarely get rejected because I can really tell if somebody’s, you know-” as she grasps for her words.

“Right!” She excitedly agrees. “And if there is something pulling me to them, [that sort of energy that’s going on], I can sort of sense it a lot better now. It’s just a practice thing and it’s learning to read people, too.”

I then moved the conversation onto her own personal style and her answer is classic Creyer. “I would say ‘volatile’ because I like to go from one extreme to the other. Some days, I’ll just be very banal in J.Crew, head to toe and other days it’s [all] vintage. . . It really just depends on my mood. That’s the great thing about fashion. . . every day you’re allowed to invent yourself anew.”

I’m struggling to walk and record at the same time, but eager to hear the next perfect statement that Amy will give me. She quickens her pace and I move fast to keep up and ask her to tell me what separates her from other style blogs. “We all have different eyes. I really think that that’s the only thing I can say that sets us apart. Each of us is drawn to something different, you know? We’re all different people and we all have different taste and we’re all walking around different areas. I think that’s the great thing about street style blogs. There isn’t just one. I mean, it’s sort of seeing the world through somebody’s eyes.[…] I‘m a huge fan of Isa’s and I‘m a huge fan of Scott Schuman’s”

She begins to talk about the Internet and it’s distinct role on fashion: what it’s place is and how it’s changing. “I think it brings a lot more democracy to fashion. You have, like a 14 year old in Oak Park, Tavi Gevinson, who is basically this fashion superstar now. That would never have happened [without the Internet] and I think it gives everybody a voice and I think you find that the best, naturally filter to the top. I’m a very big fan of Rumi Neely of Fashion Toast. So, even though anybody can go out and start a blog, only really talented people tend to make it big.” She talks about how blogging is a “self-regulating” and “self-filtering” process which is, in essence, the same as any other media but that at the end of the day, “The cream always rises to the top.”

At this point, I am really struggling to keep balance and inquire on what shoes she normally wears for her style safaris. I ask her if she ever wears heels and she begins to laugh. “No! I never, ever street style hunt in heels. In the winter, I wear these knee high boots, [they] are like my trusty- I always have these on if there’s any snow on the ground. If the snow is gone, I just wear my Chucks, but [you] will never see me in heels because I have to be able to run after people. . . [it’s] very athletic. It’s kind of like a sport, I guess.”

“It’s kind of like a blood sport,” I say and she agrees.

“It’s like hunting! I’m telling you, it’s like a form of hunting! You have to dress the part. You can’t be running down the street in stilettos trying to reach somebody or else you’ll lose!”

Look for Part Two of this interview on a Special Edition of The Indumentarian tomorrow and until then:

Don’t be a stranger, but do be stranger.

Thanks to Amy Creyer of Chicago Streetstyle