It’s not surprising if at first glance, your eyes overlook the hidden gem at 18th Street and Sangamon. However, if you look a little closer, beyond the old brick warehouses and dilapidated train rails, you’ll find that a retro chic, newly established thrift shop sits confidently among them. Its name? REX Recycled Fashion. 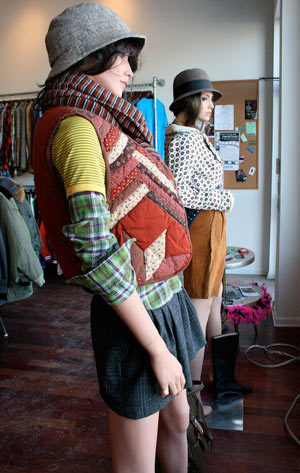 “A lot of people pass and say they see it but they never come in,” says owner Alexis Mayoski, as her eyes wander admiringly around the store. “I don’t know if something intimidates them or what, but when they come in they say it’s friendly and nice and warm in here. The prices are good.”

“The prices are good” is an understatement. Unlike many thrift shops that exist on the North Side of the city, REX’s prices are and remain affordable. It’s part of Mayoski’s philosophy of providing her customers with great clothes at reasonable prices. She handpicks every item she sells at the shop, never picking anything she herself would not wear. Items can range from the ever-popular Members Only jackets to more classic vintage pieces.

“Everybody says it’s so random in here,” Mayoski says with a giggle. “They say I pick the weirdest things because they’re just so different, but I like a lot of sparkle and sequence and just colorful, out-there stuff.”

The 23-year-old’s interest in fashion began at a young age and has evolved as she’s gotten older. She’s a recent grad from Northern Illinois University where she majored in Textile, Apparel and Merchandising. She also interned and worked for Knee Deep, a thrift shop not far from REX.

“Working at Knee Deep encouraged me and gave me the confidence to open my own shop,” says Mayoski. “I’ve always wanted to do it and I was always just scared but I finally said, ‘I’m just going to try it out.’ You never know until you try something.”

The encouragement also came from Mayoski’s boyfriend, Ruben Gonzales, who is part owner of REX. A Northern Illinois University business grad, Gonzales handles the finances and marketing of the shop while Mayoski concentrates on acquiring the clothes. The combination of both of their talents ensures that everything runs smoothly. Oddly enough, the name REX is also a blending of both Gonzales and Mayoski, who took part of their first names (R for Ruben, EX for Mayoski’s nickname Lex) to make up the name.

Although the shop has only been opened for six months, Mayoski has already established regulars. The bustling crowds of Halstead Street’s art walk, as well as young Pilsen locals, have helped her establish a steady client base. She often recruits family and friends to model clothes from the store and pose for advertising posters that she posts around the neighborhood. The posters, along with artwork and graffiti influenced from the neighborhood, line the walls of the shop, adding a distinct, local vibe to the space.

But advertising or not, it’s the clothes that will make you want to come back for more. “I feel like if you’re going to look for something basic then you would just go to Target or Forever 21,” says Mayoski. “This is more different, if you’re looking to be different.”

One thought on “Out With the New, In With the REX”