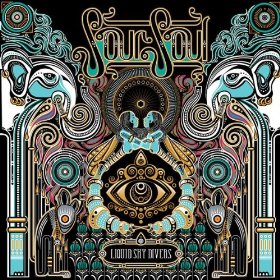 If the Beatles and Phish tripped out on acid while on the road together and had an orgy, their collective orgasm would be this album. The debut release Liquid Sky Divers by Sour Soul resonates as a classic rock album with a little bit of pop and lot of soul. Sour Soul, in fact, stands out as a more jamband variant of the Beatles. However, Liquid Sky Divers is what the Beatles might have sounded like if they’d actually been from the Americas. The roots of rock ‘n roll, rhythm and blues, jazz and neo-soul, drip from these boys fingertips.

Proudly coming from México, Sour Soul sounds more American than most American pop. Their adept English lyrics with a faux-British flare is indelibly understood as their Spanish accent translated through soul. Liquid Sky Divers rings as an unabashed homage to those long lost psychedelic days of the 60’s and 70’s with contemporary vigor.

The album has an air of youthful enthusiasm for life, love and its many follies while its tempo and precision hit with maturity. These are no teeny boppers tinkering with toy guitars, but boy do they look pretty. “Will Go On,” delivers the most soulful rendering of funk and grove rock imaginable. Marco’s glassy and halocinatory vocals gives a whole new meaning to “high” pitched. The ethereal and lilting conviction in Marcos’ voice is alluring and arousing. The entire album is rife with sexy subject matter and billowing bass guitars. Try not to swoon over these tracks too much.

The music starts up after a little bit of artful intro… be patient you sound bite boys and girls.