For years I lived alone. I answered to no man (except the landlord) and generally lived in solitude, the silence both comforting and at times almost claustrophobic. When my lease was up, and it was time to move on and get some new digs, I also wanted a roommate—someone to rattle around and make some noise to let me know there’s life going on outside of my office and work place. So I got a roommate, one of my best and closest friends since high school. Let’s call him Sammy.

Two guys living together should be easy. Come on, we’re guys. If we have beef, we quash it.

At least you’d think that.

The other day we had a blowout. The problem is that neither I nor my roommate really go out. We’ve been cooped up in our apartment just getting on each other’s nerves trampling over imaginary lines in an imagined sandbox. In an effort to get back to being the dynamic duo we once were, we hit the highway and headed downtown.

After a little back and forth about where we should get started we found ourselves looking for parking around Clark and Division. It was around ten o’clock and the Viagra Triangle was awash with the chaotic madness of a Friday night. We made our way through the drunken arguments, police clusters, and stumbling college kids on the cracked pavement of Division and somehow made our way into The Lodge.

As unremarkable as The Lodge is there are a few qualities that keep me coming back these many years. One is the fact that it’s open until three in the morning on weekdays and even later, depending on which weekend night you go on. Another very rare quality, especially on Division, is that I’ve always been able to find a seat at the bar. That’s important to me. I’m not a savage. I prefer to have the ability to sit down and sip my cocktail instead of leaning against a wall somewhere or even worse in the middle of a crowd where I usually end up wearing a good healthy part of my drink. 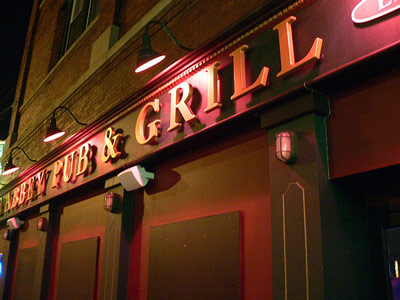 At the bar Sammy with his Blue Moon and me with my bourbon sat while eyeing a small group of girls sitting down the bar from us. Sammy looked a little uneasy as he sat self-soothed with each sip of beer.

“Dude, what the fuck are we doing here?” he asked.

“We came out to do something. I could be sipping a beer at home,” Sammy continued.

“Well then what do you want to do?” I asked.

“I dunno. See some music, meet some fucking girls—anything but sit around here doing nothing.”
With that we were out the door and headed to The Abbey where Sammy was sure we would see some live music and even more importantly, meet some live women.

We were wrong. Not only were there almost no women among the maybe fifty people, the live music was just some asshole behind his computer playing some kind of bass-soaked dance music better suited for a rave then the empty Abbey. Bar hopping is a crap shoot, and it’s a good thing there are a lot of gin joints in this town so you never have to be married to one. We stood about all we could stand and hit the street once again in search of a bar to call home for the night.

It was a little early to head home, and it was also just late enough to consider the option. So I suggested Greektown. After all, I used to work around there and still know a few bartenders.

We parked on Green and made our way to Jackson and Halsted to Greektown Gyros. As soon as we entered the door I saw George behind the bar. As we sat down at the bar I was half sure George wouldn’t recognize me until I saw him grab a bottle of Dewar’s from behind the bar and pour my usual.

“Thanks George,” I said. “Wasn’t sure if you recognized me.”

“How the hell could I forget a face that ugly?” George replied.

We sat and chatted with George catching up on what had been happening with a few people I know while Sammy eyed potential female targets from his stool. We drank for a while and decided to get something to eat. The best thing about Greektown Gyros is that you can order your Gyros from the bar without having to go to the adjacent room and order at the counter.

Sammy and I ate in silence and had a few more drinks, paid our bill, tipped George well, and decided to head home.

As the skyline faded in back of us while heading down 290 Sammy and I chatted away. The fences were completely mended. Maybe it wasn’t the most exciting of nights, but we did get a few drinks, talked to a few girls, and had wonderful gyros. Sometimes that’s the best you can hope for.