Gozamos: Hola, Christopher. How was the show at V Live?
Christopher Uckermann: It was great. 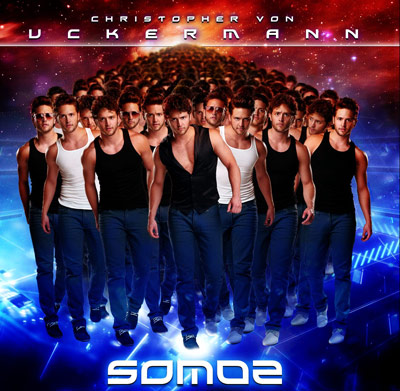 Gozamos: Last person I saw there was Julieta Venegas.
CU: Oh, she’s good. I really like her.

Gozamos: So where are you going next?
CU: I am heading to Mexico City. I am going to see my family and for a promotion.

Gozamos: That’s a wild mix (both laugh) with different cultures and everything.
CU: Yeah.

Gozamos: I love the cover of your new album Somos. The filmed you in different shots?
CU: Yes, It’s Somos, as you know, means “we are.” So it’s a very powerful word, that’s why I chose it, like we are the people, we are one.

Gozamos: Are you nervous about doing solo stuff after the safety of the group?
CU: Yes, I am nervous but I am happy, because this is my project. I wrote all the songs. I had the chance to work with great producers and composers. This is my baby, my project.

Gozamos: Are you going on a bigger tour?
CU: Next year, because the single is on the radio right now so I need time.

Gozamos: Do you still want to act?
CU: Yes, I just went to Colombia to shoot the second season of the Fox Original TV series K’Dabra. I did a couple of songs for the television show was well.

Gozamos: That’s perfect. So where do you see yourself in the future?
CU: Well, music definitely. I want to do movies also in the American market.

Gozamos: You currently live in Mexico City?
CU: I do.

Gozamos: Well, you can always come back to Chicago!
CU: I will. I love Chicago. It’s a great place. I go to LA a lot of the year also, about four or five months.

Gozamos: How do your fans keep up with you?
CU: My Twitter is ChristopherUck for the fans.Tell the people to take a chance and listen to Somos!