December 12th is a big day for Mexicans and Catholics all over. What was once a holiday only celebrated  in Mexico has become just as popular here in the U.S. as well as in Latin America. This is the day Catholics celebrate the Virgin Mary. But why December 12th? The story goes that on December 9, 1531, the image of the Virgin appeared to Juan Diego on Tepeyac Hill in Mexico City. Like Diego, the Virgin was indigenous with dark almond skin. She spoke to him in in his native tongue Nahuatl and requested that a shrine be built on the hill in her honor. Diego told the bishop about his experience, but the bishop demanded a sign. Three days later on December 12th, the Virgin reappeared to Diego in the same location. She asked him to collect roses in his cloak. He obeyed and returned to the bishop. When Diego opened his cloak, an image of the Virgin was imprinted on it. Today that very cloak is displayed in the Basilica of Our Lady of Guadalupe in Mexico City. It has become the most visited Catholic shrine in the world with approximately 18 to 20 million annual visitors. The Virgin of Guadalupe is one of the most revered images in the Catholic religion. Catholics also call her Queen of Mexico and Empress of America. 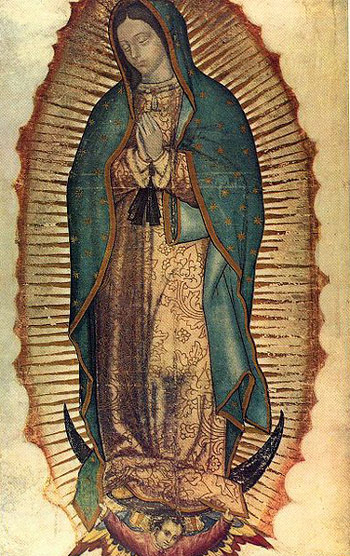 This beloved legend does not exist without some controversy. Some anthropologists believe that the Catholic Church fabricated the story to convert more indigenous people to Christianity, in particular, by co-opting the symbol of the Aztec goddess Tonantzin into the Catholic symbol of Our Lady of Guadalupe. Other historians believe indigenous people themselves made up the story in order to secretly continue to pray to their goddess.

Regardless, El Dia de la Virgen has become one of the most celebrated holidays in December for Catholics. In Mexico the festivities begin at sunrise with a mariachi serenading the Virgin with “Las Mananitas.” The festivities do not end until the third day at sundown. In these three days of celebrations there are masses and feasts. Aztec dancers fill the streets, and bells are rung by the people walking around the city in remembrance. Mariachis croon, and nights are filled with vigils.

The Lady of Guadalupe has turned into a national symbol for Mexico. We seem to always recognize the image of the Virgin Mary displayed with her hands open to us all. Whether holding her hands open beside her or cradling baby Jesus, on December 12th Catholics recognize that she is just as important to remember as Jesus. So on this day why not go ahead and light a candle for La Virgen de Guadalupe?