“She’s found herself! She’s being empowered!” argued the psychoanalyst and mother with her daughter standing near. I wasn’t so sure, so I kept on. “But I think there’s something hostile about the way her face is depicted; she’s virtually gone.” What ensued was riveting and honest discussion about what photographer Gabriella Grech captured in her piece “Confusion II” at the exhibit “Women and Women” at Instituto Cervantes. 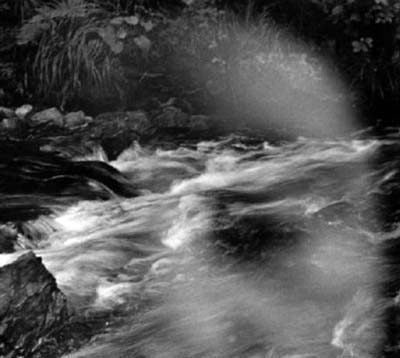 Named after the famous Spanish author of “Don Quixote,” Miguel de Cervantes, Instituto Cervantes opened its doors in 1996. It’s part of an attempt by the Spanish government to make the language and culture of Spain accessible to not just the US but to the world. They’re succeeding and boast 60 centers in four countries. After attending opening night at a photography exhibit they hosted – “Women and Women” – I see why they are so successful.

Flanking either side of a long hallway you wish would go on forever, twelve substantial photographs hanging on the walls depict the female form. This journey of examined femininity begins with what might be the most recognizable abstraction of a woman’s body, the hourglass. I found this a humorous and effective way to pluck the strings of attention. By the end of the hallway, familiar forms of women give way in unexpected ways. Such a strategic evolution is curated by a woman and photographer in her own right, Blanca Berlín.

Helping along the art-filled path is the Associate Director of Performance Programs for The Museum of Contemporary Art in Chicago, Yolanda Cesta Cursach. “A painting has the unique ability to feign something that the painter may never have seen in real life, but the photographer insists on a singular necessity of the subject being photographed to have had existed in some form,” explained Dr. Cursach.

The notion that these women are not real is not up for dispute. Rather, Dr. Cursach’s words point to something often lost by obviousness: that there’s a photographer involved, that there was sweat and lighting and bathroom breaks and maybe music playing in the background and maybe even tears shed from the first flash to the final frame. The messiness of being human is made very accessible with photography more so than with other artistic rendering because it’s rooted in this reality, this realness.

We’ve all had our picture taken. We’ve all suffered from having our eyes closed to double chins and bad hair as well as having a side of ourselves captured that looks so good, we grow unfamiliar with ourselves in the best of ways. Such energy is harnessed with “Women and Women” and makes out of the familiar something very worthy of your time and attention.