I’m fairly certain that when my friends see me with a camera, they cringe. It’s not that I’m a horrible photographer that manages to frame everything but the subject’s head in my photos, or one of those jerks that strives to capture them at just the right unsavory moment, like mid-sneeze or with a biting into a foot-long hot dog. It’s that they know once I eternally capture their souls on my Nikon, it’s there that those images will stay forever. My friends will never see those pictures, and those little portraits of the best years of our lives will forever sit in some sort of memory card purgatory, never to be enjoyed in their frame of glory or screen-saver of destiny.

I’ve known for awhile I had gotten bad at sharing my wealth of photos. I used to be great about uploading my images to my Webshots site back in the day and, later, diligent about making an album on Facebook but that was back in my college days. It was back when it was still called THE Facebook and I had more time on my hands than a drunken twenty-something should have in the middle of a cornfield.

I came to terms with just how bad I had gotten recently while putting together a video montage of pictures to be played at my grandfather’s memorial service. As I scoured the various flash drives, memory cards and hard drives stashed away in our house for any pictures I had with him, I noticed how many pictures I had been hoarding that no one had ever even seen. Like the ones from the last time my grandpa’s brother from Texas had come to visit with his family. My mom’s camera had run out of battery, and I just so happened to have my camera in my purse that day. At my mom’s direction I snapped candids of my grandpa and his brother, who have now both passed away, cooking out with their families at my grandpa’s house. Neither of them ever got to see those photos and, to be honest, I didn’t even remember I had taken them.

I decided I can’t let a situation like that happen again. I know that is a more extreme case, but really, what is the point of me lugging around a camera, stopping whatever I’m in the middle of doing to take it out, gather the people I’m with and frame a nice shot if I’m not even going to look at those pictures again? I could start uploading albums onto Facebook again but, let’s face it, there are some pictures I don’t necessarily want to share with my younger cousins, aunts and co-workers now that the site is open to more than just my college inner-circle. Plus, I have a flair for the creative, so putting them online with some half-thought out caption doesn’t really cut it for me anymore. 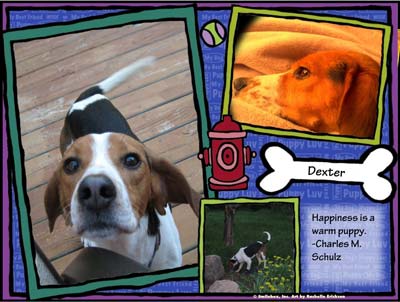 I happened to stumble on digital scrapbooking awhile back and I thought maybe it could be the answer I was looking for. It looked sort of similar to the actual physical scrapbooks I used to make back in middle and high school, but without having to do all of the tedious (not to mention costly) compiling of stickers, papers and embellishments. It also lacked the mess of paper scraps, sticker backings and all the other odds and ends that seem to appear at the end of a page making session. Clean and computerized? One point for digital scrapbooking.

I also liked that I could share the images online if I wanted. While I often harp on Facebook, Webshots, Flickr and all of the other sites that put my images out there for anyone to see, that is kind of the point: anyone, anywhere can see them. Which comes in handy when you have a brother living in Korea or friends living 100 miles away and you want them to see a montage of the debacle that was your first home Bears game. But I could also print out these pages into a bound book if I wanted, which works out well since Grandmas’ not hip to the web yet. In fact, some of the sites I found for printing out such a book had design software integrated right into the site, so there was no need for the professional grade software like Photoshop or InDesign. 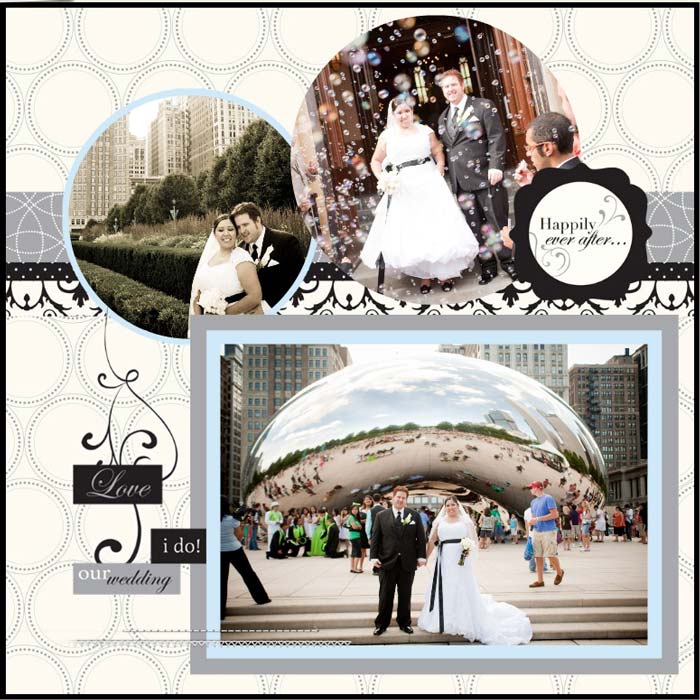 For my first go-round, I wasn’t ready to spend the money on a book just yet. I just wanted to try my hands at a few pages and see if this could be an option for me. I decided to try out a program that was branded as quick and easy, Smilebox. Once I loaded that bad boy on my laptop it worked just as promised. Pick a theme, pick out some photos and- bam- you’ve got a scrapbook page. It wasn’t super customizable, but I could adjust the colors on the layout, add or remove embellishments and include my own text as well. Perfect for me, since I was just looking to get my pictures together in something that was more interesting to look at then a bland web page. I put together a couple of pages of pictures from my wedding, which I plan to eventually publish into little hard-cover books for my parents and in-laws. You know, one of those little brag books I was too cheap to add to my wedding photography package. I also threw together a few pages for the newest member of our clan, my cute little beagle Dexter, just for fun (and because he’s the most photogenic dog of all time. No, I’m not biased). I suppose if I ever wanted to get crazy about it, I could design pages with backgrounds and embellishments I had designed myself instead of using the generic layouts from the program. Baby steps, people, baby steps.