Gozamos is celebrating Day of the Dead 21st-century style! We invited our contributors to share digital ofrendas, or offerings, to honor the memory of family and friends who are no longer with us. Some mentioned specific artifacts that reminds them of the deceased.

My grandpa just passed away last month, so every day I still see, hear and smell things that remind me of him. But one of my favorite things about him was his love for hula girls. Before I was born, my mom used to take my grandpa to a luau that her company would throw every year. He absolutely loved them, so much so that when I was about six months old my parents, grandparents and a couple of my aunts all took a trip to Hawaii. It was my first time to the islands that I would later fall in love with and visit many times. This picture is one of my favorites, with me in my first muumuu on my grandpa’s knee in Honolulu. Later in my childhood, my parents would take my brother and me to Hawaii every few years for vacation; and every time we went, my grandpa would ask us to bring him back a hula girl. He had one on the dashboard of his truck, and some would even make it onto the mantle over the fireplace. 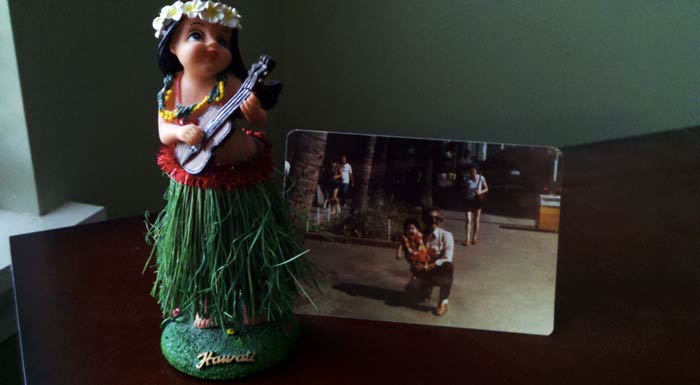 I made this last year for my good friend Leonel Macario Hernandez-Reyna. We went to Northwestern together. I was an undergrad while he was a math grad student. He introduced me to our Spanish rock radio show “Sabor Latino” at Northwestern’s WNUR 89.3 radio station. We hosted the show together for several years, and he was a great friend. He was killed in a car crash on December 28, 2002. He was sweet, insightful, well-spoken, caring, and eloquent and passionate about his math degree. I created this small altar for him last year. 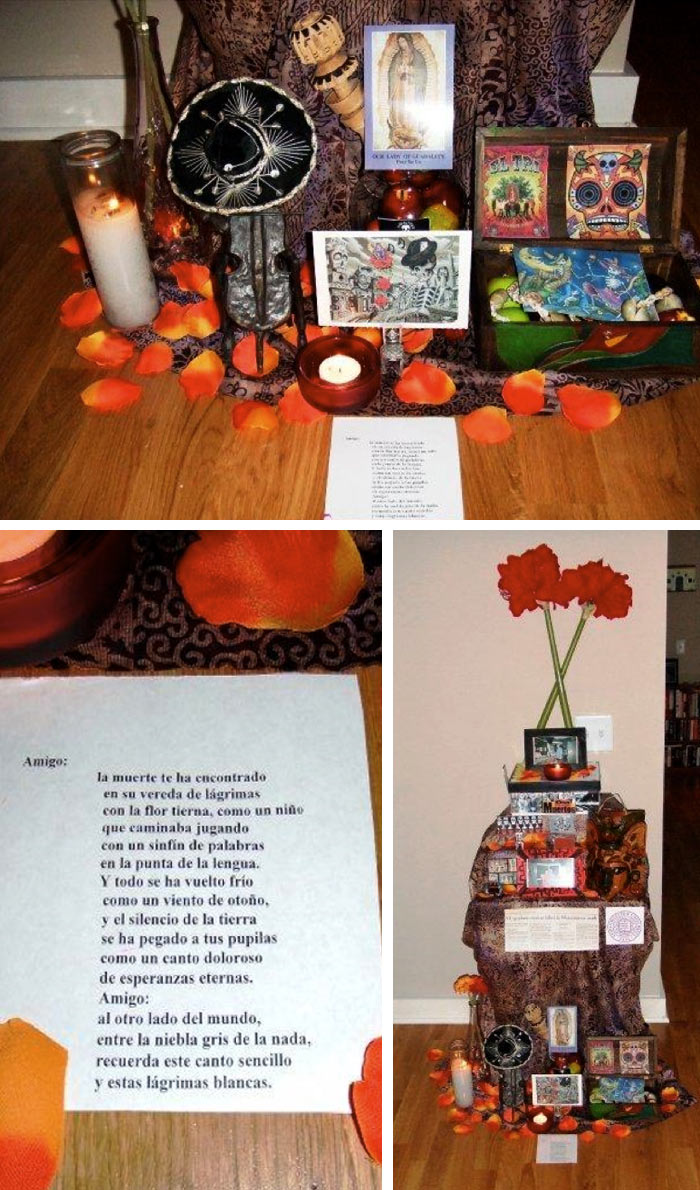 This is a picture of my grandmother, Gloria Donbavand. She’s got that huge smile (a lot of people say I have that smile too) because she had just gotten engaged. My grandfather asked her to marry him while they rode the train back to Brooklyn. Isn’t that romantic? Every time I take the F train, I think of her. 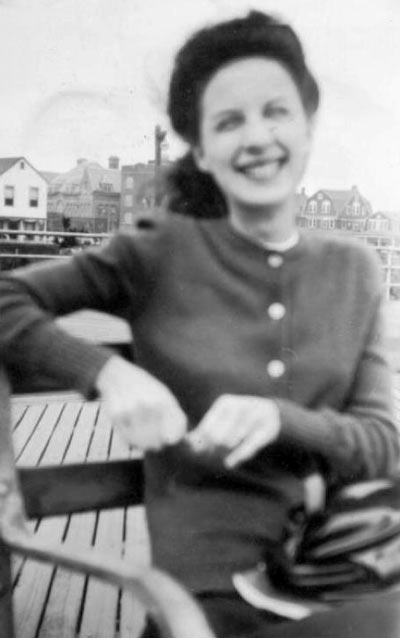 Communication is the art of trying to relate ourselves to other people, and success is almost always sufficed rather than achieved. As rare as it is to truly experience someone else effortlessly and completely, such a bridge between members of different generations is truly special. I was lucky enough to get such a moment on a sunny day around fifteen years ago. My friend and I were playing baseball in my backyard. As far as we could tell, the only thing big-leaguers did was throw, hit, and spit, so the two of us were spitting constantly and all over the yard. My grandfather rose from his lawn chair at the edge of the grass and knelt to my ear with the soft admonition: “Good boys don’t spit.” Embarrassed, I immediately stopped spitting.

This is one of the most fulfilling memories life has given me. I cherish it in the retrospect that my infraction existed entirely within the confines of the world as he knew it. That moment held no shadow of the generational divide that would soon wedge between us before he was gone forever. The times that I fit my youthful stereotype and thought I knew more than him were numerous, but when he died, the only memory I wanted to keep was the one where he fully knew me and what I was trying to be.

I have to this date, never met a bigger Pink Floyd fan other than my father. Watching “The Wall,” or listening to “Dark Side of the Moon” among any of their other songs provides vivid images of him. His favorite, “Have a Cigar,” is one close to me, being that for a long period he was an avid smoker. I have to admit, I owe my dad a lot for enriching my musical selection up to this date. It’s one of the many things that keeps me close to him. 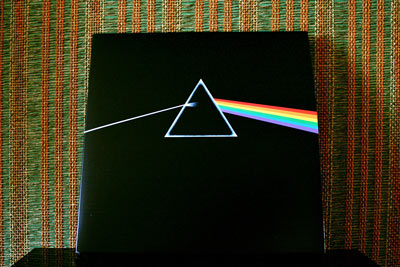 There’s this image stuck in my head. A rockabilly-babe gone housewife is dragging a decent-sized Christmas tree by its stump along a fiercely snowed-in Chicago street. The branches collect slush from being dragged all the way to her Southwest sub-urban apartment. Midway jets roar overhead. As Carolina comes in through the living room, the wind pulls in the crisp December air. “Jingle bell, jingle bell, jingle bell rocks,” one of the boys says cheesily to his exhausted mother as she arrives. She smiles sarcastically and starts ordering the boys to give her a hand. She slowly sheds the pounds of winter garb as if the load of urban motherhood were as easy to bare as that branch she slugged along the street for these kids… my tias and tios, but technically 2nd cousins.

I didn’t really know my Tia Carolina very well. All I know of her is that she was a light-skinned, 3rd or maybe 4th generation Mexican-“American.” She was old-school with plastic-covered couches she thought would help preserve their value. Her hair was white, always bouffant and her make-up? An inspiration for Nylon Magazine. Tia Carolina was always in elegant neon’s and metallic-70’s acid trip rock and roll.

One time, I pet their cat, and one of my eyes starts swelling up. Tia Carolina steps in with a seriously sweet-home Chicago remedy. She grabs my face with her right hand and tells me to stay still as she holds my eye open with her fingers. She slowly takes a drag of the cigarette in her left hand and blows the smoke straight into my face. Right into my dry and red eyes. My eyes welted and eventually the redness stopped, after the sting of cigarette smoke, and my sudden coughing fit ceased.

That’s the kind of woman she was, a pencil cigarette perpetually balanced on her freshly lacquered nails, and a raspy voice that refused to scream over disobedient children or irritating men.

Her husband, my Tio Honorio found a new friend since his beloved wife passed 3 years ago to lung cancer. Leaving from yet another family get-together, Tio tells me, before putting on his freshly linted suede jacket, that Spenser, his new pekingese pooch sleeps with him. He jokes about his wife in broken English, but confides memories like spontaneous Spanish secrets.

He says Spencer runs around the house looking for his wife. I’m confused, maybe he’s getting old or my Spanish is rusty, but in the haste of our departure, he tells me he misses his wife through strange analogies to warm beds and laughter.

“Adios Tio,” I smile, with my awkward, is-my-Spanish-good-enough despedida. And I hear Christmas around the corner in the cold wind rushing in from outside as the family leaves and closes the door behind them. 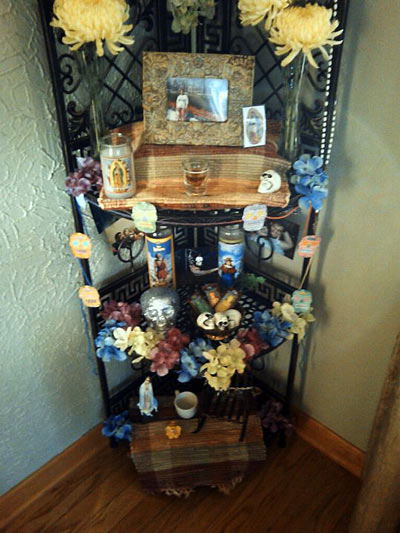 Most of my artwork is intuitive, meaning I have no specific assumptions for what I am creating, but rather my hands roam free and record struggles, frustrations, and emotions at the moment of conception. The Day of the Dead is a time of deep reflection on my departed relatives. While death is a way of transcending to another stage of life, it is also a celebration because it brings families together to remember and pay tribute to their departed relatives.

Upon my arrival to the United States in 2000, I started new in Chicago and left behind 15 years of life in my native Jalisco, México. The most moving memory of my departure is el último adiós (the last goodbye) to my abuelita María Tejeda de Jiménez.

…I remember vividly being on my knees in front of an altar of La Virgen de Guadalupe she had created in the living room, as she was giving me her blessings; she hugged me tight and slid $50 into my pocket. She said to me “be good and help your parents, they have worked hard for you and your siblings’ future ” Tears started to travel down her cheeks as she was praying Padre Nuestro, and it was hard to keep myself from crying. After our last goodbye is when my journey began. Now I welcome my abuelita to Chicago with this ofrenda, making her feel at home. 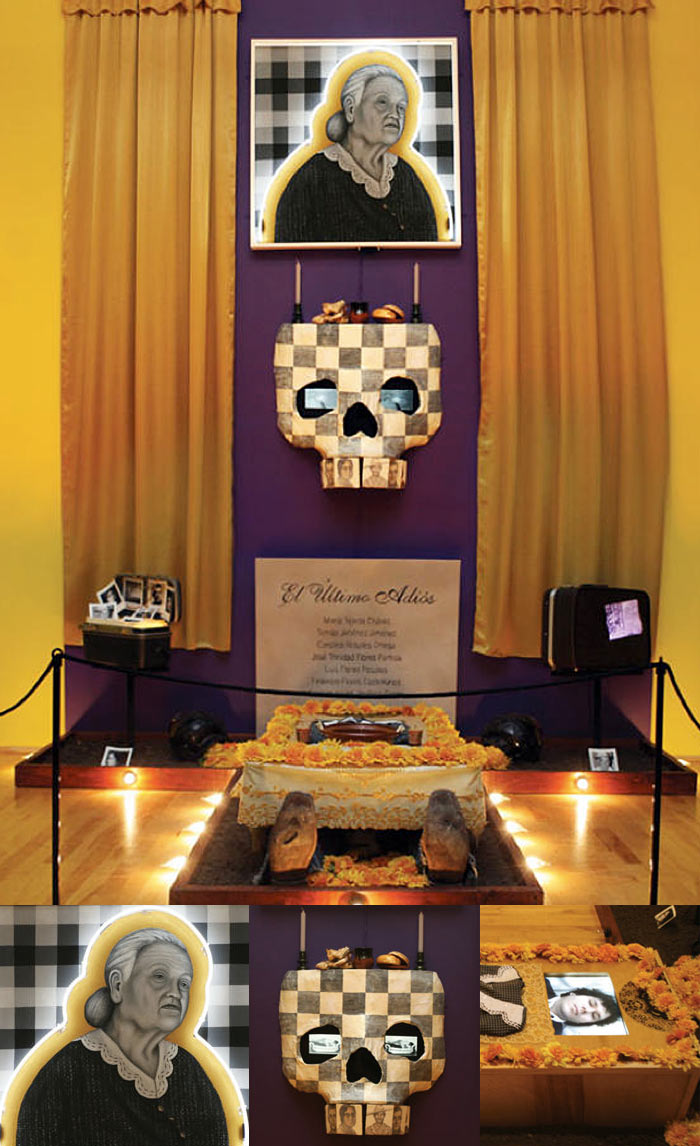 Jamie Lynn Nuffer (New-fur…she’d want the phonetic there) was born September 18th, 1981 and passed away May 2, 1998 in a car accident. Speeding as teenagers often do, she over-corrected when the car veered off slightly onto the shoulder of the road. Of course, when you’re speeding without wearing a seat belt, there’s no such thing as slight. There’s no such thing as a slight broken pelvis, a slight punctured lung, and a slight-looking bump on the head. These invisible and slight-looking signs of harm were too much for her little body to handle. We donated all her organs about a day later.

My sister was very silly. When she’d laugh really hard, her true laugh would come out, this saw-like howl. I actually remember the last time I heard this sound. It was one sunny day after tackling her to the ground and grabbing her sides. She was quite a bit smaller than me, and we were both used to her provoking me and me retaliating in return with a punitive tickle. Aristotle believed that a baby was born without a soul until the day came when the baby would have its first laugh. It was only until then that the soul would be inhaled and its presence known to the world. My sister’s laugh had this sort of quality of soul. I’ve never known the sound of its equal.

I think of her often as she was supposed to be the one to settle down early, have kids, and pass on this wonderful and strange sound of joy that resides dormant most of the time in my own genes. 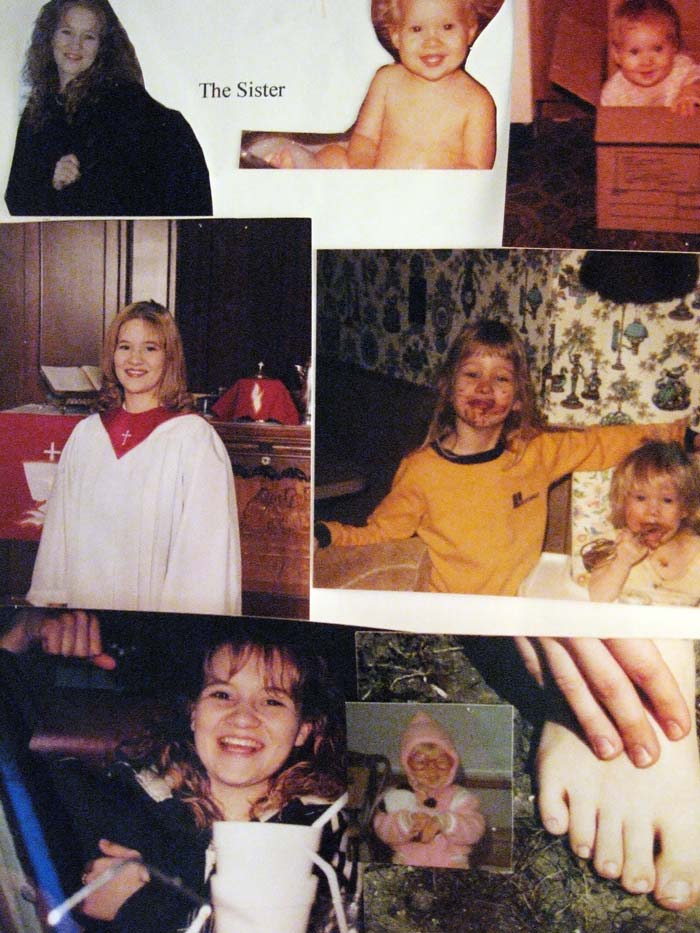 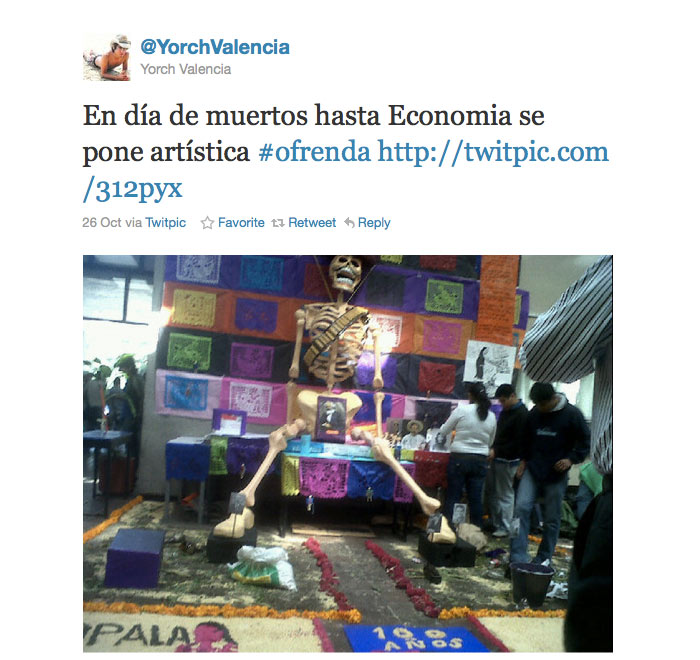