Jim and Jason Ebel’s whirlwind romance with beer began while spending time in Europe. Upon their return, their love for liquid bread did not wane. We sometimes forget, with the saturation of local and craft brew on the scene now, that good beer wasn’t readily available in the United States 15 to 20 years ago. Therefore, Jim began homebrewing in the hopes of replicating his favorite European styles. Hoping to spread the word and share the hobby with others, both Jim and Jason opened the Brewer’s Coop in Naperville, IL in 1993.

In 1996, Two Brothers Brewery was established as a 15-barrel system based on the 3-vessel, traditional German system. This has grown to an 8,000 barrel fermentation capacity in a newer, larger facility. The public wanted beer and the Brothers obliged.

The brew-pub, located just off the brewing facility, seems a little out of place in the the industrial park that it calls home. There are no large signs or awnings indicating that the brewery is anything but another large factory. My suggestion, keep an eye out for the huge dairy milk tanks in the parking lot (generously donated by Grandpa Ebel).

The pub carries all of the breweries mainstays including Domaine DuPage, The Bitter End (a personal fav), Cane & Ebel, Prairie Path, Ebel’s Weiss, and now the Long Haul and Resistance IPA. While I was there, I was able to enjoy the Atom Smasher, an Oktoberfest-style beer fermented in oak barrels. The beer is malty, caramel-y, and comes in at about 7.7% abv. For you science geeks out there, the name was given in honor of the Fermi Accelerator located only a few miles from the brewery.

When it comes to the Tap House’s food, the menu is simple and brief. The food is made by Chef Tommy, who offers a unique, gourmet take on bar food. Sure you have your nacho appetizer, but you can also enjoy a taste of España with the Queso de Cabra,  goat cheese dip. My usual pick for the appetizer is the artichoke crab dip and bleu cheese sauce. It’s served piping hot with wedges of toasted french bread. Vegetarian dishes are available as well as organic, beef burgers. One of my favorite things about the entrees: you can sub-in sweet potato fries for your side. Awesome. 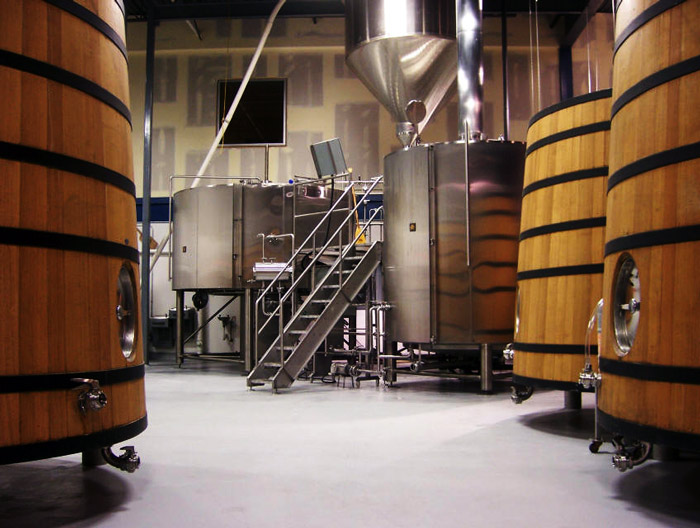 If you are interested in a brew house tour, they are available every Saturday at 1PM and 2:30PM. They last about 45 minutes. You get to check out the inner workings of the brewery and ask them all of your burning questions. The tour is free and comes with some samples of beer or soda. Large parties should call ahead.