Big shoulders, lots of wind, and now sprouting in art: Chicago. My love affair – because I refuse to settle for anything but love – with this city abruptly started four months ago when I moved here.  Unfortunately, the spring of love doesn’t include an innate sense of direction. This can make the Loop a perilous loop indeed, especially as I attempted the first ever Chicago Art Loop Open…by myself.

Armed with my own map surreptitiously hand-written in my moleskin book, a gesture of stealth I thought would spare me precious scraps of dignity I’d be hemorrhaging while lost, I ventured forth. TheWit Hotel was my first stop. Bolstered by my well-executed navigational prowess (re: Moleskin and luck), I burst through the doors and stormed the lobby. Nine pieces of art were waiting for me. Like Narcissus noticing his own reflection in the water, I was going to notice art.  Perhaps out of the corner of my eye would come this image. Or maybe I’d have to take a number and with all the fanfare of deduction, arrive in that holy place of Next. Instead, I was looking for Waldo.

The lobby of theWit is incredibly lavish and modern. Colors, textures, function – they all vie for your attention and win. I eventually had to forget dignity and just stand and stare. There were several suspicious items but nothing unimpeachable. With a lull in hotel traffic, I approached someone behind a counter for assistance. He pointed up, and we both looked at a curious chandelier. Then he pointed to a room to my right and said most of the pieces are in there.  Before I could ask where the rest of the art resided, he was helping an actual patron of the hotel.  I lost my pluck and ambled into a dark room featuring an ATM built into a wall and a bunch of framed pieces huddled together. 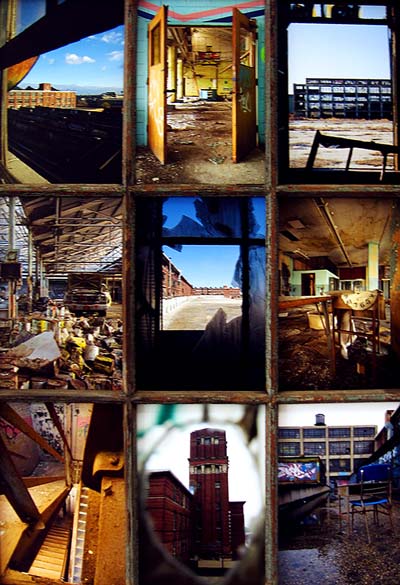 My eyes adjusted to the dark, my ears to the quiet, and the rest of my senses to that place you enter when you’re about to kiss someone for the first time. Just as I was taking a step closer, a man-like-a-linebacker bumped into my shoulder.

“No, no. It’s me. I’ve never seen such a beautiful ATM,” I responded. He was kind enough to give me a chuckle, but he was busy and went on his way. Once again, I made my approach. It was there that I had my first experience of insatiability, where I wanted to stare forever at something I can’t quite make up my mind about. It was such a relief and buoyed my spirits as I returned to the streets. Venue after venue, I wrangled my way to the frames and installations. And then I saw him.

Like a heavenly body ready to explain to me the language of something greater than anything a mere mortal should understand, one of the artists stood in a quiet corner of the herculean Block 37. By this time, my senses were in shreds including my sense of self as it reconstituted with each piece that moved me so. The hyperbole, then, was not so hyper.

Giovanni Arce has been standing at attention for his art since the pieces went on exhibit on October 15. Day after day for an average of six hours a day, he offers himself as an extension of his art. Entitled “Bush,” it’s a pixillated portrait of George Bush done in acrylic on 600 toilet paper rolls. An exercise in the medium making as much of a statement as the final rendering, this piece was arresting and intellectually chewy. No matter how far away I stood, I couldn’t get the image to sharpen. The message was intoxicating to me but Gio’s words were just as compelling. He spoke of some of the controversy associated with the Art Loop Open including notes of intrigue concerning venue selection and the unfortunate occurrence of a disqualified and then re-instated artist.

I walked away feeling a fullness I hadn’t anticipated. As if the venue itself was punctured with the presence of one of the artists, so too, were my thoughts about the art event. Real money – $25,000 – is at stake that could change the life of the winner, a quite-possibly starving artist.  Thoughts of gentrification and the creative culture spilled into my mind. Why wouldn’t there be controversy? I spent the rest of my self-guided tour weighing the gravity of it all, including gravity itself as I covered yet another venue. It felt so good to be finished.