I was born to game. These fingers were made for button mashing and analog joystick toggling, so that’s just what they’ll do. The first game system I remember having was the Nintendo Entertainment System (NES). I still remember getting the NES for my birthday when I turned 6. Man, I wanted that NES so bad. A couple of the other kids on the block already had it. They’d show off and play Mega Man and brag. Every time I went to their house I’d have to watch them play. I’d have to sit down and wait until they got bored just to get a turn. That’s a frustration that makes you want to take a rectangle controller and dent someone’s forehead in. I got so tired of seeing everyone else having such a blast. I’d put notes on my Mother’s bedroom door to remind her what I wanted for my birthday. I’d clip out pictures of the NES from the Toys r Us catalog and magnet them on the fridge. My birthday finally arrived. To my surprise, I only got what looked like a bunch of clothes packed in a Ventures bag. I dug in that bag only to be stunned. My eyelids peeled back. All I could do was scream like a baby out of the womb. Disguised in a bundle of clothes was the NES itself. This was only the beginning of an almost 20 year love affair.

The NES came bundled with Super Mario Bros and Duck Hunt. Did I forget to mention it came with the NES Zapper? This was a cool plastic gun you aimed at your TV screen to gun down those troublesome ducks. Hands down the fondest moments of my childhood come down to trying to beat Mike Tyson’s Punch Out. Can you imagine a roomful of children screaming at a TV screen, trying so hard to knock out Tyson? Memories of punching King Hippo in his big old gut still echo in my head. Then not too long after that came the Sega Genesis. This sleek black console seemed to offer what Nintendo could not. A more mature experience to gaming. Sega seemed more like counter culture and Generation X, while Nintendo was more Disney. This was even truer with the release of Mortal Kombat. While Nintendo offered a more tamed version of the game, Sega had the blood and the gore we salivated over. (Ed. Note: ABACABB!) While Mario kept his cute pace, Sonic promised to take us to the limit. Even today I can hear the theme of Dr. Robotnik ring in my ears. I could sit here forever listing all the game titles that had my young attention but that would honestly take forever. 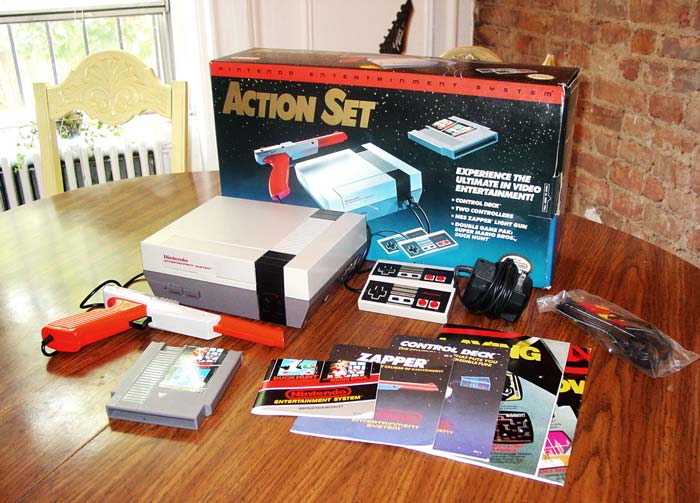 Soon after the release of the fist Nintendo and Sega consoles, video games became part of the household. Just as everyone needed a microwave or VCR, people needed a gaming console. Many failures come to mind that just didn’t click with the consumer. Some of the epic failures were Sega CD and the 32X and Nintendo’s eye melting Virtual Boy. One system however changed how we would view games forever. Sony introduced The Playstation. Games went from two dimensions to three. Many people were a little weary at the time, because Sony had no track record within the realm of Gaming. Also at the time Nintendo had the N64 and Sega had The Saturn (which would prove to be a giant flop). Sony introduced us to content we would never see with Sega and Nintendo. For the first time in gaming history I felt fear as I would from a horror film. The game title that scared the crap out of me was none other than Resident Evil. The mind bending puzzles and shocking moments that creep you out were never seen in games previously. At the same time Nintendo would forever change how you would play games with friends. Long before Halo, only one game gave you sweet satisfaction when it came time to gun down a friend. That game was James Bond’s Golden Eye. This game offered an opportunity to have four players duke it out simultaneously. Nothing was sweeter than having one of your friends die because he stepped on a proximity mine. This game would later be the precursor to how most online multi-player games would come to be. As games became all the same, one game stood out. Metal Gear Solid came out on the Sony Playstation. This game offered a story that could have been right out of a Hollywood film. Never before has a game tested our wits and had us on the edge of our seat. This is what action games should look like. This game franchise would later serve as one of Sony’s many launch titles as they progressed to PS2 and PS3.

As Sony and Nintendo were gearing to upgrade once again, Sega dropped a bombshell. None other than the holy grail of gaming systems: The Sega Dreamcast. This is a one of a kind system that offered some things we had never seen before and will likely never see again. Many say it was ahead of its time. The Dreamcast offered gaming over the Internet and gave you a memory card that also played mini-games. This game console was on the wrong end of a failing company. Unfortunately this would serve to be Sega’s last game console as they later stopped producing. As we once again ventured into more “next generation” consoles, another challenger appeared: Bill Gates and Microsoft decided to get involved in the fight. As Nintendo and Sony strived with success, the Xbox struggled to click with the market in Japan. It seemed the experienced Japanese gamers had very little trust for an American company. Microsoft had to compete with Japanese giants like Sony and Nintendo. Then one game made an indeliable mark on gamers forever. Halo made its debut and strangled us with that multi-player action we hadn’t seen since Golden Eye. As we ventured further down the rabbit hole we now can’t live without game consoles. The Playstation 3 helps win the format wars, as we all now use only Blu-Ray. Sony offered free Blu-Ray with the Playstation 3. This move inevitably beat out the HD-DVD format other companies were pushing. The Wii now allows people of all ages to enjoy games rather than just the typical hardcore fans. The Xbox 360 still remains to be the system for the hardcore gamers, (even with the Red Ring of Death).

Now, whole television networks are dedicated to gaming culture. Millions upon millions have been viewing X-play and Attack of the Show on G4TV for years. These shows offer game reviews and game related comedy. A safe haven for all the freaks and geeks. Even Hip Hop has its own sub-genre dedicated to games. Welcome to Nerdcore. A movement led by such artists as MC Chris, who played MC Pee Pants on Aqua Teen Hunger Force and Hesh on Sealab 2021. A language has also developed from the gaming culture. Often I see popular television shows use many of the phrases us gamers use while we are playing online. Some words are Pwned, Kakow, Boosh, Noob, tea bagging, and spawn Campers. We often use these words during online battles to upset others. The biggest offense of course is tea-bagging your opponent. This is when you obviously crouch down on a dead opponents face, always hilarious. Also Cos-play is a big deal for the gaming culture. Many times myself I’ve geared up like Solid Snake. Cos-Play is basically when fan-boys and fan-girls dressed up as their favorite video game characters at conventions. The biggest convention of them all of course is E3. This is the convention that Nintendo, Sony, and Microsoft make all their major announcements about upcoming games or hardware. To think gaming is not a cultural phenomenon or culturally significant is to be ignorant of a worldwide cultural movement. How many cultural movements can you say are worldwide? Do you think people in Russia enjoy NASCAR, Reggae, or Football? Not likely, but they do love gaming. Gaming holds no prejudice. Gamers come from all over the globe such as India, Australia, Korea, Germany, Iraq, Mexico, Brazil, and Africa. Imagine someone playing Call of Duty online with people that diverse.

That is the closest to world peace we can ever hope to get.